Teaching ability and efficiency of clinical operations are important aspects of physician performance. In order to promote excellence in education and clinical efficiency, it would be important to determine physician qualities that contribute to both. We sought to evaluate the relationship between teaching performance and patient throughput times.

Measuring workplace performance is important to emergency department management. If an unreliable model is used, the results will be inaccurate. Use of inaccurate results to make decisions, such as how to distribute the incentive pay, will lead to rewarding the wrong people and will potentially demoralize top performers. This article demonstrates a statistical model to reliably measure the work accomplished, which can then be used as a performance measurement.

Patient care in the emergency department (ED) is often complicated by the inability to obtain an accurate prior history even when the patient is able to communicate with the ED staff. Personal health records (PHR) can mitigate the impact of such information gaps. This study assesses ED patients’ willingness to adopt a PHR and the treating physicians’ willingness to use that information.

Veteran’s Affairs (VA) hospitals represent a unique patient population within the healthcare system; for example, they have few female and pediatric patients, typically do not see many trauma cases and often do not accept ambulance runs. As such, veteran-specific studies are required to understand the particular needs and stumbling blocks of VA emergency department (ED) care. The purpose of this paper is to analyze the demographics of patients served at VA EDs and compare them to the national ED population at large. Our analysis reveals that the VA population exhibits a similar set of common chief complaints to the national ED population (and in similar proportions) and yet differs from the general population in many ways. For example, the VA treats an older, predominantly male population, and encounters a much lower incidence of trauma. Perhaps most significantly, the incidence of psychiatric disease at the VA is more than double that of the general population (10% vs. 4%) and accounts for a significant proportion of admissions (23%). Furthermore, the overall admission percentage at the VA hospital is nearly three times that of the ED population at large (36% versus 13%). This paper provides valuable insight into the make-up of a veteran’s population and can guide staffing and resource allocation accordingly.

Impact of an Expeditor on Emergency Department Patient Throughput

Our hypothesis was that an individual whose primary role was to assist with patient throughput would decrease emergency department (ED) length of stay (LOS), elopements and ambulance diversion. The objective of this study was to measure how the use of an expeditor affected these throughput metrics.

Applying Lean: Implementation of a Rapid Triage and Treatment System

Emergency department (ED) crowding creates issues with patient satisfaction, long wait times and leaving the ED without being seen by a doctor (LWBS). Our objective was to evaluate how applying Lean principles to develop a Rapid Triage and Treatment (RTT) system affected ED metrics in our community hospital.

To determine if the effective use of Health Information Technologies (HIT) and the Electronic Medical Record (EMR) affects emergency department (ED) usage in a complicated frequently presenting patient population. 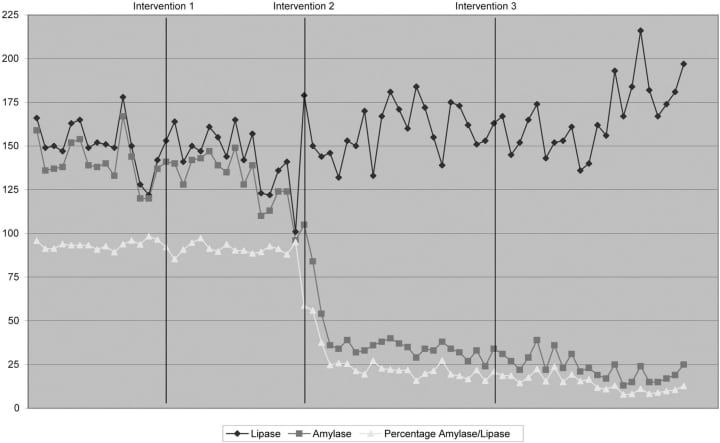 Alterations in serum biomarkers have been used to evaluate for pancreatitis in the emergency department (ED). Studies have shown lipase to be as sensitive and more specific than amylase in diagnosing pancreatitis and that amylase plus lipase does not improve accuracy over lipase alone.

Emergency department (ED) frequent users account for a large number of annual ED visits and often receive radiological studies as a part of their evaluation. We report a pilot study of a case management program for ED frequent users to reduce ED usage and radiation exposure.

Evaluate the impact of adding emergency medicine residents to a medium-size urban hospital by comparing emergency department (ED) admission rate, total census, length of stay (LOS), and proportion of patients who left without being seen (LWBS).

An electronic emergency department information system (EDIS) can monitor the progress of a patient visit, facilitate computerized physician order entry, display test results and generate an electronic medical record. Ideally, use of an EDIS will increase overall emergency department (ED) efficiency. However, in academic settings where new interns rotate through the ED monthly, the “learning curve” experienced by the new EDIS user may slow down patient care. In this study, we measured the impact of the “intern learning curve” on patient length of stay (LOS).

Two crowding metrics are often used to measure emergency department (ED) crowding: the occupancy rate and the emergency department work index (EDWIN) score. To evaluate these metrics for applicability in our community ED, we sought to measure their correlation with the number of patients who left without being seen (LWBS) and determine if either, or both, correlated with our daily LWBS rate. We hypothesized a statistically significant positive correlation between the number of patients who LWBS and both crowding metrics.

The objective of this study was to evaluate those factors, both intrinsic and extrinsic to the emergency department (ED) that influence two specific components of throughput: “door-to-doctor” time and dwell time.

The purpose of this study is to characterize the added value of the primary ICD-9 diagnosis assigned at the time of ED disposition compared to the chief complaint for patients with influenza-like illness (ILI).

Analysis of the Literature on Emergency Department Throughput

The purpose of this paper was to review and analyze all the literature concerning ED patient throughput. The secondary goal was to determine if certain factors would significantly alter patients’ ED throughput.

To study whether emergency department (ED) visits by male patients wane simultaneously with the play of scheduled professional and college sports events.

This is a prospective study of psychiatric patients presenting to the emergency department (ED) to determine the value of routine laboratory studies used to attempt to exclude concomitant medical illness.

Determine the effect that increased medical surgical (med/surg) bed occupancy has on the time interval from admission order to arrival in the bed for the patients admitted from the emergency department (ED).