Popliteal artery injuries are frequently seen with fractures, dislocations, or penetrating injuries. Concern about arterial injury and early recognition of the possibility of arterial injury is crucial for the salvage of the extremity. This article provides an outline of the diagnostic challenges related to these rare vascular injuries and emphasizes the necessity for a high level of suspicion, even in the absence of a significant penetrating injury, knee dislocation, fracture, or high-velocity trauma mechanism. The importance of a detailed vascular examination of a blunt trauma patient is emphasized.

Blunt trauma to the lower extremity has been associated with a 28% to 46% rate of injury to the popliteal artery in the form of transection, occlusion, laceration, perforation, arteriovenous fistula, or intimal injury.1–3 The popliteal artery, by virtue of its ligamentous fixation and anatomic relationships to the femur, tibial plateau, and knee joint apparatus, is uniquely susceptible to injury with blunt extremity trauma.1,4 This arterial injury is frequently associated with knee dislocation following blunt trauma, and is seen with increasing frequency.1

Popliteal artery injury is mainly associated with high energy injury, including knee dislocation and complex tibial plateau fractures or supracondylar femur fractures.5 Delay in its diagnosis is the leading cause of amputation in this limb-threatening injury. Failure to revascularize within 6–8 hours results in an unacceptably high amputation rate.3

This paper describes a rare case of blunt injury without dislocation or fracture of the knee associated with vascular injury and its delayed diagnosis resulting in amputation.

Having the first intervention done at another health center, a 38-year-old male patient engaged in mining, presented to our emergency department (ED) with an isolated crush injury of the left leg 18 hours after lateral and medial sides of his left knee was temporarily squeezed at a high speed between a tree and an operative machine. The patient’s history revealed that he presented to the hospital 5 hours after the injury as the skin did not have a laceration. Investigation of the epicrisis reports and hospital records revealed that the patient underwent Doppler ultrasonography at the sixth hour. The Doppler examination revealed the presence of a probable thrombus\in the popliteal area. An embolectomy was attempted with a Fogarty catheter, but was unsuccessful as the catheter did not pass through the distal area. The patient presented to our ED at the 18th hour of the injury. In the immediate physical examination of the patient, the left knee level showed signs of paleness, coldness, anesthesia, hemorrhagic bullae, and ecchymosis posterior to the knee (Figure 1). Tibialis posterior, dorsalis pedis, and popliteal arterial pulses were not felt. There was no motor function of the ankle and the toes. Successive tendon examination did not show any signs indicating a possible tendon injury. Radiographs of the leg did not show any bone pathology. The previously performed angiography revealed that the popliteal artery was totally occluded and there was no pathway to distal flow (Figure 2). The patient was transfused 2 units of blood for hematocrit <27%, and as his general condition deteriorated an above-knee amputation was undertaken. 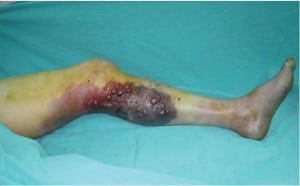 Figure 1. Ecchymosis, hemorrhagic bullae, and cyanosis posterior of the left knee and cruris. 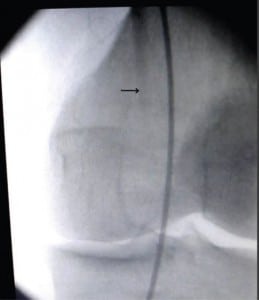 Figure 2. Angiography showing occlusion of the popliteal artery. Note the no extravasation of dye (black arrow).

Under spinal anesthesia, the patient was placed in the supine position in a sterile field. Knee tendon examinations did not reveal any pathological finding under anesthesia.

A fish-mouth incision was performed over the skin and the fascia. The bone was shortened 10 cm proximal to the femoral condyle. The popliteal artery and the vein were identified, tied, and cut. The proximal sciatic nerve was dissected, tied, and cut. The adductor magnus muscle was attached to the distal femur rudiment with ticron sutures. The amputation stump was sutured (Figure 3). Following surgery, when the amputation was investigated, 3 cm of intimal damage to the popliteal artery was detected and necrosis of the muscle, tendon, and neurovascular structures was present at this level. During the post-operational period, no complications developed in the wound and the patient was followed-up on for 2 years. 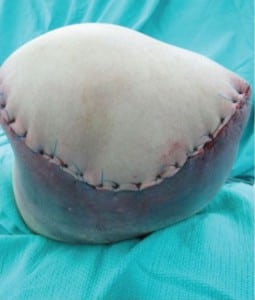 The most common cause of vascular injuries in the extremities is penetrating trauma. The second most common cause is blunt trauma, including traffic accidents, falls from a height, and crush injuries.6 The mechanism of popliteal artery injury caused by blunt trauma involves vascular occlusion secondary to thrombi of the ruptured vascular intima.1,5 Vascular injury can have devastating consequences in patients, as irreversible ischemia can occur in as short as 6 to 8 hours. Ischemia may bring about long-term morbidity or even amputation of the affected limb. Blunt popliteal artery injury has been reported to result in amputation rates of nearly 30–60%.7,8 Depending on the degree of injury to the vessel, this diagnosis may be obvious or occult.9

Abou-Sayed and Berger concluded in their review that patients with hard signs of arterial insufficiency should either undergo emergency intervention or preoperative angiography, depending on the severity of ischemia.4

The success rate of arterial repair with direct anastomosis is lower in patients with complete ischemia due to a blunt trauma or crush injury of a long vessel segment compared to those with penetrating injuries.12,13 In our case, we considered that symptoms were apparent when the arterial intima was ruptured and thrombosis or damaged wall presented with soft tissue swelling gradually. Crush injury with swollen soft tissues might obliterate the collateral ligament. We believe that all signs and symptoms increase the risk of amputation due to a crush injury.

As Boisrenault et al articulated, assessment of vascular lesions in bicruciate lesions of the knee, with or without dislocation, is initially based on clinical examination and pulse-taking. In case of ischemia, an emergency vascular operation is sought, which generally leads to surgical exploration preceded by in-theater arteriography.14 The success rate in delayed cases is low. Rapid diagnosis and surgery decrease the ischemia period and thus, the amputation rate. In their studies, Subasi et al6 stated that the existence of physical examination findings, such as bleeding from a penetrating wound, pulsatile hematoma, and the absence of distal pulses, are sufficient to establish a diagnosis of the injury. In the case of uncertain presence of distal pulses, especially in the case of blunt trauma, angiography is necessary.

Blunt knee injury producing an ischemic or pulseless extremity on presentation should alert the clinician immediately to a probable arterial injury. This should allow for prompt evaluation and repair, and further diagnostic tests are often not needed.15 The patient with palpable distal pulses after blunt knee trauma presents more of a dilemma for the clinician in terms of evaluation and rapid diagnosis of an arterial injury. The overwhelming morbidity of limb amputation associated with a delay in diagnosis or missed injury mandates that a high degree of suspicion must be maintained and a comprehensive evaluation for injury must be done. Limb loss does occur, however, which is a certain disaster for the patient and a potential medico-legal problem for the physicians who decide to rely on physical examination alone.14,15

Remarkably, knee dislocations frequently spontaneously reduce before ED presentation, but still carry the same associated risk of arterial injury. Hence, physicians must aggressively search for occult knee dislocation with concomitant vascular injury in the case of a pulse-less lower extremity immediately after a minor or major lower-extremity trauma. Physical examination of the knee for ligamentous instability can alert the physician to the possibility of an occult knee dislocation.3,11 Clinicians must remain vigilant for the possibility of a spontaneously reduced knee dislocation, and appraise the ligamentous stability of the knee and neurovascular function of the leg in patients with knee pain after trauma.3,11–16,17 In the current case, the ED evaluation, as well as a ligamentous evaluation in the operating room in all directions while under anesthesia, suggested no evidence of instability. There was no evidence of dislocation or fracture on the radiograph.

Emergency physicians should discipline themselves about the risk of concomitant vascular injury associated with knee dislocation and its forthcoming consequences of belated diagnosis. To prevent devastating results, physicians should proceed by obtaining a detailed exam and any indicated imaging, and refer the patient to a more appropriate center as necessary.7,18

This rare case report aims to present the importance of initial evaluation and stresses the significance of a detailed vascular exam in blunt knee trauma. In conclusion, the physicians should bear in mind that arterial injuries do not solely result from penetrating injuries with fractures and dislocation but may also be caused by the blunt trauma of the extremities.

48-year-old Man with Fevers, Chest Pain, and a History of Substance Abuse