Diphenhydramine toxicity commonly manifests with antimuscarinic features, including dry mucous membranes, tachycardia, urinary retention, mydriasis, tachycardia, and encephalopathy. Severe toxicity can include seizures and intraventricular conduction delay. We present here a case of a 23-year-old male presenting with recurrent seizures, hypotension and wide complex tachycardia who had worsening toxicity despite treatment with sodium bicarbonate. The patient was ultimately treated with intravenous lipid emulsion therapy that was temporally associated with improvement in the QRS duration. We also review the current literature that supports lipid use in refractory diphenhydramine toxicity.

Diphenhydramine (DPH) overdoses are relatively common and frequently present with classic anticholinergic toxicity. In severe overdoses, seizures and intraventricular conduction delay can occur due to sodium channel blockade. Sodium bicarbonate has been the mainstay for DPH-induced sodium channel blockade. Recently an animal study demonstrated intravenous lipid emulsion therapy was equivalent to sodium bicarbonate in the treatment of DPH toxicity.1 In addition, a single, confirmed case of DPH toxicity treated with intravenous lipid emulsion therapy has been reported.2

A 23-year-old male with no significant past medical history presented to the emergency department (ED) for evaluation of a witnessed ingestion of 2000-2500mg of DPH. Emergency medical services (EMS) was called approximately thirty minutes post ingestion. Upon arrival of EMS, the patient was obtunded. Ventilation was assisted by placement of a supraglotic airway. He had a witnessed, generalized tonic clonic seizure that lasted approximately thirty seconds, prompting the administration of 5mg of intravenous midazolam. His pre-hospital glucose was 122mg/dL.

Upon arrival in the ED, he was normothermic and had a blood pressure of 73/32mmHg with a heart rate of 145 beats per minute. Notable findings on his exam included pupils that were 6mm and sluggish bilaterally. He was unresponsive to painful stimuli and had no gag reflex and absent corneal reflexes but preserved occulo-cephalic reflex. He had normal muscle tone without pathologic plantar reflexes. His skin was dry.

His initial electrocardiogram (ECG, Figure 1) demonstrated sinus tachycardia with evidence of intraventricular conduction delay (QRS width of 172 msec,) along with a prolonged corrected QT interval (QTc of 577 msec). A venous blood gas revealed a pH of 6.83 with a pCO2 of 57mmHg. Serum chemistries were notable for the following: sodium 144 mmol/L, bicarbonate 10mmol/L, and chloride 111mmol/L (anion gap 19). A venous lactic acid was >20 mmol/L. His serum salicylate and acetaminophen concentrations were non-detectable. A urine drug screen was negative for cocaine or amphetamines, and a serum DPH level ultimately returned at 4100ng/mL (therapeutic range 50-100ng/mL). 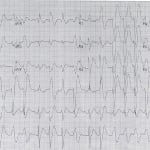 Figure 1. Initial electrocardiography on arrival of patient with probable diphenhydramine toxicity. Of note, the patient had significant intraventricular conduction delay. 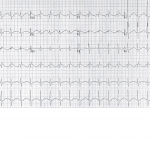 Figure 2. Electrocardiography following the second bolus of ILE. There is significant narrowing of the QRS complex.
ILE, intravenous lipid emulsion

Initially the patient underwent synchronized cardioversion twice for a hemodynamically unstable wide complex tachycardia. In addition, during the initial resuscitation the patient received 500mEq of sodium bicarbonate along with 4 liters 0.9% normal saline, 2g of magnesium sulfate, 10cc of 10% calcium gluconate, and was started on a bicarbonate infusion.

Following the 500mEq sodium bicarbonate, an arterial blood gas revealed a pH of 7.44 with pCO2 of 45mmHg, PO2 of 334mmHg, and a bicarbonate of 32mmol/L. The sodium was 149mmol/L, potassium was 2.9mmol/L, and the lactic acid was improving to 13.8mmol/L. Because the ECG revealed continued intraventricular conduction delay (QRS 140msec), he was given additional 100mEq of sodium bicarbonate without effect. Despite this intervention, however, the patient began to have increased ventricular ectopy. He subsequently received 1.5cc/kg of 20% intravenous lipid emulsion without significant change in hemodynamics or QRS width. Approximately twenty minutes later, a second bolus of 1.5cc/kg of 20% lipid emulsion was administered. Approximately five minutes after the bolus, there was an abrupt discontinuation of the wide complex tachycardia, which narrowed to a sinus rhythm with a rate of 115 beats per minute and a QRS width of 106msec (Figure 2).

The patient’s girlfriend arrived and confirmed the history of an ingestion of DPH. The patient was admitted to the intensive care unit. He was successfully extubated on hospital day 3. He had developed an elevated lipase without concurrent symptoms of pancreatitis. He was evaluated by psychiatry, and ultimately discharged from the acute-care setting.

Diphenhydramine is a widely available over-the-counter medication commonly used as a nocturnal sleep aid and a cold/allergy medication due to its anti-histaminergic and anti-cholinergic effects. While commonly thought of as an antagonist of the H1 receptors, it is more accurately considered an inverse agonist since it induces a conformational change in the receptor and stabilizes the inactive form of the receptor.3,4

Despite the antimuscarinic properties of DPH, the use of phyostigmine was contraindicated because of both the history of the seizure, as well as the intraventricular conduction delay. Similar to all drug-induced sodium channel blockade, the intraventricular conduction delay associated with DPH overdose should be treated with intravenous sodium bicarbonate.10,11 This patient had received 500 mEq of sodium bicarbonate and had documented hypokalemia. Additional bicarbonate was administered, and increased ectopy occurred, prompting concern that additional sodium bicarbonate might induce further hypokalemia and thus more ectopy. Consequently, the decision was made to administer intravenous lipid emulsion therapy.

Intravenous lipid emulsion (ILE) therapy for DPH has only rarely been described. Varney and colleagues performed an animal study in which DPH toxicity was created in 24 swine.1 Twelve were randomized to receive 7ml/kg bolus of ILE followed by a continuous infusion of 0.25ml/kg/min or 2mEq/kg of sodium bicarbonate plus an equal volume of normal saline. No significant difference was observed between ILE and sodium bicarbonate with regards to cardiac output, systemic vascular resistance, or QRS intervals. It should be noted that the patient in this report received much more sodium bicarbonate but less ILE compared with the doses administered in Varney’s study. It is not clear if the dose discrepancy accounted for beneficial effects seen in this patient, but not in their study.

Two published abstracts describe ILE use for a reported DPH ingestion. Jolliff and colleagues published a case of a 42-year-old female who presented in cardiac arrest after ingesting acetaminophen/DPH tablets (estimated 1250-2500mg DPH).16 The patient was hypoglyocemic (glucose 28mg/dL) and received multiple standard medications, including epinephrine and atropine. The patient received 50 mEq of sodium bicarbonate without effect and ultimately ILE was administered with transient return of spontaneous circulation, although the patient ultimately died. No confirmatory testing was reported. A second case of DPH toxicity treated with ILE was published by Schwarz in which a 30-year-old female was found altered after a presumed overdose. She was tachycardic and appeared anticholinergic.2 She developed status epilepticus, hypotension, and wide complex tachycardia resistant to cardioversion and amiodarone, followed by cardiac arrest which responded to epinephrine, lidocaine, and 200mEq of sodium bicarbonate. She was hypotensive requiring norepinephrine infusions. She received ILE followed by improved hemodynamics.

The use of ILE has been increasing. While its exact mechanism of action has yet to be determined, one of the prevailing theories involves increasing the lipid concentration intravascularly, with a subsequent shift of lipophilic drugs from the periphery into the vascular compartment.17 This theory, often referred to as the lipid sink theory, explains the apparent improvement in clinical toxicity from a variety of lipophilic drugs following the administration of ILE. However, its use is not without side effects, which include laboratory interference, pancreatitis, and possibly acute respiratory distress syndrome (ARDS).18

This case has several potential limitations. While the history of isolated DPH ingestion was obtained, and the serum DPH level is consistent with overdose, it is possible other sodium channel blocking agents were not detected, and contributed to the wide complex tachycardia. However, the girlfriend’s history of DPH ingestion, along with an empty pill bottle of DPH and the elevated level, makes this less likely. There was a temporal improvement in the intraventricular conduction delay after ILE; this improvement can only be considered to be temporally associated, and causality cannot be determined. Other interventions were being administered to this patient as well. However, the magnesium had been completed almost thirty minutes prior to the first dose of ILE, and no additional sodium bicarbonate was given immediately before or after the ILE. Thus, it is unlikely that either the bicarbonate or the magnesium were the cause of the reduction in the QRS duration.