A 63-year-old female presented to the emergency department with complaints of her “heart beating out of my chest,” palpitations, and shortness of breath. She was three months postoperative a #23 Edwards Sapien Transapical Aortic Valve Replacement (TAVR). On exam she was surprisingly comfortable in appearance with an easily visible pulsatile mass on her left anterior chest.

A computed tomography revealed a large, high density collection extending from the apex of the left ventricle through the left anterior fifth-sixth intercostal space into the left anterior chest wall (Figure). The pseudoaneurysm measured approximately 9.7cm by 6.5cm. The heart appeared mildly enlarged and a percutaneously placed aortic valve was noted. There was atherosclerotic calcification in the coronary arteries and thoracic aorta. No pleural or pericardial effusion was present. A healed medial sternotomy and a sternal plate were also noted.

Reports of false or pseudo aneurysms as complications of TAVR are rare, and only a handful ranging from two weeks to five months postoperatively have been reported.1-4 Surgical repair is necessary. 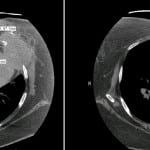