Documentation and billing for laceration repair involves a description of wound length. We designed this study to test the hypothesis that emergency department (ED) personnel can accurately estimate wound lengths without the aid of a measuring device.

This was a single-center prospective observational study performed in an academic ED. Seven wounds of varying lengths were simulated by creating lacerations on purchased pigs’ ears and feet. We asked healthcare providers, defined as nurses and physicians working in the ED, to estimate the length of each wound by visual inspection. Length estimates were given in centimeters (cm) and inches. Estimated lengths were considered correct if the estimate was within 0.5 cm or 0.2 inches of the actual length. We calculated the differences between estimated and actual laceration lengths for each laceration and compared the accuracy of physicians to nurses using an unpaired t-test.

Thirty-two physicians (nine faculty and 23 residents) and 16 nurses participated. All subjects tended to overestimate in cm and inches. Physicians were able to estimate laceration length within 0.5 cm 36% of the time and within 0.2 inches 29% of the time. Physicians were more accurate at estimating wound lengths than nurses in both cm and inches. Both physicians and nurses were more accurate at estimating shorter lengths (<5.0 cm) than longer (>5.0 cm).

ED personnel are often unable to accurately estimate wound length in either cm or inches and tend to overestimate laceration lengths when based solely on visual inspection.

Approximately 8.2% of emergency department (ED) visits in the United States are for lacerations, resulting in more than 90 million ED visits for lacerations annually.1 One of the descriptive factors included in the documentation and used for billing is the wound length, which is often estimated rather than measured. Despite this common practice, there is very little published research into wound length estimation.2-4 One previous study looked at estimation of wound length based on two-dimensional line drawings.2 The current study examines the ability of medical personnel to estimate the lengths of simulated lacerations using real tissue. This study was designed to test the hypothesis that ED personnel can accurately estimate wound lengths without the aid of a measuring device. We compared the accuracy of wound length estimations in inches versus centimeters and also compared accuracy across different groups of health care professionals.

This prospective observational study was carried out at a single-center academic ED affiliated with a Level I Trauma Center. The local institutional review committee approved the study.

Seven wounds of varying lengths were simulated by creating lacerations on pigs’ ears and feet obtained from a local grocery store. Theatrical blood was applied to each wound to better simulate a real laceration, but the blood did not obscure the edges of any of the wounds. Two independent observers measured the lacerations prior to the study and determined the actual lengths by averaging these two measurements if any discrepancy was noted. The actual lacerations created ranged from 1.4 – 9.5cm (1.4, 2.5, 3.5, 5.2, 6.0, 7.1, 9.5cm). Healthcare providers, defined as nurses and physicians working in the ED, were asked to participate in the study. Participants were given a survey in which they were asked their occupation, years of experience in that occupation, and their estimate of the lengths of the simulated lacerations in both inches and cm out to one decimal place. Participants were not permitted to touch the lacerations and therefore determined their estimated length on visual inspection alone. The surveys were obtained on two separate days and with two different sets of simulated lacerations.

We calculated the difference between actual length and estimated length of each laceration in both inches and cm,as well as whether estimates were an overestimation or underestimation of length.

Estimated lengths were considered correct if the estimate was within 0.5cm or 0.2 inches of the actual measured length. We placed the data in an Excel Worksheet and analysed it using the Statview Statistical Program (SAS, Inc.). Descriptive statistics are provided for wound length estimates for physicians. We compared the difference between estimated and actual wound lengths in the physician group to that of nurses using an unpaired t-test with p<0.05 indicating a significant difference.

Twenty-three resident physicians, nine attending physicians, and 16 nurses participated in the study. Physicians were only able to estimate wound length accurately as defined before the study within 0.5cm 36% of the time and within 0.2 inches 29% of the time (Figure 1 and 2). Physicians consistently overestimated laceration length with 70% of estimates being too long when using cm and 87.9% being too long when using inches. Accuracy was significantly better on lacerations less than 5cm in length, with 46% being estimated accurately within 0.5cm for these lacerations compared to 21% when the lacerations were over 5cm (p=0.002) (Figure 3). The same was true when estimating in inches; where lacerations less than 5cm in length were estimated accurately to be within 0.2 inches 36.7% of the time compared to 17.7% of the time for lacerations over 5cm (p=0.001) (Figure 4). Physician estimates of laceration length were consistently
more accurate than those provided by nurses with a mean difference in cm of -0.86 +/- 0.075 for physicians versus -2.73 +/- 0.391 for nurses (p<0.0001; 95% CI = -4.2 to -2.9) and a mean difference in inches of -0.731 for physicians versus -0.909 for nurses (p=0.032; -1.8 to -1.4). Similar to physicians, nurses also tended to overestimate in both cm and inches, as well as being more accurate at estimating lacerations of shorter lengths (<5.0cm). 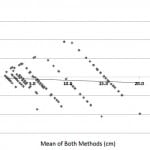 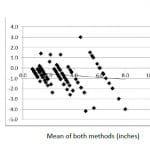 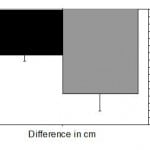 Figure 3. Physicians’ overestimation in cm based on actual wound length. 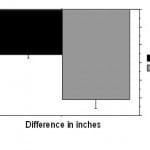 Figure 4. Physicians’ overestimation in inches based on actual wound length.

This study found that ED personnel are not able to accurately estimate wound length based on visual inspection. Accuracy was low when laceration length was estimated in cm or inches, and both ED physicians and nurses tended to overestimate. This is important to both physicians and patients as this could result in incorrect billing for repair of lacerations.4,5 These findings imply that we should be measuring our lacerations rather than estimating their length, as most of the time we overestimate.

The study was limited in that there were fairly small numbers of participants. As with any study, it is difficult to get participation; however, when conducting research with perishable items this becomes even more difficult. Multiple sets were obtained on two different days as the model used was perishable. In addition, it was difficult to exactly replicate the same lacerations on two separate days. This could be viewed as a weakness, but as is the case in the ED, no two wounds are exactly the same. A final limitation of this research is that it was based on
visual inspection alone. Medical providers may more accurately estimate wound length using techniques that are not purely visual, such as estimating based on finger widths or on number of sutures placed. The subjects were not asked the frequency with which they routinely used these other measuring cues.

ED personnel are often unable to accurately estimate wound length in either cm or inches and tend to overestimate laceration lengths when based solely on visual inspection.