A 54-year-old woman presented to the emergency department with sudden onset severe headache, nausea and vomiting upon waking that morning. On examination, she was alert and oriented, with a mild right facial droop and a right upper extremity pronator drift. A non-contrast computed tomography (CT) of the head revealed diffuse subarachnoid blood, with a prominent triangular focus projecting into the left Sylvian fissure (Figure). 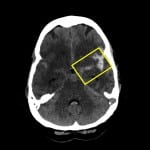 Patients with aneurysmal subarachnoid hemorrhage often present with acute headache and evidence of blood in the basilar cisterns on non-contrast CT.1 When aneurysms of the middle cerebral artery rupture, blood may pool in the area around the insular cortex and ipsilateral Sylvian cistern. The resulting hemorrhage takes on the appearance of an arrow pointing towards the side of the lesion, also known as the middle cerebral artery (MCA) arrow sign.2 Following non-contrast CT, the patient underwent cerebral angiography, which did indeed demonstrate an aneurysm at the distal M1 segment at the origin of the left anterior temporal branch. The patient subsequently underwent craniotomy and successful clipping of her aneurysm. She had normal post-operative neurologic function.