From the Heart: Interatrial Septal Aneurysm Identified on Bedside Ultrasound

A 61 year-old man presented to the Emergency Department for one day of nonspecific chest pain. Bedside echocardiogram performed by the emergency physician revealed normal systolic cardiac function but also showed a large ( > 10mm) bicornuate interatrial septal aneurysm (IASA) projecting into the right atrium (Figure 1, Video 1). There was no evidence of intraatrial thrombus. A formal echocardiogram performed later that day confirmed the diagnosis and also detected a patent foramen ovale (PFO) with a left-to-right shunt that reversed with Valsalva maneuver.

Given the increasing use of point-of-care echocardiography in the emergency department, clinicians should learn to recognize common cardiac malformations such as IASA, a congenital lesion with a prevalence between 2–10%.1 While familiar to cardiologists, the presence of an IASA may surprise the emergency physician, as few if any case reports have appeared in the emergency medicine literature. The basic differential diagnosis to consider for IASA should include thrombus, intracardiac tumor, and Chiari network (a web-like embryonic remnant in the right atrium).2

Though usually benign, IASAs have been associated with cryptogenic stroke in younger patients (< 55 years).3,4 They are thought to facilitate thrombus formation via stasis and provocation of atrial arrhythmias. IASAs are also highly associated with PFO, and the combination of the two lesions may increase stroke risk in a synergistic fashion.5,6 Anticoagulation is typically initiated as secondary prevention in patients with a history of stroke or as primary prophylaxis in patients with a visualized atrial thrombus.7–9 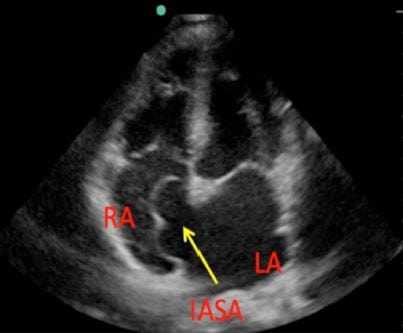 5 Wahl A, Krumsdorf U, Meier B Transcatheter treatment of atrial septal aneurysm associated with patent foramen ovale for prevention of recurrent paradoxical embolism in high-risk patients. J Am Coll Cardiol. 2005; 45:377-380

Abdominal Computed Tomography with a Twist: The ‘Whirl Sign’ for Mesenteric Volvulus