Radiology performed a transvaginal ultrasound, which was negative for intrauterine or ectopic pregnancy. Obstetric consultants were uncertain if the structure seen at bedside represented an ectopic (Image). Radiology believed that this structure, which appeared initially to be an extra-uterine yolk sac, was instead a daughter cyst. The patient was well appearing and hemodynamically stable. She was discharged with ectopic precautions and a repeat 48-hour quantitative hcg, which ultimately trended to 0. 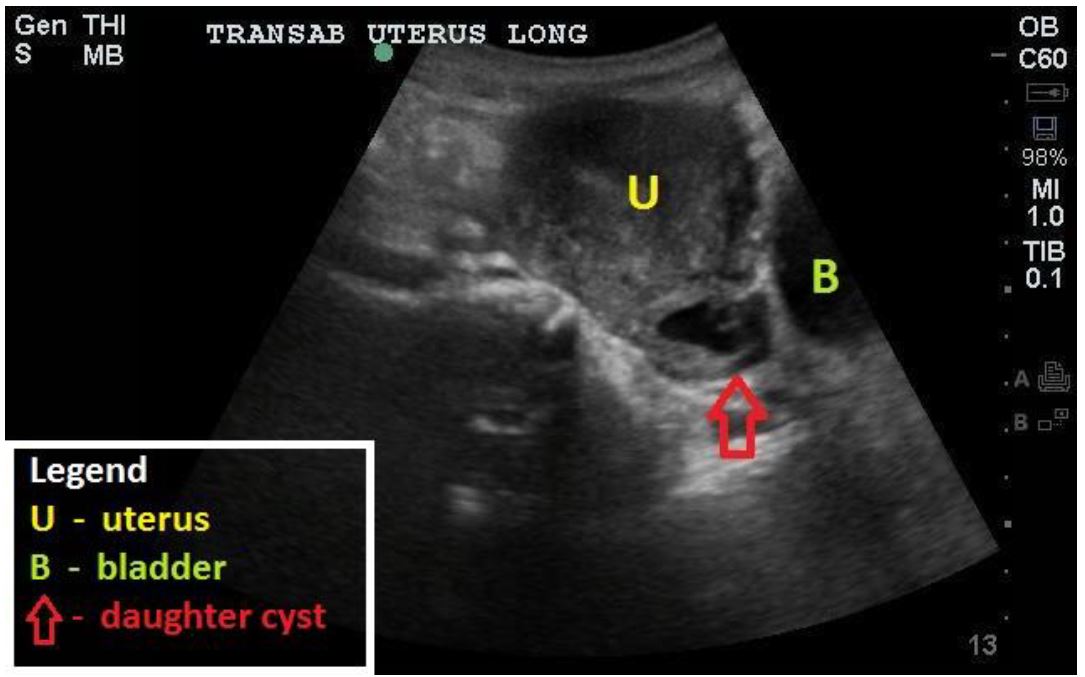 The daughter cyst sign indicates an uncomplicated ovarian cyst.1 It is a peripherally based simple cyst within a larger simple cyst.2 On pathology, it represents a stimulated ovarian follicle.2 This sonographic finding must be differentiated from an ectopic pregnancy in any woman with the potential to become pregnant.1 Previously documented cases in the literature

are limited to case reports involving pediatric females with McCune –Albright Syndrome and precocious puberty, as well as fetuses with incidental cysts mimicking ectopic pregnancy.1,2 Differentiation can be made with a quantitative hcg, which is negative in the case of the daughter cyst. Differentiation is also made sonographically with a “ring of fire” sign on the structure’s periphery, indicative of increased color Doppler flow to an ectopic pregnancy, whereas a true daughter cyst has no increased flow.1 In the case of our patient, she had a down-trending hcg due to recent administration of Plan B for unwanted pregnancy, and an incidentally noted daughter cyst that was initially concerning for an ovarian pregnancy.

Conflicts of Interest: By the CPC-EM article submission agreement, all authors are required to disclose all affiliations, funding sources and financial or management relationships that could be perceived as potential sources of bias. The views expressed in this article are those of the author and do not necessarily reflect the official policy or position of the Department of the Navy, Department of Defense or the Unites States Government.

Postmortem Sperm Retrieval in the Emergency Department: A Case Report and Review of Available Guidelines