A trapdoor fracture is a rare condition defined as a minimally displaced fracture of the orbital floor that has spontaneously reduced to its original position incarcerating an extraocular muscle.1 Clinicians have described the trapdoor fracture as a “white-eyed blowout” because of a paucity of physical examination abnormalities.2 Further complicating diagnosis, the injury may be radiographically occult on orbital computed tomography (CT).3 Trapdoor fractures are important for the emergency physician to identify because urgent surgical repair is recommended to reduce morbidity.

A 26-year-old man presented with binocular vertical diplopia after an assault. He denied loss of consciousness, headache, or vomiting. Physical examination revealed a Glasgow Coma Scale of 15, normal visual acuity and pupils, mild periorbital ecchymosis, and restricted right ocular motion in temporal downward gaze. There was no injection of the sclera, bony step-off, enophthalmos, or proptosis. Head and orbital CT were reported as negative for injury. A maxillary mucosal retention cyst was incidentally noted on CT (Images 1 and 2). 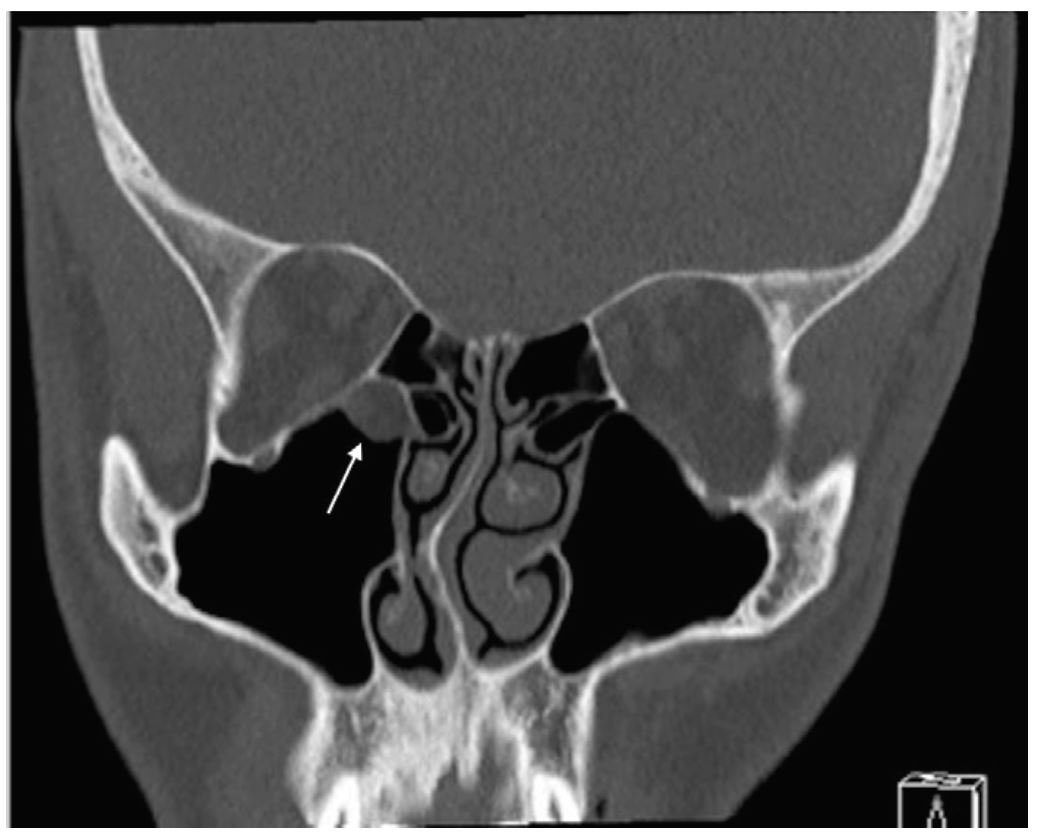 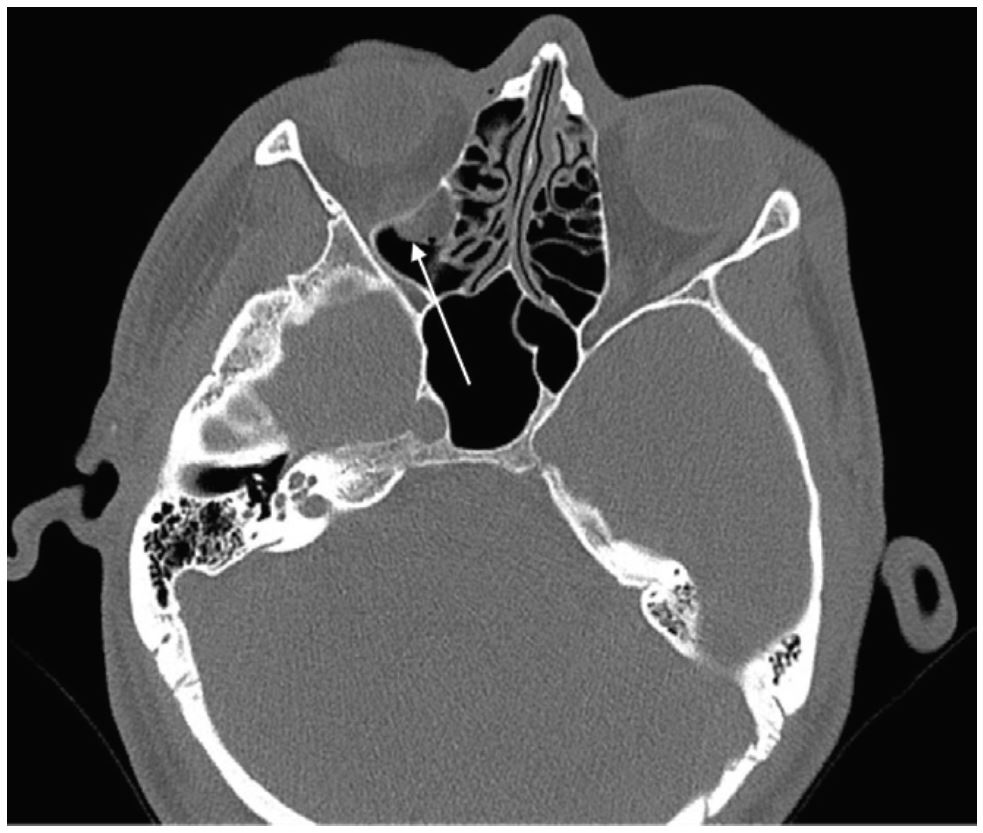 Ophthalmology was consulted and performed forced duction testing, which confirmed gaze restriction. The patient was taken to the operating room where a trapdoor fracture with entrapment of the inferior rectus muscle was diagnosed and surgically repaired. Retrospective review of the CT revealed that the soft tissue density misdiagnosed as a maxillary sinus cyst displayed radiodensity characteristics consistent with herniation of orbital fat and entrapped muscle fibers (Images 3 and 4). 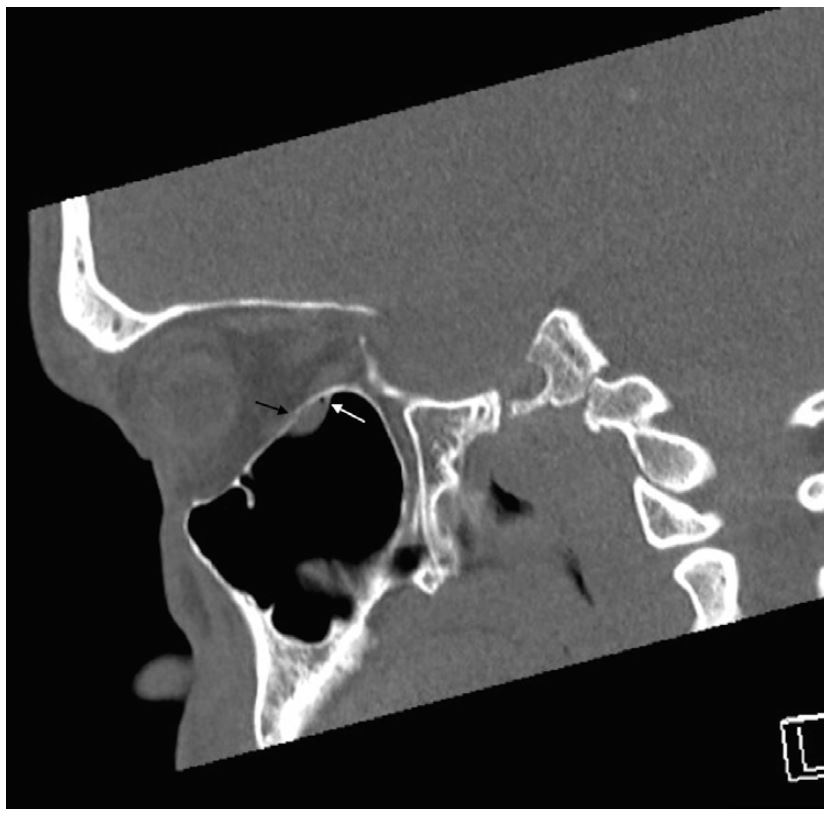 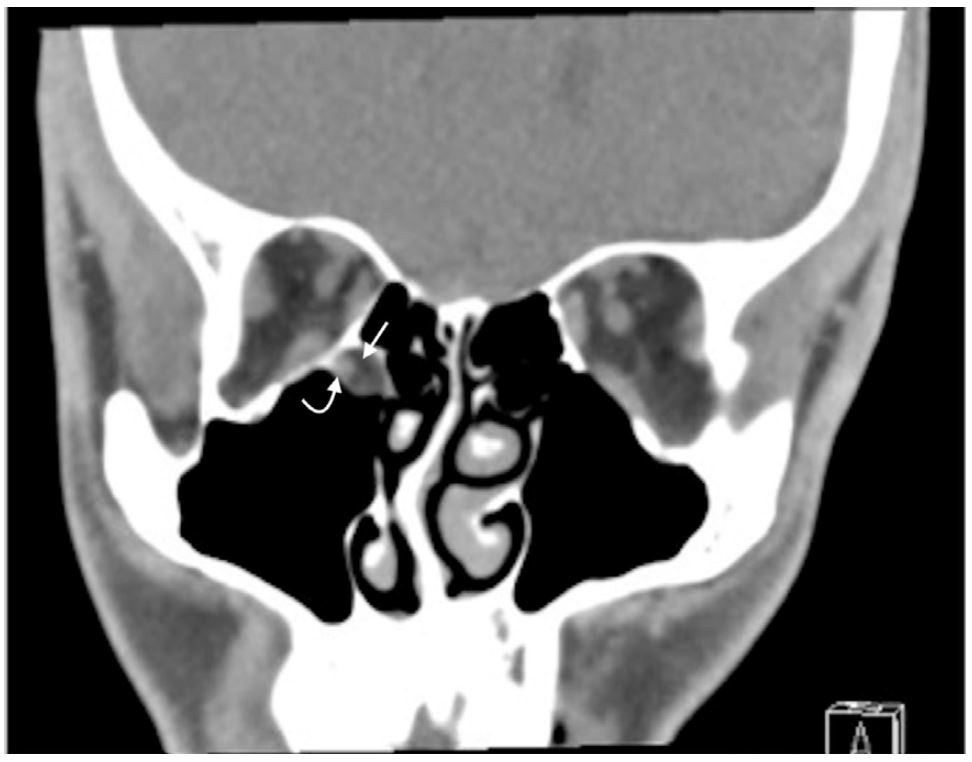 Because of their relative bony elasticity, trapdoor fractures are reported much more frequently in children, whereas adults tend to present with readily apparent comminuted fracture patterns.4 However, more recent literature suggests this injury is not exclusive to pediatric patients and can occur in young adults.5-7 Trapdoor fractures may be missed unless extraocular muscles are tested through the full range of motion and close attention is paid to the location of the orbital soft tissues on CT.3 The emergency physician must consider this diagnosis in younger patients with orbital trauma and abnormal ocular motility, even with a non-diagnostic CT, because operative intervention within 24 hours is associated with improved outcomes.8 Reported complications of delayed surgical repair include residual gaze restriction and diplopia secondary to ischemia of the extraocular muscle.9

Conflicts of Interest: By the CPC-EM article submission agreement, all authors are required to disclose all affiliations, funding sources and financial or management relationships that could be perceived as potential sources of bias. The opinions or assertions contained herein are the private views of the authors and are not to be construed as official or as reflecting the views of the Department of the Army or the Department of Defense.