Vaginal bleeding in early pregnancy is a common emergency department complaint. Point-of-care ultrasound is a useful tool to evaluate for intrauterine ectopic pregnancy. Emergency physicians performing these studies need to be cognizant of artifacts produced by ultrasound technology, as they can lead to misdiagnosis. We present two cases where mirror-image artifacts initially led to a concern for heterotopic pregnancies but were excluded on further imaging.

Vaginal bleeding and abdominal cramping are very common complaints in pregnant patients presenting to the emergency department (ED). Ectopic pregnancies make up 1.5–2% of all pregnancies.1 However, the prevalence of ectopic pregnancy among women who present to the ED in the first trimester with pain or vaginal bleeding approaches 16%.2 Although a large majority (97%) of these ectopic pregnancies tend to be in the fallopian tube,3 a small percentage have more obscure locations, making their diagnosis more challenging. Additionally, hemorrhage from ectopic pregnancy is the leading cause of pregnancy-related maternal death in the first trimester and accounts for 4–10% of all pregnancy-related deaths.3,4

Over the last 10–15 years, diagnostic ultrasound (US) modalities have incrementally improved. This technological advancement, coupled with the increased awareness of ectopic pregnancies among emergency physicians (EP), has caused a drastic increase in the incidence of this condition. It has led to earlier diagnosis and a decreased mortality rate. Between 1980 and 2007, 876 deaths were attributed to ectopic pregnancy. The ectopic pregnancy maternal mortality ratio declined by 57% between 1980 to 1984 and 2003 to 2007, from 1.15 to 0.50 deaths per 100,000 live births.5

A 25-year-old G4P0A3 female presented to the ED with lower abdominal pain and vaginal bleeding for three days. The patient was eight weeks gestation by dates and had not seen her obstetrician for pregnancy testing or confirmatory ultrasound. She denied any methods of assisted reproduction and had three previous spontaneous abortions. She had no other past medical history and took no medications or illicit drugs. Her abdominal pain was constant, non-radiating, and had no exacerbating or alleviating factors. She complained of associated nausea without vomiting, lightheadedness or dizziness. She denied trauma.

The patient’s vital signs on arrival were within normal limits. Her urine HCG was found to be positive. Physical examination revealed a young female without pallor in a mild amount of distress from pain. Pelvic examination demonstrated no tenderness or lesions, the cervical os was closed and there was no bleeding at the time of the examination. Her hemoglobin and hematocrit were 14 g/dL and 39.6% respectively. Serum HCG was found to be 36,940 mIU/ml. The blood type was O positive. She subsequently underwent point-of-care (POC) transabdominal sonography, which yielded inconclusive images. POC transvaginal sonography showed a gestational sac with yolk sac, consistent with an intrauterine pregnancy. A second gestational sac with yolk sac was also visualized posterior to the bladder. The diagnosis of heterotopic pregnancy was considered. 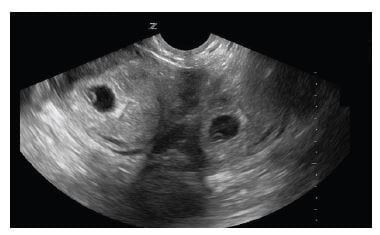 Longitudinal transvaginal ultrasound demonstrating intrauterine pregnancy on the left and the mirror-image artifact on the right of the image.

A 32-year-old G1P0 female about seven weeks gestational age by dates, presented to the ED with sharp left upper quadrant and periumbilical abdominal pain for two weeks duration. Past medical history was significant for gastritis, diverticulitis and herpes simplex virus infection. Her only medication was valacyclovir. The pain was intermittent and associated with nausea and vomiting. There were no exacerbating or alleviating factors. She denied lightheadedness, dizziness or vaginal discharge. She had seen her obstetrician earlier that morning, where she had a transabdominal ultrasound that did not visualize an intrauterine pregnancy. As a result, the patient was sent to the ED to be evaluated for ectopic pregnancy.

In the ED, she was well appearing and in a mild amount of distress. Her vital signs were normal. She continued to complain of left upper quadrant and periumbilical abdominal pain. Physical examination demonstrated a diffusely tender abdomen with the focus of pain in the left upper quadrant, without rebound or guarding. Pelvic examination yielded left adnexal tenderness with a closed cervical os. The rest of her physical examination was unremarkable. Her urine HCG was positive and she was given metoclopramide for her nausea with some relief.

Her laboratory results yielded a hemoglobin of 13 g/dL and hematocrit of 36.2%. Her serum B-HCG was 92,246 mIU/mL. Her urinalysis was normal. A focused POC transvaginal US was performed by an EP. It showed a single intrauterine pregnancy with heart rate of 151 beats per minute. However, a second gestational sac with yolk sac was seen adjacent to the uterus. The diagnosis of heterotopic pregnancy was again considered. 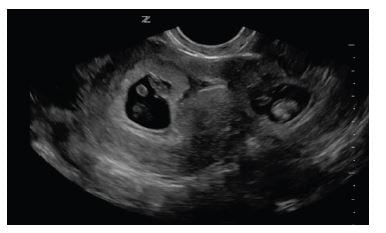 Longitudinal transvaginal ultrasound image yielding intrauterine pregnancy on the left and mirror-image artifact on the right.

On further imaging with POC US of both patients, the second gestational sac would disappear when imaged from differing positions. Considering these findings, a mirror-image phenomenon, a previously described sonographic artifact, was suspected.7

US artifacts are created by the machine’s interpretation of returning echoes but do not correspond to the actual anatomy of the patient. These artifacts are often misleading and result in misdiagnosis.7 They may originate from within the patient, an external source, or as a result of attenuation, refraction, or operator error.

Mirroring is when two identical images appear on both sides of a strong reflector. US assumes that sound is traveling in a straight line, and the depth of the reflector is proportional to the time it takes for the US beam to reach and return to the reflector.8 However, when the US beam hits a strong reflector and changes direction, the timing is not an accurate measure of the depth. As a result, duplication of objects may occur.

We believe the mirror image artifacts above were due primarily to an over-distended bladder. When the bladder is over distended the uterus is pushed up into the abdomen and lies along the psoas muscle. As described by Kremkau,9 the psoas muscle thereby acts as a reflective surface causing the mirror artifact.

Mirror image artifact is commonly seen in the liver leading to duplication of hepatic structures caused when the diaphragm acts as a strong reflector.10 Mirror image artifacts have also been described in transcranial doppler ultrasonography11,12 and cardiac imaging.13 As with all artifacts, changing the transducer orientation or patient positioning causes the mirror-image artifact to resolve.

To our knowledge, few cases of mirror-image artifact during transvaginal sonography have been reported. Sonographers and EPs must be cognizant of this artifact to avoid a false positive misdiagnosis of heterotopic pregnancy.

A Desquamating Skin Rash in a Pediatric Patient

Reversal of Dabigatran with Idarucizumab in Acute Subarachnoid Hemorrhage