The Segway® self-balancing personal transporter has been used as a means of transport for sightseeing tourists, military, police and emergency medical personnel. Only recently have reports been published about serious injuries that have been sustained while operating this device. This case describes a 67-year-old male who sustained an oblique fracture of the shaft of the femur while using the Segway® for transportation around his community. We also present a review of the literature.

In 2001, Dean Kamen developed a self-balancing, zero emissions personal transportation vehicle, known as the Segway® Personal Transporter (PT).1 The Segway’s® top speed is 12.5mph and was deemed safe for operation on urban pedestrian areas by the Centre for Electric Vehicle Experimentation in Quebec in 2006.1,2 However, several reports have been published that showed serious injuries to the “gliders” who operate these devices.3-6 This report adds to the growing literature of serious injury associated with the Segway® Personal Transporter.

A 67-year-old male presented to the emergency department with right leg pain after a fall from his Segway®. The patient reported that he used the personal transporter as his main means of transportation around the community and that evening had several alcoholic drinks and attempted to drive home. En route, he subsequently fell from the Segway® and injured his right leg. Past medical history was significant for diabetes and coronary artery disease.

Physical exam revealed a temperature of 36.6, pulse of 72 beats per minute, respirations of 14 and a blood pressure of 176/94mmHg. The patient’s Glasgow coma scale was 15 and he did not appear to have an alcohol smell on his breath. The only outward signs of trauma were located on his right lower extremity. A gross deformity was noted over the mid thigh with the entire lower extremity held in flexion and external rotation. Peripheral pulses were present in the extremity and no parasthesia was noted.

Radiograph of the right femur demonstrated an oblique fracture of the proximal shaft of the femur with severe displacement and angulation (Figure). Alcohol level was 0.024% and the remainder of the trauma studies were negative. The patient was subsequently admitted to the trauma service and underwent operative fixation the next day. He was discharged to a rehab facility five days post injury.

Figure
Oblique fracture of the proximal shaft of the femur with severe displacement and angulation. 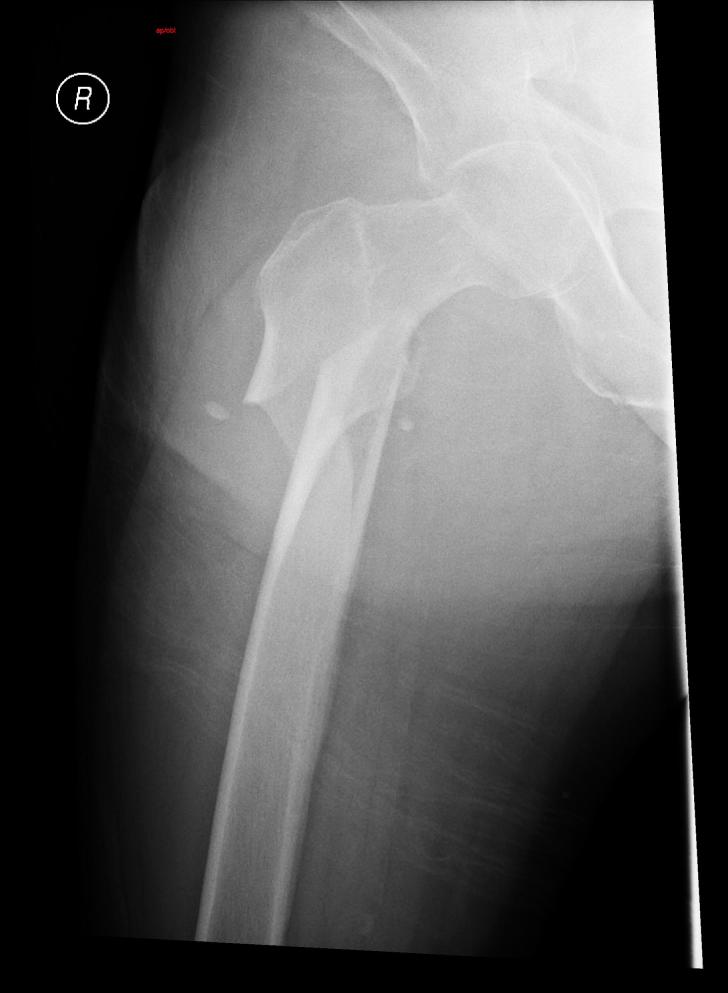 When compared to published data from case reports and case series, none of the NEISS match the published literature. Most likely, the scarcity of literature is related to the under-reporting of the true number of accidents while using personal transporters. This is evidenced by the lack of an International Classification of Diseases 10 code as well as only a handful of reported cases.

After a review of Medline, we found four separate publications that noted significant injuries in relation to the Segway® Personal Transporter (Table 1). Of those reviewed, 16 patients required hospital admission due to significant traumatic injuries and seven were placed in an intensive care setting. Further examination showed that much like our patient, 81% of patients had a fracture with 38% occurring in the lower extremity. Although fractures are common, this classically differs from skateboard and scooter injuries in which the majority occur in the upper extremity.

Table 2Compiled data from the National Electronic Injury Surveillance System on all Segway® injuries from 2009 through 2013. (n=33).

No deaths caused by Segway® use could be found in the published medical literature or within the NEISS over the time period selected. Ironically, however, a subsequent owner of the Segway® company perished after his personal transporter rolled off a 30-foot cliff and into the water in the United Kingdom.8

Based upon a literature review, injuries from the Segway® Personal Transporter are likely under-reported but those that are reported are significant in nature. Emergency physicians and the Consumer Product Safety Commission should continue to monitor the number of injuries that present in the United States, and further studies regarding the personal transporter’s safety should be undertaken.

Conflicts of Interest: By the WestJEM article submission agreement, all authors are required to disclose all affiliations, funding sources and financial or management relationships that could be perceived as potential sources of bias. The authors disclosed none. Authors have no relation with the manufacturer of Segway.