Ultrasound-Guided Diagnosis and Aspiration of Subdeltoid Abscess from Heroin Injection

A 49-year-old man presented to the emergency department (ED) with shoulder pain after intramuscular injection of heroin into his right deltoid muscle. Point-of-care (POC) ultrasound identified a subdeltoid abscess, and ultrasound-guided aspiration of the fluid collection was performed. The patient was admitted and improved on antibiotics and made a complete recovery. POC ultrasound and ultrasound-guided aspiration can assist in the diagnosis and treatment of deep musculoskeletal abscesses. [West J Emerg Med. 2014;15(7):–819-821.]

Point-of-care (POC) ultrasound is commonly used in the emergency department (ED) to evaluate for subcutaneous abscesses. Studies have shown that ultrasound is superior to clinical exam in detecting drainable superficial fluid collections in soft tissue infections.1-5 In one study, ultrasound was found to change the management in nearly half of ED patients with cellulitis and a low clinical suspicion for abscess.1 Superficial abscesses are located in the skin or subcutaneous tissue, while deep musculoskeletal abscesses are located deep to, or within the muscle. Although the role of ultrasound in superficial soft tissue infections is well established, the evidence supporting the use of POC ultrasound to detect deep musculoskeletal abscesses is limited to case reports.6,7

A 49-year-old right-handed man with a history of injection drug use presented to the emergency department (ED) with two days of right shoulder pain. Approximately four days prior to his visit, he injected heroin into his right deltoid muscle, inserting the needle completely to its hub. He reported mild pain at rest, but severe pain with minimal movement of his right shoulder; he denied weakness or numbness of the right upper extremity. He had no previous shoulder injuries or surgeries, no allergies, and was not taking any medications. On review of systems, he denied fever, but reported subjective chills.

The patient’s vital signs were: oral temperature 99.4°F, pulse 76 beats/minute, blood pressure 128/78mm Hg, respiratory rate 20 breaths/minute, and oxygen saturation of 100% on room air. Observation of the right upper extremity revealed subtle swelling over the anterior aspect of his right shoulder (Figure). His anterior and lateral deltoid were tender to palpation, but there was no warmth, induration, erythema, or fluctuance. Both active and passive range of motion of his right shoulder were limited by pain, most significantly with abduction. A neurovascular examination of his arm was normal and his arm compartments were soft. The remainder of his physical examination was normal. 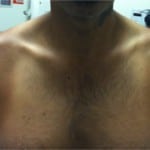 Figure. Subtle swelling over the anterior aspect of the patient’s right shoulder.

Anterior-posterior, oblique, and lateral radiographs of the right shoulder revealed no dislocation, fracture, gas or other evidence of abscess. Laboratory studies were notable for a white blood cell count of 12.6×103/µL and a C-reactive protein level of 108mg/L.

POC ultrasound of the patient’s right shoulder revealed a 2x3cm fluid collection deep to the right deltoid with surrounding inflammatory changes, but no evidence of a joint effusion or fluid- filled bursa. Using real-time ultrasound guidance, the provider inserted an 18-gauge needle into the fluid collection and aspirated approximately 3mL of purulent material (Video).

Given the evidence of an abscess deep to the deltoid muscle, orthopedic surgery was consulted. In the ED, the orthopedic surgeon made a small incision and drainage at the site of the previous aspiration (without ultrasound guidance), which did not produce further purulent material. The wound was irrigated with normal saline and betadine. The patient was admitted to the hospital and received intravenous vancomycin, with a plan for a more extensive incision and surgical washout in the operating room.

The following day, as the patient was being prepared for surgery, he left against medical advice. He was prescribed oral trimethoprim/sulfamethoxazole and was told to return to the ED for a wound check in 1-2 days.

The following day, the patient returned to the ED and stated he had been taking the oral trimethoprim/sulfamethoxazole as directed. He denied fevers, chills, or purulent drainage from the wound, but noted improvement in his right shoulder pain with increased range of motion of the right shoulder. The wound culture sent from the initial aspiration grew oxacillin-sensitive Staphylococcus aureus. An orthopedic surgeon was again consulted, and the radiology department performed a shoulder ultrasound, revealing inflammatory changes but no discrete fluid collection.

Given the patient’s clinical improvement and the absence of fluid on the ultrasound, orthopedic surgery felt that the initial ultrasound-guided aspiration of the deep-space abscess had likely decompressed the abscess sufficiently to allow non-operative treatment. The patient was discharged with instructions to continue the complete course of oral trimethoprim/sulfamethoxazole. He was later seen in primary care clinic and was reported to have made a full recovery.

There is a growing body of evidence to support the use of POC ultrasound to aid in the diagnosis of superficial soft-tissue infections in the ED.1-5 The role of POC ultrasound to evaluate for abscesses deep to or within the muscle has only been described in case reports, and has not been studied more formally.6-8 Typically deep musculoskeletal abscesses are more occult in presentation, include a much broader differential diagnosis (including septic joint and pyomyositis), and often require more extensive imaging with computed tomography (CT) or magnetic resonance imaging. POC ultrasound may be helpful in identifying the presence of deep musculoskeletal abscesses, as illustrated in this case of a subdeltoid abscess.

Point-of-care Ultrasound Detection of Cataract in a Patient with Vision Loss: A Case Report