The provider-in-triage (PIT) model has been shown to improve ED throughput, but it is unclear how these improvements are affected by boarding. We sought to assess the effects of boarding on ED throughput and whether implementation of a PIT model mitigated those effects.

The objective of this study was to investigate patient LOS in the mid- and low-acuity zones of an academic emergency department (ED) with and without medical scribes.

Despite the growing number of freestanding emergency departments (FSED) in the United States (US), FSED definitions differ across major US data sources of healthcare facilities and use. We compare these sources and propose a universal definition of FSED (and its two major types) to improve communications regarding these facilities and their patients.

“Breaking” the Emergency Department: Does the Culture of Emergency Medicine Present a Barrier to Self-Care?

Our goal was to critically examine emergency physician’s (EP) beliefs about taking breaks for self-care on shift. Our operational definition of a break for self-care included time not engaging in direct patient care, eating, drinking, using the bathroom, or leaving a clinical area for a mental break

Pediatric emergency department (PED) volume is often constrained by the number of available treatment rooms. In many PEDs patients occupy treatment rooms while awaiting test results or imaging, thereby delaying care for patients who arrive after them.

The ability to accurately identify which patients are more likely to revisit the ED could allow EDs and health systems to develop more focused interventions, but efforts to reduce revisits have not yet found success. Whether patients with a high number of ED visits are at increased risk of a return visit remains underexplored.

We assessed the impact of SurgeCon, an ED patient-management protocol, on total patient visits, patients who left without being seen (LWBS), length of stay for departed patients (LOSDep), and physician initial assessment time (PIA) in a rural community hospital ED.

We implemented a system that electronically alerts ED providers when test results are available for review via a smartphone- and smartwatch-push notification. We hypothesized this would reduce the time from result to clinical decision-making.

The percentage of patients who leave before treatment completion (LBTC) is an important marker of department efficiency. Our study aimed to assess the impact of an ED phlebotomist, dedicated to obtaining blood specimen collection on waiting patients, on LBTC rates.

Machine Learning in Relation to Emergency Medicine Clinical and Operational Scenarios: An Overview

We cover two powerful tools from health informatics for EM clinicians and researchers by describing the previous successes and challenges and conclude with their implications to emergency care.

Transition of Care from the Emergency Department to the Outpatient Setting: A Mixed-Methods Analysis

The goal of this study was to characterize current practices in the transition of care between the emergency department and primary care setting, with an emphasis on the use of the electronic medical record (EMR).

A Novel Approach to Addressing an Unintended Consequence of Direct to Room: The Delay of Initial Vital Signs

The concept of “direct to room” (DTR) and “immediate bedding” has been described in the literature as a mechanism to improve front-end, emergency department (ED) processing. The process allows for an expedited clinician-patient encounter. An unintended consequence of DTR was a time delay in obtaining the initial set of vital signs upon patient arrival.

Patient progress, the movement of patients through a hospital system from admission to discharge, is a foundational component of operational effectiveness in healthcare institutions. Optimal patient progress is a key to delivering safe, high-quality and high-value clinical care. The Baystate Patient Progress Initiative (BPPI), a cross-disciplinary, multifaceted quality and process improvement project, was launched on March 1, 2014, with the primary goal of optimizing patient progress for adult patients.

Emergency department observation units (EDOUs) are a valuable alternative to inpatient admissions for ED patients needing extended care. However, while the use of advanced imaging is becoming more common in the ED, there are no studies characterizing the use of magnetic resonance imaging (MRI) examinations in the EDOU.

The Economics of an Admissions Holding Unit

With increasing attention to the actual cost of delivering care, return-on-investment calculations take on new significance. Boarded patients in the emergency department (ED) are harmful to clinical care and have significant financial opportunity costs. We hypothesize that investment in an admissions holding unit for admitted ED patients not only captures opportunity cost but also significantly lowers direct cost of care.

Given the nationwide increase in emergency department (ED) visits it is of paramount importance for hospitals to find efficient ways to manage patient flow.

Our goal was to determine if the hemolysis among blood samples obtained in an emergency department and then sent to the laboratory in a pneumatic tube system was different from those in samples that were hand-carried.

Emergency department length of stay (ED LOS) is currently used in Australasia as a quality measure. In our ED, Maori, the indigenous people of New Zealand, have a shorter ED LOS than European patients. This is despite Maori having poorer health outcomes overall. This study sought to determine drivers of LOS in our provincial New Zealand ED, particularly looking at ethnicity as a determining factor.

In 2007, the Centers for Medicaid and Medicare Services (CMS) created a novel payment program to
create incentives for physician’s to focus on quality of care measures and report quality performance
for the first time. Initially termed “The Physician Voluntary Reporting Program,” various Congressional
actions, including the Tax Relief and Health Care Act of 2006 (TRHCA) and Medicare Improvements
for Patients and Providers Act of 2008 (MIPPA) further strengthened and ensconced this program,
eventually leading to the quality program termed today as the Physician Quality Reporting System
(PQRS). As a result of passage of the Affordable Care Act of 2010, the PQRS program has expanded
to include both the “traditional PQRS” reporting program and the newer “Value Modifier” program
(VM). For the first time, these programs were designed to include pay-for-performance incentives for
all physicians providing care to Medicare beneficiaries and to measure the cost of care. The recent
passage of the Medicare Access and Children’s Health Insurance Program (CHIP) Reauthorization Act
in March of 2015 includes changes to these payment programs that will have an even more profound
impact on emergency care providers. We describe the implications of these important federal policy
changes for emergency physicians. 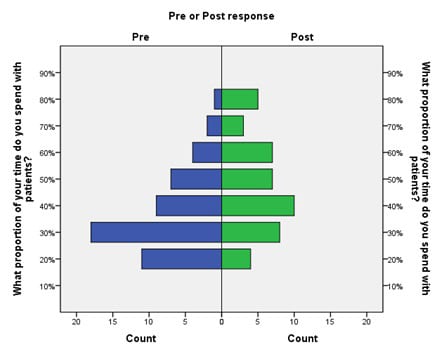 Introduction: Physicians dedicate substantial time to documentation. Scribes are sometimes used
to improve efficiency by performing documentation tasks, although their impacts have not been
prospectively evaluated. Our objective was to assess a scribe program’s impact on emergency
department (ED) throughput, physician time utilization, and job satisfaction in a large academic
emergency medicine practice.
Methods: We evaluated the intervention using pre- and post-intervention surveys and administrative
data. All site physicians were included. Pre- and post-intervention data were collected in fourmonth
periods one year apart. Primary outcomes included changes in monthly average ED length
of stay (LOS), provider-specific average relative value units (RVUs) per hour (raw and normalized
to volume), self-reported estimates of time spent teaching, self-reported estimates of time spent
documenting, and job satisfaction. We analyzed data using descriptive statistics and appropriate
tests for paired pre-post differences in continuous, categorical, and ranked variables.
Results: Pre- and post-survey response rates were 76.1% and 69.0%, respectively. Most responded
positively to the intervention, although 9.5% reported negative impressions. There was a 36%
reduction (25%-50%; p<0.01) in time spent documenting and a 30% increase (11%-46%, p<0.01) in
time spent in direct patient contact. No statistically significant changes were seen in job satisfaction
or perception of time spent teaching. ED volume increased by 88 patients per day (32-146, p=0.04)
pre- to post- and LOS was unchanged; rates of patients leaving against medical advice dropped,
and rates of patients leaving without being seen increased. RVUs per hour increased 5.5% and
per patient 5.3%; both were statistically significant. No statistically significant changes were seen
in patients seen per hour. There was moderate correlation between changes in ED volume and
changes in productivity metrics.
Conclusion: Scribes were well received in our practice. Documentation time was substantially
reduced and redirected primarily to patient care. Despite an ED volume increase, LOS was maintained,
with fewer patients leaving against medical advice but more leaving without being seen. RVUs per hour
and per patient both increased.