Ultrasound-guided nerve blocks (UGNB) are increasingly used in emergency care. The hand-on-syringe (HS) needle technique is ideally suited to the emergency department setting because it allows a single operator to perform the block without assistance. The HS technique is assumed to provide less exact needle control than the alternative two-operator hand-on-needle (HN) technique; however this assumption has never been directly tested. The primary objective of this study was to compare accuracy of needle targeting under ultrasound guidance by emergency medicine (EM) residents using HN and HS techniques on a standardized gelatinous simulation model.

This prospective, randomized study evaluated task performance. We compared needle targeting accuracy using the HN and HS techniques. Each participant performed a set of structured needling maneuvers (both simple and difficult) on a standardized partial-task simulator. We evaluated time to task completion, needle visualization during advancement, and accuracy of needle tip at targeting. Resident technique preference was assessed using a post-task survey.

Pain is a frequent complaint in the emergency department (ED).1,2 Ultrasound-guided nerve blocks (UGNB) are a potentially effective means to improve pain management in the ED.3–6 There is increasing interest in the use of UGNBs for a wide variety of ED conditions including pain control for common injuries such as hip fractures and anesthesia for invasive procedures such as shoulder reductions and abscess incision and drainage. The bulk of existing literature on education and technique for UGNBs has been conducted by anesthesiologists and refers to peri-operative applications.7–11 However, the application of UGNBs in emergency medicine (EM) requires a distinct skill set that has to date not been extensively studied.

A, Hand-on-needle technique has the provider holding the needle hub in a pencil-like fashion while resting their hand on the body surface. B, Hand-on-syringe technique has the operator hold the syringe rather than the needle, enabling them to aspirate and inject local anesthetic without the use of an assistant.

. The HN technique has traditionally been assumed to be more accurate. However, this technique requires a second operator to inject the anesthetic and also results in the primary operator losing the tactile feedback of resistance to injection. Loss of tactile feedback could potentially make it more difficult to identify a possible intraneural needle tip placement and high-pressure injection with a subsequent increased risk of peripheral nerve injury.12,13 In contrast, the HS technique requires only a single operator to maneuver the needle while also injecting the anesthetic, obviating the need for additional personnel and allowing the operator to maintain tactile feedback throughout the procedure. The single-operator method and ability to maintain tactile feedback make the HS technique advantageous in the ED setting. Additionally, the assumption that a two-operator HN technique confers more accuracy has, to our knowledge, never been investigated.

Our goal was to compare the HS and HN needle technique using a low fidelity, low cost partial-task simulator. Our hypothesis was that among EM residents, there would be no difference in performance between the two ultrasound (US) guided needle techniques.

This was a prospective, randomized trial evaluating task performance on a simulated UGNB model comparing HN and HS techniques. The local institutional review committee reviewed and approved the study.

EM residents in their first to fourth years of clinical training were enrolled in the needle task study after providing written consent.

Study participants performed a set of structured needling tasks on a standardized UGNB partial-task simulator that has been described in previous research.14 Extra-firm tofu (10 by 8 by 4 cm) provided appropriate US visualization and firmness for minimal translational movement on needle advancement. Wooden dowels were inserted through the tofu to correspond with a modeled nerve and a modeled vessel. Residents used a linear 12–5MHz transducer (Philips HD11XE, Andover, MA) with appropriate gain and depth set by one of the study authors. Each resident used a 21-gauge needle for the HN technique and a 21-gauge needle attached to a 10 cc control syringe for the HS technique. When the participant reported having reached the appropriate target, the needle task was defined as completed. These maneuvers were designed to replicate clinical scenarios relevant to ED application of UGNBs. 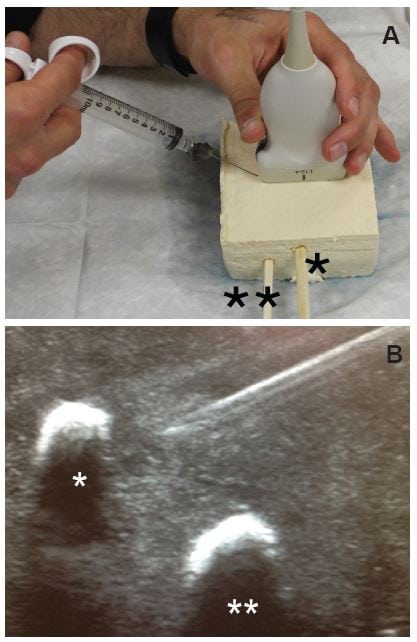 A, Simple phantom model made of extra-firm tofu (10 by 8 by 4cm) with two wooden dowels inserted in parallel fashion to simulate nerve (*) and adjacent vessel (**). B, Ultrasound image of simple model with modeled nerve (*) and vessel (**) with inplane needle view using a linear 12–5MHz transducer with appropriate gain and depth set by one of the study authors. 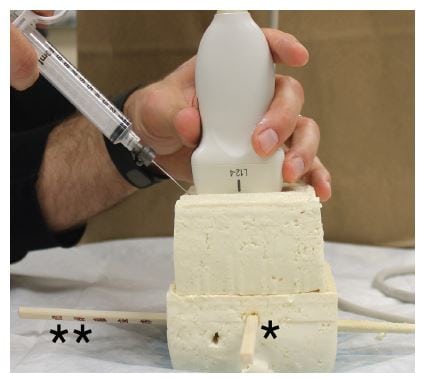 Difficult phantom model with hand-on-syringe approach. The simulated phantom model employed two sections of extra-firm tofu (10 by 8 by 4cm). Two wooden dowels were inserted through the tofu in perpendicular orientation to reflect a modeled nerve (*) and vessel (**). The modeled vessel was deeper and adjacent to the modeled nerve.

Before completion of the study, we collected the following demographics: post-graduate year, gender, age, number of UGNBs performed, number of US-guided procedures performed, confidence in US, and confidence in UGNBs. A study author recorded parameters of task performance and needle control at the time of each task; these included missed appropriate modeled vessel, reached close proximity to appropriate modeled nerve (<5mm), advanced needle only when visualized, and time-to-task completion. Residents completed a post-task survey that included needle technique preference, confidence in UGNBs, and skills learned from tutorial.

We stratified primary outcomes by HN technique and HS technique in both the simple and difficult model. Variables were not recorded during the initial practice period with the simple model. For categorical variables, we calculated p-values by chi square analysis and Fisher exact test if expected cell counts were less than five. For continuous variables, p-values were calculated using the pooled variance t-test. We completed analyses using Statistical Analysis Software version 9.2 (Cary, North Carolina) and Microsoft Excel (Redmond, WA).

*The hand-on-needle technique has the operator holding the needle hub in a pencil-like fashion while resting their hand on the body surface. The hand-on-syringe technique has the operator hold the syringe rather than the needle, enabling them to aspirate and inject local anesthetic without the use of an assistant.  †Residents performed needling tasks on two simulated phantom models representing a simple and difficult ultrasound-guided regional anesthesia scenario. Residents were randomized on which needle technique to perform first and then second on the simple model. The needle technique order was then reversed for the difficult model.  ‡Categorical variables: Chi square and Fisher exact test for expected cell counts less than 5. Continuous variables: pooled variance independent t-test

Our results suggest that the single-operator HS technique provides equivalent needle control when compared to the two-operator HN technique among EM residents. The HS technique has two advantages in the busy ED setting. First, one provider can complete the HS technique while the HN technique requires two providers (one to control the needle, the other to inject anesthesia). Second, delegating aspiration and injection to an assistant removes the immediate tactile feedback on injection pressures that a single-operator technique affords. This is a known concern in the anesthesiology literature, and in fact there are reports of novel hand and syringe positions that would permit a single-operator technique with a standard HN apparatus.15 These hand positions seem somewhat complex for novice practitioners. The HS technique would be much more appealing in the ED environment, using a commonly available control syringe to retain tactile feedback.

Our low cost, low fidelity model could be used in most domestic or international ED settings with success. Any EM provider wishing to simulate UGNB would only require a physician knowledgeable in UGNBs, an appropriate US, tofu, and wooden dowels. Partial-task simulators such as the one described in our study have been described extensively in the anesthesia literature.7,8,10,11,16 Our study is the first to extend such simulation methods to the ED setting. UGNB needle skills are potentially transferrable to other US-guided procedures, such as central and peripheral intravenous lines, arthrocentesis and pericardiocentesis. As UGNBs become common practice in the ED setting, an UGNB curriculum will be essential to any EM residency program. We hope our study can foster additional innovative models and training curriculum to improve needle performance.

Our study has several limitations. The phantom model used has both a flat surface that was easily positioned for an optimal needle approach and remained immobile. In actual practice, the challenges of irregular body contours and patient movements could create circumstances that we were not able to simulate in our model. Nevertheless, the partial-task phantom model simulators such as the one described in our study have been described extensively in the anesthesiology literature and likely allowed us to evaluate performance akin to best-case scenario actual practice where the patient is adequately sedated and well positioned.8,10,11,16 Ours was a pilot study to investigate a novel question that has not been investigated previously. While statistical analysis was performed on our results including p-values, our study was not meant to detect small differences. While needle tasks were randomized, subject preference could have been dictated by order as one might expect increasing preference with increasing experience with the task. We opened study enrollment to all interested residents and there was likely some self-selection bias. However it is not directly clear how this bias would alter the generalizability of our results. Finally, the EM residents at our institution use ultrasound extensively in their training. Their comfort with US might not reflect other training sites where it is used less frequently.

For EM residents learning UGNBs, we found the HN technique was similar to the HS technique for superior needle control. The HS technique may represent an attractive alternative in emergency settings. Using a brief tutorial and a low fidelity, low cost, partial-task simulator, EM residents were able to complete both simple and difficult simulated UGNBs.