BE-SAFE: Bedside Sonography for Assessment of the Fetus in Emergencies: Educational Intervention for Late-pregnancy Obstetric Ultrasound

This is a prospective observational study evaluating an educational intervention we designed, called the BE-SAFE curriculum (BEdside Sonography for the Assessment of the Fetus in Emergencies). Subjects were a convenience sample of EP attendings (N=17) and residents (N=14). Prior to the educational intervention, participants completed a self-assessment survey on their confidence regarding OBUS, and took a pre-test to assess their baseline knowledge of OBUS. They then completed a 3-hour training session consisting of didactic and hands-on education in OBUS. After training, each subject’s time and accuracy of performance of FHR, EGA, and fetal lie was recorded. Post-intervention knowledge tests and confidence surveys were administered. Results were compared with non-parametric t-tests.

After a focused POC OBUS training intervention, the BE-SAFE educational intervention, EPs can accurately and rapidly use ultrasound to determine FHR, fetal lie, and estimate gestational age in mid-late pregnancy.

The rapid evaluation of fetal heart rate (FHR), EGA and fetal lie in third trimester pregnancy is critically important to ensure the well being of both mother and fetus after traumatic injury or during emergent delivery. Historical dating and physical examination of fundal height for gestational age and fetal lie are prone to error.4,5 Point of care US offers the advantage of being able provide the necessary fetal measurements quickly and accurately at the bedside.

Shah et al previously investigated EP-performed OBUS for fetal dating in the third trimester. While EPs are accurate in determining the gestational age in late pregnancy, little is known about the training requirements needed for EPs to achieve competency.6 To our knowledge, this is the first study to examine the effect of a brief training intervention on the performance by EPs of third trimester OBUS for gestational age, fetal heart rate and fetal lie.

We conducted a prospective, observational study of EP accuracy and confidence to perform late pregnancy US after an educational intervention in 2012. Study subjects (EPs) were blinded to the true gestational age and fetal heart rate of the live models used in the training. The study waived informed consent from the university’s institutional review board.

Subjects were a convenience sample of core faculty attending physicians (17) and residents (N=14) from a new academic emergency medicine program in a large urban area in the northwestern United States. 14 of the total 18 residents in the program were present at the didactic session and participated in our study. Resident physicians were grouped into “experienced” residents who had completed a 2 week emergency ultrasound rotation, and “inexperienced” interns who had not yet completed their initial ultrasound rotation. There was also a range of experience with OBUS among the attending faculty, including some who had minimal or no prior training in OBUS, either in residency or subsequently. The study was conducted within a simulation center used for interdisciplinary training.

Prior to the educational initiative, participating subjects took the obstetric ultrasound quiz at www.emsono.com/acep online and submitted scores to the research assistant. After the BE-SAFE educational initiative, subjects repeated the exam with different questions online using the same website, and submitted their scores for comparison. Before and after the training session, participants also completed an online self-assessment survey of their attitudes regarding, and comfort level with, obstetric ultrasound. They were asked to rate their level of comfort on a scale from 1 (not at all confident) to 6 (very confident) for assessing each of the following using OBUS: FHR, fetal head position (HP), and estimation of gestational age (EGA). Pre- and post- test scores and survey results were compared with descriptive statistics and non-parametric t-tests.

During the hands-on training session after completion of the proctored sessions, each subject was assessed at a final test station where time and accuracy for determining fetal heart rate, BPD, and fetal lie was recorded. Subjects presented individually to the test station and were blind to the fetal lie and true gestational age of a live pregnant model at 27 weeks gestation. Time measures were recorded from probe placement on skin to exact moment of identification of cardiac activity, completion of fetal heart rate measurement using M-mode, and again from probe placement to identification of fetal head and presentation, and to measurement of the biparietal diameter. The research assistant also recorded whether the subject needed verbal cues to complete the required measurements.

At the testing and training stations, 3.5MHz curved abdominal transducers and Sonosite Edge US machines (Sonosite Inc., Bothell WA) were used for measurements. M-mode was used for measurement of the fetal heart rate. B-mode imaging was used to measure the fetal biparietal diameter as per standard convention at the level of the falx cerebri and thalamus in an axial plane with calipers placed at the outer aspect of the skull in the near field and the inner aspect of the skull in the far field.

We conducted an online survey of confidence level, experience, and attitude regarding OBUS for participants both before and after the training, using the Catalyst online web survey tool (Catalyst Web Tools, Solstice Program, University of Washington IT Department, Seattle WA). We analyzed the confidence level results, as well as the pre- and post-knowledge assessment scores from www.emsono.com/acep, using both Kruskal-Wallis Analysis of Variance and Mann-Whitney U tests run using Statistica software (Statistica, StatSoft, Tulsa OK). 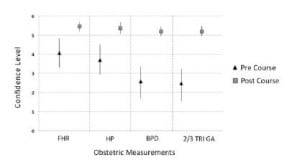 Emergencies in late pregnancy can jeopardize the health of the patient and her fetus, and much of the information needed for optimal patient care may be quickly ascertained using bedside US. Despite this, there is limited published literature regarding EP performance of point-of-care sonography in second- and third-trimester pregnancy. Shah and colleagues6 showed that EPs can accurately estimate late-term gestational age, a finding supported by our results. However, evidence-based guidelines to identify the optimal length and intensity of training in OBUS necessary for EPs to achieve competence are lacking. Our study showed that a brief training module increased EP knowledge of OBUS and improved confidence for the determination of EGA, as well as for the assessment of two additional important clinical data points: fetal lie and heart rate.

Although the utility of US for the detection of maternal injury during pregnancy has been previously demonstrated,7 most of the literature regarding the ability of EPs has been focused on first-trimester complaints. Use of emergency US in pelvic disorders tends to focus on detection of intrauterine pregnancy to rule out ectopic pregnancy. In this setting, EP-performed US has been shown to have high sensitivity and specificity.8,9

Late-term fetal dating and position assessment may be of utility in the setting of shock or trauma, where the patient in extremis may not be able to provide accurate information and the decision for aggressive intervention could be determined by the gestational age of the fetus. Fetal viability begins at a gestational age of approximately 24 weeks,10,11 often estimated by determination of fundal height. Physical diagnosis of fundal height, however, may be limited by body habitus and in the setting of trauma, by uterine rupture, making estimation of age difficult to achieve. Our training module also taught EPs to assess the fundal height by US, though the accuracy of this method was not assessed in our study and warrants future investigation.

Additionally, our study demonstrated that the entire US assessment of FHR, HP, and EGA was completed in under five minutes. When peri-mortem or crash cesarean delivery is being considered, rapid and accurate assessment of gestational age is critical for physicians facing time-sensitive decisions.

Our study has several limitations that we have identified. We note that while a range of both resident and attending physicians with varying levels of ultrasound skills participated in the study, because this is a small convenience sample of physician subjects, the results may not be generalizable to larger audiences of EPs.

In addition, this is a live simulation-based training model, and while physician subjects were largely successful in accurate and rapid ultrasound measurements in this environment, the challenges of ultrasound use in an actual ED environment may affect the performance of these ultrasound exams.

To conclude, we found that EPs can accurately and rapidly estimate gestational age, fetal heart rate and fetal lie in the second and third trimester after the brief BE-SAFE training intervention. This information is of value in the setting of shock or injury during late pregnancy, when the patient cannot communicate their gestational age or in the event of precipitous delivery.

Conflicts of Interest: By the WestJEM article submission agreement, all authors are required to disclose all affiliations, funding sources and financial or management relationships that could be perceived as potential sources of bias. The preparation of this manuscript was partially supported by W81XWH-10-2-0023 from the Department of Defense U.S. Army Medical Research and Material Command to Drs. Fernandez and Shah and 1R18HS020295 from the Agency for Healthcare Research and Quality to Dr. Fernandez. The authors disclosed no other potential source of bias.

8 Durham B, Lane B Pelvic ultrasound performed by emergency physicians for the detection of ectopic pregnancy in complicated first-trimester pregnancies. Ann Emerg Med. 1997; 29:338-47

Underutilization of the Emergency Department During the COVID-19 Pandemic