The emergency medical services (EMS) system plays a crucial role in the chain of survival for acute myocardial infarction (AMI) and stroke. While regional studies have shown underutilization of the 911 system for these time-sensitive conditions, national trends have not been studied. Our objective was to describe the national prevalence of EMS use for AMI and stroke, examine trends over a six-year period, and identify patient factors that may contribute to utilization.

Using the National Hospital Ambulatory Medical Care Survey-ED (NHAMCS) dataset from 2003-2009, we looked at patients with a discharge diagnosis of AMI or stroke who arrived to the emergency department (ED) by ambulance. We used a survey-weighted χ2 test for trend and logistic regression analysis.

In a nationally representative sample of ED visits from 20003-2009, there were no trends of increasing EMS use for AMI and stroke. Efforts to improve access to care could focus on patient groups that underutilize the EMS system for such conditions. [West J Emerg Med. 2014;15(7):744–748.]

Acute myocardial infarction (AMI) and stroke are both time-sensitive conditions with significant morbidity and mortality across the United States.1 In 2013, an American Heart Association update found the burden of cardiovascular disease (CVD) remains high throughout the U.S.1 Each year in this country an estimated 915,000 people experience a new or recurrent myocardial infarction or coronary heart disease death, and approximately 795,000 people experience a new or recurrent stroke.1 The emergency medical services (EMS) system plays a crucial role in the chain of survival for both conditions by facilitating timely access to the emergency care system through early recognition in the field, advanced notification to the receiving facility, prompt emergency department (ED) evaluation and imaging and therapeutic intervention.2-4 Therefore, national guidelines by the American Heart Association and the Centers for Disease Control and Prevention (CDC) recommend that the public  activate the 911 system upon recognition of warning signs of an AMI or stroke.1,2 While there have been several efforts to improve the use of 911 in time-sensitive conditions, regional data have not shown a significant increase in use of 911.5,6 However, national trends in use of 911 comparing utilization for AMI and stroke have not been studied before. Improved public health awareness of AMI and stroke symptoms, combined with recent focus on prehospital systems of care could lead to a higher national utilization of EMS for these time-sensitive conditions. The primary objective of this study was to describe the prevalence of EMS use by AMI and stroke patients across the U.S. Our secondary objectives were to ascertain EMS utilization trends over a six-year period and examine patient factors that may influence its use.

We analyzed data collected between 2003 and 2009, by the National Hospital Ambulatory Medical Care Survey-ED (NHAMCS), which is a nationally representative, multicenter, stratified sample of ED visits.7 This six-year period was chosen as there were changes in the data format after 2009. NHAMCS provides data on the utilization of emergency care in non-institutional general (excluding federal) and short-stay hospitals throughout the U.S. This survey is conducted by the National Center for Health Statistics, a branch of the CDC. Details of the survey methodology are available online. In brief, field investigators collect a random sample of standard patient record forms from all visits to EDs within the primary sampling units (PSUs) in a random four-week period. PSUs are randomly chosen from 1,900 county-sized population units first identified for the National Health Interview Study. These data are publicly available and therefore exempt from institutional review board approval.

We included patients with a primary diagnosis of AMI and ischemic stroke, defined by International Classification of Diseases, Ninth Revision (ICD-9) codes. The primary search parameter was ED arrival by ambulance. We used survey visit weights provided by the NHAMCS to estimate the national proportion of patients diagnosed with AMI and stroke in EMS transported patients. A survey-weighted χ2 test for trend was used to examine the statistical significance of changes in ambulance use over time for each of these conditions. Logistic regression modeling was used to determine factors independently associated with EMS use. We performed data analysis in SAS version 9.2 (Cary, NC) and Sudaan, version 10.0 (Research Triangle, NC), using the threshold of statistical significance was a 2-sided α level of 0.05.

The total study patients and characteristics associated with EMS arrival in AMI and stroke patients can be found in Table 1. We analyzed the entire age group as shown in Table 1, but focused on the 65-80 subgroup as they contributed to the highest proportion of stroke patients. In the AMI group, there were 41.2% female and 39.5% of the total patients within the 65-80 years of age category. In the stroke group, there were 56.0% female and 36.5% of total patients within the 65-80 years of age category. In this study, the actual number of patients represents the weighted N or number as part of the total population. There were 442 AMI patients (estimated number in the population was 737,397) included in the study and 220 (49.8%) presented to the ED via EMS. During this same period, 1,324 stroke patients were analyzed (estimated number in the population was 2,316,655) and 666 (50.3%) presented via EMS. The majority of patients in both groups were non-Hispanic white and listed home as their primary residence. There is a similar distribution between insurance groups for both AMI and stroke. A higher percentage of AMI and stroke patients in this sample called EMS from the South region and were found in urban areas. In terms of ED care, the most common triage time grouping for both AMI (59.2%) and stroke (44.2%) was less than 15 minutes, and the majority of patients were admitted to the hospital, indicating a high acuity. For AMI patients, variables associated with EMS arrival were race/ethnicity, nursing home residence and insurance (Table 1). Older age, nursing home residence, insurance status and geographic regions were all associated with arrival via EMS for stroke patients. 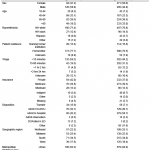 EMS usage for AMI and stroke was evaluated annually from 2003-2009 (Figure). For both of these conditions there was no significant change in 911 activated transports over the six-year time period. 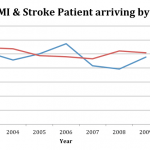 Logistic regression analysis revealed the factors independently associated with EMS use for both AMI and stroke patients combined (Table 2). Patient factors evaluated were age, race, geographic region, residence, and time. For the analysis, we used one patient factor as the reference or baseline for which the others were compared against and this is listed on the table as ‘Reference.’ The statistically significant factors were age (OR 1.21; 95% CI 1.12-1.31), non-Hispanic black race (OR 1.72; 95% CI 1.16-2.29), and nursing home residence (OR 11.50; 95% CI 6.19-21.36). These factors are bolded on Table 2. 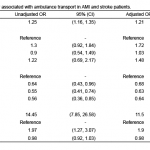 Using data from a nationally representative sample of ED visits, we found that despite national efforts to improve EMS use for time-sensitive conditions, trends have remained stable over time. Our results indicate that across the U.S., only 50% of patients with AMI and stroke present to the ED by EMS. While this number appears low, it is consistent with prior regional published studies that also show about 50% EMS utilization for time-sensitive conditions.5,8 These results indicate that warning symptoms may be going unrecognized in the community and delaying the time to diagnosis and treatment. While ongoing studies are exploring reasons for lack of 911 usage in time-sensitive conditions, future work should focus on identifying high-risk populations and targeting efforts towards non-users of EMS.9,10

While the majority of the sample using EMS for both conditions was comprised of white non-Hispanic patients, black non-Hispanics were more likely to use EMS for transport than white non-Hispanic patients. Prior studies have shown race to be a variable factor in EMS utilization for AMI and stroke.11-13 Our results could be explained by increased severity of symptoms, lack of personal vehicle access, awareness of the EMS system, or success of recent targeted public heath campaigns. In our study, we found nursing home patients are overall high users of the EMS system, and have a much higher odds of EMS use with time-sensitive conditions. This could in part be explained by the fact that healthcare providers with prior knowledge of AMI and stroke are the ones accessing the emergency care system. The odds of EMS use were highest in the Northeast when compared to other regions in our analysis. A greater proportion of urban settings with established EMS systems and therefore an increased access to care or effective public health messaging could explain this finding.

While review of the NHAMCS dataset from 2003-2009 showed no increase in EMS utilization for AMI and stroke during those six years analyzed, recent national proposals have attempted to address this challenge. In September 2011, the CDC launched the Million Hearts Campaign to prevent heart disease and stroke using a multidisciplinary approach. This six-year project attempts to prevent one million heart attacks and strokes by 2017. The campaign identifies “improving access to effective care” as an important component to the initiative.14 Future studies are needed to show if these efforts translate into increased use of the 911 system as a means of accessing care.

Our results indicate that ongoing efforts have not resulted in a national increase in EMS use for AMI and stroke. However, data have shown the importance of early detection and timely transport for these time-sensitive conditions. Therefore, understanding if efforts should be directed toward improving knowledge or facilitating translation of knowledge into calling 911 is critical. Also, whether efforts should be targeted or generalized to the community needs to be better studied. Further, similar efforts are underway for other disease processes, such as out of hospital cardiac arrest (OHCA), and it is important to learn from the successes of those targeted efforts aimed to improve cardiopulmonary resuscitation in the community.

Some limitations to our findings are that the NHAMCS database uses survey weighting to estimate national probability and may not be representative of all regions in the U.S. We recognize this is a hypothesis-generating study and it does not provide answers to why utilization of EMS continues to be low. In addition, our selection of the time period to be investigated was in part due to the change in data format of NHAMCS after 2009 and to avoid complexities in analyzing the two differently formatted datasets.

In addition to current efforts, there should be continued attempts to understand the reasons for the lack of EMS activation when time-sensitive conditions such as AMI and stroke present. Targeting efforts towards communities who underutilize EMS could be beneficial and should be considered.

More Is More: Drivers of the Increase in Emergency Medicine Residency Applications