We measured patient satisfaction using Press-Ganey surveys returned by patients that visited our ED between August 1, 2007 and March 31, 2008. We recorded all mean satisfaction scores and obtained mean ED occupancy rate, mean emergency department work index (EDWIN) score and hospital diversion status over each 8-hour shift from data archived in our electronic tracking board. Univariate and multivariate logistic regression analysis was calculated to determine the effect of ED crowding and hospital diversion status on the odds of achieving a mean satisfaction score ≥ 85, which was the patient satisfaction goal set forth by our ED administration.

Increased crowding, as measured by ED occupancy rate and EDWIN score, was significantly associated with reduced patient satisfaction. Although causative attribution was limited, our study suggested yet another negative impact resulting from ED crowding.

Emergency department (ED) crowding is a major issue facing many of the nation’s emergency departments.1–5 The etiology of crowding is believed to be multifactorial, with the following key elements contributing to its cause: a decrease in hospital capacity, an increase in closures of a significant number of EDs, an increase in ED patient volumes, a shortage in nursing staff, an increase in the complexity of patient management and the inability to transfer patients from the ED to inpatient units.4 ED crowding has been associated with adverse medical outcomes and substandard patient care, including delays in door-to-needle time for patients with acute myocardial infarction, increased death after admission and poor performance on pneumonia quality of care measures.6–11A recent meta-analysis found crowding to be associated with an increase in transport delays, ambulance diversion and patients leaving the ED without being seen.12 A recent study focusing on patients who were admitted to the ED suggested that poor ED service, as indicated by ED hallway use and prolonged boarding time, was not only associated with a decreased satisfaction in the ED, but also predicted a lower satisfaction with the entire hospitalization.13 Patient satisfaction is an important issue for EDs and has been recognized as a measure of quality of healthcare.14

The purpose of our study was to investigate the association between patient satisfaction, as measured using Press-Ganey surveys (www.pressganey.com), and ED crowding, as measured by the ED occupancy rate, emergency department work index (EDWIN) score and hospital diversion status. We hypothesized that there would be an inverse relationship between patient satisfaction and ED crowding in patients discharged directly from the ED.

We conducted a retrospective, cohort study of all patients who were discharged from the ED and completed Press-Ganey patient satisfaction surveys between August 1, 2007 and March 31, 2008. The study was performed in a large, tertiary care, suburban, teaching hospital ED. Our ED has an annual census of greater than 85,000 patients, with an average of 230 patients seen in the ED on a daily basis. This study was approved by our local institutional review committee.

Crowding was measured using the following 3 metrics: ED occupancy rate, modified EDWIN score and hospital diversion status. The ED occupancy rate was defined as the total number of patients in the ED divided by the total number of ED licensed beds.15 We determined the EDWIN score by calculating patient number and acuity, number of attending physicians on duty and total bed availability.11, 16, 17 The higher the EDWIN score the more crowded the ED. We measured patient satisfaction using the Press-Ganey survey, a commonly used measure of patient satisfaction in the ED.

Press-Ganey surveys were distributed, at random, to both adult and pediatric patients discharged from the ED over an 8-month period. Press-Ganey selects patients randomly to distribute surveys, using a read-skip methodology, as follows: The system reads the first patient record, then skips the next 7 records, then reads the next record, then skips the next 7 records. This method is continued until the maximum number of patients is reached. A maximum of 2000 patients were provided with a survey each month, which translated to approximately 40% of the patients discharged from the ED in a given month. The surveys were collected by Press-Ganey, with an average response rate of 10–12%.

Patients were instructed to complete the survey by scoring questions within the following categories: arrival, tests, nurses, doctors, family or friends, personal issues, overall assessment and personal/insurance information. Each question was scored on a 5-point Likert scale, with a score of 1 corresponding to “very poor” and a score of 5 corresponding to “very good.” Each score on the Likert scale was then converted to a mean satisfaction score (1=0, 2=25, 3= 50, 4=75, 5=100). Each patient was also asked to designate his or her time of arrival, which corresponded to one of 3 8-hour shifts: 7:00am–3:00pm, 3:00pm–11:00pm and 11:00pm–7:00am.

Our ED information system and electronic tracking board (Picis ED PulseCheck, Wakefield, Mass.) automatically calculated and provided a “modified” EDWIN score in real-time. To avoid “divide by zero” computational errors, the EDWIN score available on our electronic tracking board varied from the standard EDWIN score in the following 2 ways: 1) admitted patients were not removed from the variable ni in the numerator (standard calculation of EDWIN score excludes admitted patients from variable ni); and 2) the number of treatment bays, BT, denoted all beds available for patient care in the ED, including hallway beds (standard calculation only includes licensed treatment bays). In our study, BT was 117, rather than the 50 licensed beds for our ED. The result of these modifications was a lowering of the numerical value of our score when compared to the original description of the EDWIN score, but it still varied by a full order of magnitude between lowest and highest value. Given that we used this modified EDWIN score that involved changes to both the numerator and the denominator of the original EDWIN score, there is no proportional correlation to the original EDWIN score; therefore, it is difficult to draw conclusions about the score at which a “busy” and “crowded” ED would occur.

We calculated Spearman correlation (ρ) to determine the association between ED crowding and patient satisfaction scores (with Spearman correlation coefficients ranging from −1 to 1, with values closest to −1 indicating a strong inverse association and values closest to 1 indicating a strong positive association). We calculated univariate and multivariate logistic regression analysis to determine the effect of ED crowding and hospital diversion status on the odds of achieving a mean satisfaction score ≥ 85, which was the patient satisfaction goal set forth by our ED administration. Model parameters were specified and input as forced predictors into our model. We performed statistical analyses using SPSS version 16.0 (SPSS Inc., Chicago, IL). For all analyses, P ≤ 0.05 denoted statistical significance, with no adjustment for multiple comparisons. 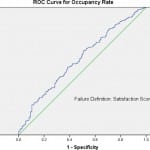 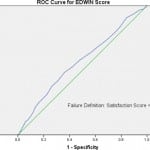 ED crowding is a phenomenon that continues to burden the healthcare system. The number of patients passing through EDs in the United States continues to increase, along with a decrease in the number of EDs available for their care.4 An increase in patient volume, with a concomitant decrease in available facilities to treat these patients, will further complicate the issue of ED crowding. This issue goes beyond a patient’s contentment with his or her visit to the ED; it has been associated with unfavorable medical outcomes and poor patient care.6–11, 19, 20 ED crowding may also impact hospital revenue and has even been shown to impact physician job satisfaction.21–23 Needless to say, ED crowding is a complex issue affecting many aspects of patient care.

Interestingly, at least 1 recent study did not find an association between ED crowding and adverse outcomes. This study measured time to percutaneous coronary intervention for patients with ST-segment elevation myocardial infarction (STEMI). As suggested in that study, higher acuity conditions, such as STEMI, may result in a diversion of resources away from other lower acuity conditions, which can lead to unfavorable outcomes overall.24

This study was non-randomized and took place at a single institution. Those individuals who returned the Press-Ganey survey may not have been representative of all patients. Furthermore, our response rate was uncertain and likely low, as is common for patient satisfaction surveys. As a result, this study might have been subject to selection bias. The scale of our EDWIN score differed from that described in the original literature, which potentially limited the generalizability of our results. Avoidance of a divide by zero error in the implementation of electronic real-time calculation of the EDWIN score resulted in a larger denominator than would have otherwise existed. As such, our EDWIN score calculation resulted in a lower value than would normally have been calculated. Despite the lower numerical value of our EDWIN score, the range of our score was wide (almost a full order of magnitude existed between the lowest and highest values), which may have served to maintain the sensitivity of the score at the expense of transferability between different sites. Nevertheless, the validity of the EDWIN score had been inconsistent in studies published since its original description.17, 25

Another consideration was that patient satisfaction survey data obtained from Press-Ganey were only available in 8-hour shift increments, which may have limited the sensitivity of our analysis. Individual patient data were not available. As such, it was plausible that greater crowding variability existed within each distinct 8-hour period.

Increased crowding, as measured by ED occupancy rate and EDWIN score, was significantly associated with reduced patient satisfaction. Although causative attribution was limited, our study suggested yet another negative impact resulting from ED crowding.

Conflicts of Interest: By the WestJEM article submission agreement, all authors are required to disclose all affiliations, funding sources, and financial or management relationships that could be perceived as potential sources of bias. The authors disclosed none.