Depression, Suicidal Ideation, and Suicidal Attempt Presenting to the Emergency Department: Differences Between These Cohorts

The World Health Organization estimates that one million people die by suicide every year. Few studies have looked at factors associated with disposition in patients with chief complaints of depression, suicidal ideation (SI) and suicidal attempts (SA) who present to the emergency department (ED). Our objective was to assess individual determinants associated with ED disposition of patients in depressed patients presenting to the ED.

The Hispanic population had higher discharge rates, but the reasons are yet to be explored. Patients with SA and SI are discharged less frequently than those with depression, regardless of insurance type or housing status.

According to the World Health Organization (WHO) approximately one million people die by suicide every year, with a global mortality rate of 16 per 100,000. In 2004 suicide was the 16th leading cause of death worldwide.1 This statistic, however, does not include additional morbidity caused by failed attempts and injuries, as well as visits to the emergency department (ED) for suicidal thoughts and ideation.

In the United States (U.S.), suicide ranks as the 11th leading cause of death and accounts for more than 33,000 deaths annually.2 In 2005 Doshi found that suicide and self-inflicted injury accounted for more than 400,000 ED visits per year from 1997–2001 (0.4% of all ED visits).3 This high burden of disease has made suicide prevention one of the goals of Healthy People 2010,4 and the U.S. Surgeon General has recognized the need for improved identification, diagnosis and treatment of suicidal ideation.5

Several studies describe specific risk factors for suicidal ideation and suicide attempt. These factors include prior attempts, feelings of worthlessness or hopelessness, and recent stressors.6–10 To date no study has looked at risk factors associated with discharge status for patients who visit the ED with complaint of depression, suicidal ideation or suicidal attempt.

Our goal was to identify characteristics of patients who are safe for discharge. The objective of this study was to identify determinants associated with discharge in ED patients presenting with suicidal attempt (SA), suicidal ideation (SI) and depression.

We retrospectively examined predictors of discharge from the ED among patients with any diagnosis of SA, SI or depression, using the National Hospital Ambulatory Medical Care Survey (NHAMCS) data for the years 2006 to 2008. Because the NHAMCS coding included codes for depression in very young children, which we believe represent confusion between respiratory depression and depression, we restricted the data to patients age 6 years and older.

The NHAMCS is a national survey completed by the Centers for Disease Control (CDC) that provides a sampling of ED and outpatient visits, excluding federal, military and VA hospitals. NHAMCS has been used in multiple studies to generate national estimates of ED visits.3,11–13

The study used only data from an existing national survey and did not require institutional review board approval.

We analyzed the data using STATA version 12.0, StataCorp, College Station, TX. We used Stata survey procedures, which take into account both clustering by survey location and data weighting, to estimate the percent of U.S. ED visits with various patient characteristics.

We used logistic regression to identify factors associated with discharge in SI, SA and depression patients. All of the variables of interest were included in a single logistic model to provide mutually adjusted estimates of the odds ratio for discharge from the ED. The logistic regression also used STATA survey procedures to adjust for clustering and weighting. 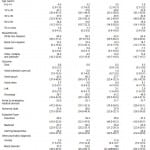 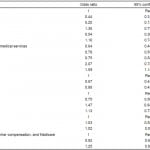 SI and SA patients had lower odds of being discharged when compared to depressed patients. This is expected, as clinical decisions in the ED tend to be cautious regardless of a patient’s level of suicidality.7 ED visits related to suicide have increased in volume over the last 2 decades.8 Nationally we are facing an increase in the number of patients visiting EDs for psychiatric reasons.9 This will undoubtedly add a strain to our existing healthcare budget. As such, admitting all patients with self-harm may be unrealistic.10 A study conducted in 2012 showed excess mortality rates in patients who arrived in the ED with suicidal chief complaints when compared to that of the general population.27 It is essential to identify high-risk patients effectively. Special caution must be taken by emergency physicians (EP) to ensure prevention of suicide-related mortality.

A recent study showed that 60% of transition from ideation to plan and attempt occur within the first year after ideation onset.19 This is an opportune time to intervene with the cohort of patients who are expressing SI. Unfortunately to this date, few studies have shown a reduction in emergency healthcare use in these patients.11, 20-25

Gairin et al10 found that patients who received psychosocial assessment prior to discharge were more readily identified as high risk, and Kapur et al11 found that a psychosocial assessment halved the risk of repetition of self-harm. Psychosocial assessment completed by case managers is a realistic and cost-effective intervention that can be done in the ED.11 ED visits for psychiatric chief complaints can be reduced if there are resources available for outpatient psychiatric services.12 Further research should investigate longitudinal healthcare index markers after discharge from the ED or inpatient setting to explore if there is a difference in mental health when patients are admitted or discharged for SI, SA and depression.

Insurance status was not a factor in determining odds of being discharged. Similarly, a 3-hospital study conducted in 2007 showed that insurance status was not related to hospitalization decisions regarding suicide-related visits.13 Yet another study showed that the uninsured were found to be least likely to be admitted for all mental disorders except suicide.28 This suggests that disposition decisions in the ED tend to be extra conservative regarding suicidal patients and favor admission, regardless of patients’ insurance status. This coincides with the ED philosophy of safeguarding against life-threatening illnesses first. On the one hand, it is refreshing to see that EPs are making disposition decisions regardless of payor type. On the other hand, our changing healthcare system may add an even greater responsibility on EPs and their ability to safely discharge the proper cohort of patients with self-harm.

Notably, being Hispanic increased the odds of being discharged from the ED, even when compared to other minorities and adjusted for other factors such as age, payor status, housing status and previous psychiatric illnesses. Many plausible explanations for our study result exist. Disparity in mental healthcare among Hispanic could be one of the reasons. Few studies found Latinos and Hispanics received depression care less than whites.14,15 Furthermore, many Spanish-speaking people in the U.S. reported they do not speak English well or at all.16 Bilingual patients are evaluated differently when interviewed in English as opposed to Spanish and that Hispanics are more frequently under-treated.17 It is possible that depression complaints might be mistaken for nervousness, tiredness or a physical ailment in Hispanics.17 Many Hispanics rely on help from their extended family and traditional healers during a mental health crisis.17 (A study in Colorado reported that Hispanic populations underreported suicidal ideation and this could be a reason for less admission in the Hispanic group.)18 Therefore, EPs should still consider other factors, such as abnormal vital signs or underlying psychiatric disease, when considering admission in this population.

While national surveys such as NHAMCS are valuable and can be helpful for large epidemiologic studies, one must recognize the problems inherent in such a system. First, to create the trends and conclusions in this paper we have made a few assumptions concerning the data: (a) the sample is representative of the target population (in our case patients presenting to the ED with SI or SA); and (b) the data are an accurate representation of the true values for each. However, as discussed in a recent Annals of Emergency Medicine Journal Club these assumptions have the potential to be incorrect.19

Other limitations of NHAMCS include errors in data collection and reporting, such as the cluster of 0–6 year-olds with “depression.” In addition to general coding errors, some errors were created by the nature of our study. For example, coding may miss unusual or severe attempts where the cause of the acute illness was not determined immediately and coding could miss suicidal ideation with other presentation.

Our study was also limited in the use of depression as a marker for suicidality. Suicidal ideation is a new code included starting in 2006 in the NHAMCS data, but we found that this was likely underutilized as there were more SAs than SIs in the data, which is counter to our experience in the ED. The National Health Interview Survey asks about a variety of mental health disorders, but does not directly ask about suicidal thoughts or behaviors. The Behavior Risk Factor Surveillance System Questionnaire is an adult survey that is completed; however, it only includes information on suicidality from 2009–2010. This will be an excellent source for future studies.

Our results show that being Hispanic has higher tendency to be discharged from ED after patient was evaluated for depression, SI, SA. Although healthcare providers should be aware of disparity in access to healthcare, cultural difference and language barriers as explanations for this possible false protective factors in this Hispanic population. Patient with SA and SI were being treated with extra precautions, which resulted in lower discharge rate which reflects emergency medicine mentality. Insurance status was not associated with disposition from ED in these patient populations. With changes in healthcare systems, the providers will need to be cautious about patient disposition either admission or discharge patients for the EDs. Further study is needed to explore whether resource availability including follow up appointment plays any role in discharge decision.

Conflicts of Interest: By the WestJEM article submission agreement, all authors are required to disclose all affiliations, funding sources and financial or management relationships that could be perceived as potential sources of bias. The authors disclosed none

10. Gairin I, House A, Owens D. Attendance at the accident and emergency department in the year before suicide: retrospective study. Br J Psychiatry. 2003;183:28-33.

29. Cedereke M, Monti K, Ojehagen A. Telephone contact with patients in the year after a suicide attempt: does it affect treatment attendance and outcome? A randomised controlled study. Eur Psychiat. 2002; 17:82-91.

32. Repper J. A review of the literature on the prevention of suicide through interventions in Accident and Emergency Departments. J Clin Nurs. 1999;8:3-12.