Self-Cannibalism: The Man Who Eats Himself

A 34-year-old male patient was brought to the emergency department from the prison with a laceration on the right leg. Physical examination revealed a well-demarcated rectangular soft tissue defect on his right thigh. The prison authorities stated that the prisoner had cut his thigh with a knife and had eaten the flesh.

A 34-year-old male patient was brought to the emergency department (ED) from the prison with a laceration on the right leg. Physical examination revealed stable vital signs and a well-demarcated rectangular 7×11 cm (7 mm thick) soft tissue defect on his right anterior thigh area. Although calm in appearance, he did not respond to physicians’ questions. The prison authorities reported that he had cut his thigh with a knife and had eaten the flesh about one hour after cutting the tissue. They also added the prisoner had done the same thing to his left arm a year ago. 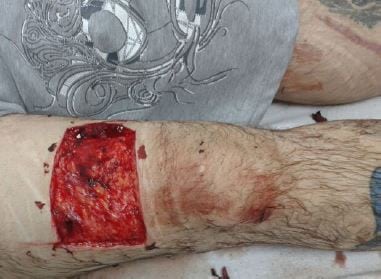 The cut in the patient’s right anterior thigh. 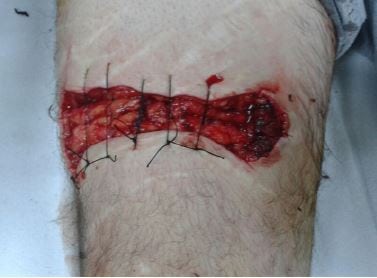 The laceration was sutured and left for secondary healing.

After administration of tetanus vaccine and 1 gr cefazoline sodium, the wound was repaired under local anesthesia, leaving the defect open for secondary healing. Psychiatric evaluation was also done in the ED. The patient was not under psychiatric care despite several occasions of self-harm behavior. Diagnosed with psychotic disorder, the patient was transferred to a closed psychiatric ward.

Self-mutilating injuries are encountered predominantly in male patients in the ED.1,2 This pattern of behavior is seen in patients with personality, acute and chronic psychotic, major affective, and gender disorders. Self-harm behavior is primarily encountered in patients with personality disorders, especially in those with borderline personalities.3 Favazza postulated that this behavioral pattern is an effort to rid oneself of depersonalization, guilt, rejection, hallucinations, sexual involvements and complex emotional states.4 Self-harm behavior represents a rescue attempt triggered under circumstances in which expression of aggression is inhibited. Our case is a typical example of this behavior, seen frequently among prisoners.3 Authors cite that sexual, physical or emotional abuse and biological causes (alcoholism, depression and anxiety disorders) are important underlying factors in the etiology of self-harm behavior, abuse being the most important.5,6 Self-cutting is the most common type of self-injurious behavior. Cutting injuries to the wrists and arms are the most frequently encountered locations due to accessibility, although a myriad of different injury locations have been recorded.7

A variety of major self-mutilation attempts have been cited in the literature. Erdur et al. reported a 27-year-old patient with schizophrenia who amputated his tongue and penis.1 Ahsaini et al. published a report of a 40-year-old man who presented in hemodynamic shock after eviscerating both testes with his fingernails.8 Michopoulos et al reported a 66-year-old man who had been mutilating his fingers for the last six years.5 This behavior started as nail biting and continued on to severe finger mutilation, resulting in loss of the terminal phalanges of all fingers in both hands. Koh and Lyeo wrote of a 20-year-old patient with schizophrenia who enucleated his own eye.9

Our patient was challenging in that he was a prisoner and not very cooperative, which hampered a thorough psychiatric evaluation. A presumptive diagnosis of psychosis was based on the patient’s indifferent attitude, limited cooperation, low-toned speech with short questions and answers, mystic delusions, auditory and sensory delusions – hearing commands and inappropriate affect. Self-harm behavior is seen primarily in patients with borderline and antisocial personality, major affective, and gender disorders and substance abuse.

The fact of being imprisoned, along with possible secondary gains such as getting away from prison for admission to hospital due to “illness,” and lighter sentencing penalties, may have led the patient to engage in such behavior. Therefore, further investigation in terms of simulation, personality disorders and substance abuse is necessary.

Self-mutilation associated with self-cannibalism is a rare condition. It can be due to a severe mental disorder such as schizophrenia. It could also be the result of a personality disorder or a malingering secondary behavior to get a lesser criminal penalty.