Simultaneous hemorrhagic and ischemic strokes have been previously reported in the literature. Typically, these occur in patients secondary to dialysis, cerebral amyloid angiopathy, or thrombotic thrombocytopenic purpura.1,2,3 However, this is the unique case of a 62-year-old Asian female who presented with a hemorrhagic stroke suspected to be secondary to refractory hypertension from intracranial large vessel atherosclerotic flow limiting stenosis, with rapid subsequent large vessel occlusion and ischemic stroke. Questions arise such as ideal blood pressure parameters for dual management, timeliness of computed tomography angiography imaging in the emergency department for detection of large vessel occlusion during intracranial hemorrhage, and subsequent selection of treatment plan in the dual-lesion patient population.

The occurrence of ischemic stroke in those with flow-limiting intracranial atherosclerotic stenosis is well documented and continues to be one of the most common causes of stroke worldwide.4,5,6 The incidence of intracranial atherosclerotic disease is known to be higher in the Asian and African-American populations.7 While cases of dual strokes with both hemorrhagic and ischemic components due to other etiology have been previously described, there is a paucity of literature in regard to intracranial hemorrhage (ICH) due to refractory secondary hypertension resulting from intracranial flow-limiting atherosclerotic occlusion. This is a case of a patient who arrived to the emergency department (ED) with a hypertensive-appearing brainstem intraparenchymal hemorrhage who was subsequently found to have severe flow-limiting intracranial stenosis that developed into ischemic cerebral infarction.

A 62-year-old, right-handed, Asian female with history of known refractory hypertension and diabetes mellitus was brought into the ED via emergency medical services (EMS) as a stroke alert soon after experiencing sudden onset of neurologic symptoms. The patient was driving with her husband from San Francisco to Miami when she experienced confusion, slurred speech, and right-sided weakness, which subsequently progressed to unresponsiveness. En route to the ED, EMS reported a blood pressure of 240/120 millimeters of mercury (mmHg) and a glucose level of 133 milligrams per deciliter (mg/dL).

Upon arrival, her Glasgow Coma Scale was seven. Her neurologic examination demonstrated right-sided hemiplegia, left-sided withdrawal to pain, a rightward gaze preference, and reactive pupils. The patient was immediately intubated in the ED for airway protection. Initial vital signs following intubation were as follows: blood pressure 270/159 mmHg; pulse 78 beats per minute; temperature 36.7 degrees Celsius; respiratory rate 18 breaths per minute (on ventilator); pulse oximetry 100% (on 100% fraction of inspired oxygen); and body mass index of 23.5 kilograms per meter squared (kg/m2) (reference range 18.5–24.9 kg/m2). The patient was started on a nicardipine infusion with a goal systolic blood pressure less than 190–200 mmHg and a propofol infusion for sedation before being taken for imaging.

Initial non-contrast computed tomography (CT) of the brain revealed an ICH that arose in the pons and extended into the fourth ventricle. Her only risk factor for developing the hemorrhagic stroke was the known refractory hypertension. The size of the hemorrhage measured 3.4 centimeters (cm) by 2.0 cm with a volume less than 30 milliliters (mL) (Image 1). An ICH score of three was given, suggesting a 72% mortality. The initial complete blood count and coagulation studies were within normal limits. Intracranial pressure-lowering management was initiated, which included the following: 3% hypertonic saline bolus; 30-degree head of bed elevation; and hyperventilation to target partial pressure of carbon dioxide of 35 mmHg (reference range 35–45 mmHg). Strict systolic blood pressure control to less than 140 mmHg was started with nicardipine infusion as part of the management for ICH. After initiating these measures, an emergent CT angiogram (CTA) was obtained to rule out aneurysm or arteriovenous malformation. 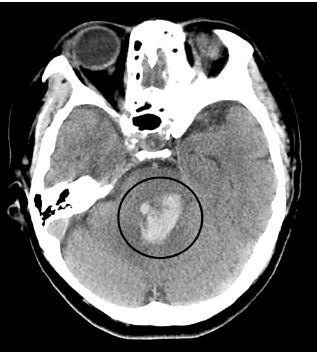 CTA showed a near occlusion of the left M1 (horizontal proximal) segment of the middle cerebral artery (MCA), which appeared to be chronic (Image 2). The patient was admitted to the intensive care unit with cerebral angiogram scheduled for the following morning to evaluate for left MCA stenosis or cryptogenic malformation. The cerebral angiogram revealed a nearly occluded left M1 MCA with surrounding stenosis involving the proximal M1, multiple M2 branch points, A2 (vertical, post communicating, infracallosal), and A3 (precallosal) anterior cerebral artery branch points consistent with severe intracranial atherosclerosis (Image 3). There was evidence of neovascularization suggesting chronicity of stenosis. Revascularization of the stenotic lesions at this time was considered extraordinarily high risk with the concurrent ICH due to the need for aspirin and clopidogrel during these procedures. 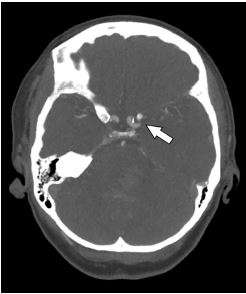 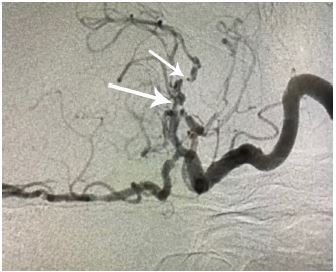 There are established guidelines for blood pressure management, imaging modalities, and definitive treatment options to manage either ischemic or hemorrhagic stroke.

This report discusses the novel presentation of a patient with simultaneous ischemic and hemorrhagic strokes secondary to hypertension from intracranial atherosclerotic stenosis.

Clarity is needed for clinical parameters and treatment options in the dual-lesion patient.

Care will be improved with better-defined management standards and other special consideration, given the unique pathophysiology in dual ischemic and hemorrhagic lesions.

On hospital day three, due to concern for developing hydrocephalus, an external ventricular drain was placed, which measured normal intracranial pressure. On hospital day five, increased lethargy was noted while the patient was off of sedative medication. A repeat non-contrast CT of the brain at this time demonstrated a new, low attenuated area involving the high posterior aspect of the left frontal lobe in a MCA watershed area (Image 4). The patient’s neurologic condition continued to decline, and her course was further complicated by aspiration pneumonia. The family ultimately elected to withdraw care, and she passed peacefully on hospital day nine. 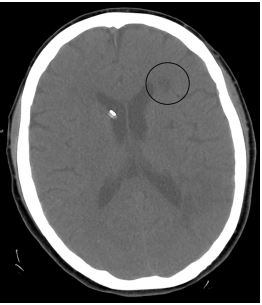 Intracranial arteries are made up of endothelium with smooth muscle cells and an extracellular matrix comprised mostly of collagen and elastin. Stroke due to intracranial atherosclerotic disease is caused by hemodynamic failure, in-situ thrombus from plaque disruption, and/or distal thromboembolism.11 Secondary hypertension due to intracranial atherosclerotic disease is a common compensatory mechanism to maintain adequate cerebral perfusion.

Previous reports have discussed the occurrence of simultaneous hemorrhagic and ischemic events in patients secondary to dialysis, cerebral amyloid angiopathy, or thrombotic thrombocytopenic purpura.1,2,3 Examples of events include expanding hemorrhagic intracranial hematoma with subsequent edema that causes compression of adjacent vessels leading to ischemic stroke. There are many other mechanisms for developing ischemic stroke, which can be attributed to embolism, thrombosis, or systemic hypoperfusion.12 In this particular patient, however, the ischemic event occurred in the contralateral side of the hemorrhage and in a watershed pattern consistent with hypoperfusion from the underlying stenotic lesion after the lowering of blood pressure to manage the ICH. The concurrent presence of cerebral edema refractory to conventional intravenous treatments may have also contributed to the hemodynamic changes resulting in ischemic stroke.

Another important point concerns the timing of CTA in the ED for patients with ICH. The common benefits of routine CTA imaging would include evaluation for aneurysm, malformations, and other intracranial vascular anomalies often seen in spontaneous hemorrhage. CTA also assists in the selection of aneurysmal treatment planning. An additional benefit of CTA in the ED during ICH would be identifying intracranial stenosis, similar to this case, which may be the underlying cause of secondary hypertension.

This is a case of intracranial hemorrhage secondary to refractory hypertension due to severe intracranial atherosclerotic stenosis. Further exploration is needed of the critical questions that arise, such as ideal blood pressure parameters for management, timeliness and routine use of CTA in the ED, and subsequent selection of treatment plan in the dual-lesion patient populations.

2. Guzzini F, Conti A, Esposito F. Simultaneous ischemic and hemorrhagic lesions of the brain detected by CT scan in a patient with thrombotic thrombocytopenic purpura. Haematologica. 1998;83(3):280.