A 44-year-old Hispanic male with a history of Wolff-Parkinson-White Syndrome (WPW) presented with chest pain and palpitations that had been constant for three hours. He denied any other complaints. He reported drinking one cup of coffee daily and stated he had used cocaine about one month earlier, but denied any recent drug use. On physical exam he was sitting comfortably with a heart rate between 230 – 250 and a blood pressure of 129/58mmHg. Cardiac monitor showed a wide-complex tachycardia. The rest of his physical exam was unremarkable. Initial electrocardiogram (ECG) revealed an irregular wide-complex tachycardia, consistent with atrial fibrillation with a rapid ventricular response. The patient was started on intravenous procainamide. He remained normotensive with no QRS prolongation. After approximately 30 minutes of infusion, a repeat ECG showed resolution of his wide-complex tachycardia. The patient was admitted and taken to the electrophysiology lab, where he underwent successful radiofrequency catheter ablation of his right posterior septal accessory pathway. No further antegrade or retrograde pre-excitation was documented afterwards.

WPW is a pre-excitation syndrome resulting from a structural abnormality of the heart in the form of an accessory pathway that conducts current along this aberrant path in a reentry mechanism which can lead to ventricular dysrhythmias. All cases of wide-complex tachycardias should be presumed to be ventricular tachycardia until proven otherwise. In the case of hemodynamic compromise, cardioversion is the treatment of choice.1,2 If the patient is stable, medical management may be considered. Procainamide is the initial drug of choice.1,2 Care must be taken to monitor for potential side effects such as hypotension and QRS prolongation. 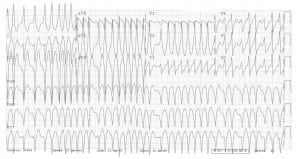 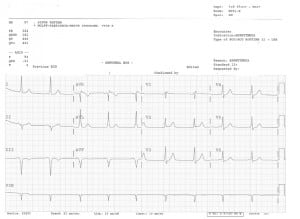 Conflicts of Interest: By the WestJEM article submission agreement, all authors are required to disclose all affiliations, funding sources, and financial or management relationships that could be perceived as potential sources of bias. The authors disclosed none.