A 26-year-old female presented with complaints of vaginal bleeding. Her history was significant for fetal loss during her only prior pregnancy. Her last menstrual period was 6 weeks prior. The urine pregnancy test result was positive. She had visited an outside hospital the day before and was diagnosed with a threatened abortion. The patient reported that her ultrasound results at the time had revealed a “normal early pregnancy.” Bedside transvaginal ultrasonography was performed (see video, online only) and a bicornuate uterus was identified. A pregnancy with gestational sac, yolk sac, and small fetal pole was identified high in the right cornual limb. The endo-myometrial mantle or EMM (the distance from the outer part of the gestational sac to the uterine wall) was found to be 5.6 mm. No free fluid was identified.

A bicornuate uterus may be appreciated as a continuation of the midline septa down the uterus.1 This may be best visualized in the short axis, or coronal plane, as the center endometrial stripe will divide into 2 stripes rising up into the 2 cornual regions. In a cornual ectopic pregnancy, the pregnancy will be detected in 1 of these limbs.2 Critical ultrasound findings in this condition include a pregnancy that is seen to the periphery of the uterus, with an EMM that measures less than 5 to 8 mm in either the sagittal or coronal planes.3,4 Owing to this lack of a sufficient surrounding mantle of myometrium, uterine rupture may potentially occur as the ectopic pregnancy expands to thin the adjacent supporting tissue. In addition, women with cornual ectopic pregnancies have a higher rate of mortality than the more common ectopic pregnancy located in the ampullary region of the fallopian tube.5

Interestingly, there has been some disagreement in the literature about the exact EMM measurement that defines a cornual ectopic pregnancy. Critical EMM measurements of both 5 and 8 mm have been quoted previously. In discussion with the follow-up obstetrician, it was determined the patient would receive close follow-up with serial ultrasonography to look for thinning of the EMM below a 5-mm thickness.

Conflicts of Interest: By the WestJEM article submission agreement, all authors are required to disclose all affiliations, funding, sources, and financial or management relationships that could be perceived as potential sources of bias. The authors disclosed none.

Diagnosis of Pneumoperitoneum with Bedside Ultrasound

Spontaneous Pneumomediastinum on Bedside Ultrasound: Case Report and Review of the Literature 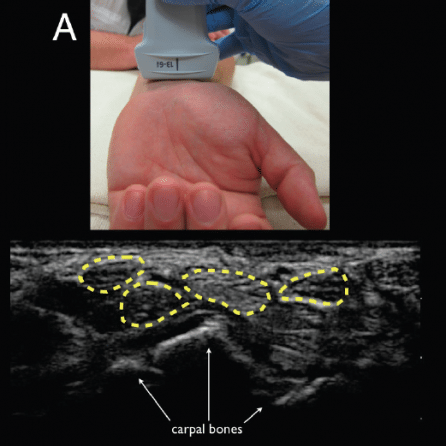