Introduction: Defensive medicine is a medical practice in which health care providers’ primary intent is to avoid criticism and lawsuits, rather than providing for patients’ medical needs. The purpose of this study was to characterize medical students’ exposure to defensive medicine during medical school rotations.

Methods: We performed a cross-sectional survey study of medical students at the beginning of their third year. We gave students Likert scale questionnaires, and their responses were tabulated as a percent with 95% confidence interval (CI).

Conclusion: Although third-year medical students have little concern about being sued, they are exposed to malpractice concerns and taught considerable defensive medicine from faculty. Most students believe that fear of lawsuits will decrease their future enjoyment of medicine. However, less than a quarter of students felt their specialty choice would be influenced by malpractice worries and that malpractice concerns lessened their enjoyment of learning medicine. [West J Emerg Med. 2014;15(3):293–298.]

The ballooning cost of malpractice claims and insurance has ignited considerable healthcare policy debate and has generated the phenomenon known as defensive medicine (DM), defined as medical practices in which healthcare providers’ primary intent is to avoid criticism and lawsuits, rather than providing for patients’ medical needs.1,2 Although DM practice is difficult to precisely quantify, investigators have determined that approximately 5–10% of diagnostic tests and therapeutic interventions are performed because of litigation concerns,3,4 and experts have estimated the cost of DM in the United States (U.S.) at $9 to $18 billion annually, consuming approximately 1–2% of U.S. healthcare dollars.5–7

DM can take either a negative or positive form, depending on the direction of deviation from accepted best clinical practices.2 Negative DM, sometimes referred to as avoidance behaviors, consists of avoiding high-risk medical tests and procedures, as well as patients who are considered to be high risk or litigious. Conversely, positive DM, sometimes referred to as assurance behavior, involves the ordering of unnecessary or excessive diagnostic tests, procedures and referrals.2,8 In a 2009 American Medical Association sponsored survey of 1,231 primary care physicians, surgical specialists, and non-surgical specialists, 91.0% agreed that physicians order more tests and procedures than needed to protect themselves from malpractice suits. There were no statistical differences in responses across geography, type of practice, or professional society affiliation.9

In a previous longitudinal study, we evaluated emergency medicine (EM) interns within 3 months of beginning their internship and EM residents within 3 months of completion of residency. We found that interns start with a moderate amount of DM exposure and malpractice concern (MC), and that MC decreased slightly by the end of residency.10Given this early appearance of DM and MC, we postulated that much of this DM and MC may arise during medical school, and that there may be a “hidden curriculum” as described by other investigators.11–13 The purpose of this study was to characterize medical students’ exposure to defensive medicine during medical school rotations, i.e., determine whether a hidden curriculum of DM exists. Specifically, we sought to determine level of students’ DM and MC exposure at the beginning of medical school year three. We hypothesized that medical students are exposed to considerable DM and MC at the beginning of their third-year clinical rotations long before the transition to residency.

During June 2008, we conducted a cross-sectional survey study at a San Francisco medical school and associated hospital rotation sites, surveying students at the beginning of medical school year three. Query of clerkship directors determined that none of the rotations had lectures specific to legal or defensive medicine. The school’s Committee on Human Research approved this study.

In a previous study of EM residents, we adapted an instrument developed and validated by the U.S. Congress Office of Technology Assessment to assess DM practices and attitudes toward malpractice of cardiologists, internists, general surgeons and obstetrician-gynecologists.10 We adjusted this survey to make it applicable to medical students, creating the MSDefMed instrument (Appendix). We randomly sorted 13 DM and MC questions among 18 other questions evaluating attitudes regarding specialty satisfaction, cost containment, and medical uncertainty. To decrease the effect of reflex responses, we also phrased questions in both negative terms (“As a medical student, I rarely worry about being sued”) and positive terms (“I worry about malpractice when I do not know a patient’s diagnosis”). Answer choices were: 1 strongly agree, 2 agree, 3 neither agree nor disagree, 4 disagree, and 5 strongly disagree. We pilot tested this final instrument on 4 medical students to assure question clarity and answer consistency.

At an orientation session for third-year clinical rotations in June 2008, medical students were asked to complete the MSDefMed survey. We emphasized that this survey was anonymous and strictly voluntary, and we did not tell them the purpose of the study. We instructed those students participating to complete it without consulting other students or outside sources.

Of the approximately 160 students in the class, 124 students were present at the third-year orientation session, 102 (82%) of the students present completed the voluntary MSDefMed survey. Some students were working rotations in other locations or otherwise unavailable during the time that the survey was administered while some chose not to complete it. 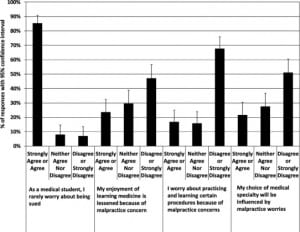 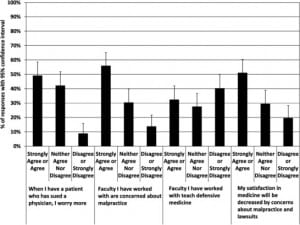 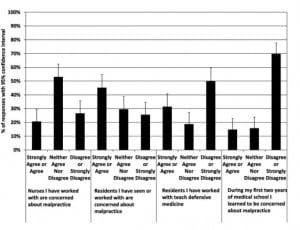 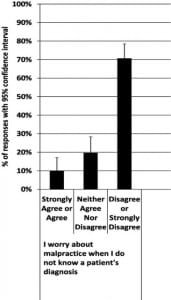 “We need the CT scan for legal reasons.” This faculty quote noted by one of the students in this study group illustrates what may be perceived as DM during clinical rotations. In this study we found evidence of a hidden curriculum with considerable reported exposure to DM and MC. Our findings are in line with those reported by O’Leary et al.8, who noted substantial experiences with DM by medical students and residents. Although students rarely worry about being sued, most noted that faculty and residents are concerned about malpractice, and most students believed that their future enjoyment of the medical practice would be lessened by MC.

Comparing our results in this medical student study with results from our study of EM interns and residents, we noted that students are much less concerned about being sued—an expected finding given their much lower level of patient responsibility. While over 70% of interns stated that their enjoyment of medicine was lessened by MC, only 23% of medical students noted decreased enjoyment of medicine due to MC. Similar to the responses of interns and residents, however, MC had only moderate detrimental effects on students’ learning of procedures (16.7%) and choice of medical specialty (21.6%). This lack of effect on choice of medical field is notable, given the exposure to DM and MC during rotations.

While the effect of DM on health care costs may be impossible to quantify, its impact on healthcare costs is undeniably real. Although some authorities have proposed that DM leads to better or more conscientious care,14 there is no evidence that it leads to better outcomes and there is strong evidence that it increases costs.15 Dekay and Asch16 argue that while a few select patients may experience improved health outcomes from DM, DM-diagnostic testing leads to an overall worsening of clinical outcomes due to unnecessary, harmful procedures performed in response to incidental findings and false positive diagnostic tests. Even “non-invasive” tests like CT are now recognized to carry significant risks with as many 2% of all cancers attributed to ionizing radiation from this imaging modality.17

The first step in addressing DM is to identify where it originates. In our previous study, we found that EM residents enter internship with a moderate amount of DM and MC, which led us to hypothesize that DM and MC may arise in a hidden curriculum during medical school. We identified considerable DM exposure even before the majority of clinical rotations, perhaps from preclinical medical school or before. However, the levels of our study are much less than the levels of DM exposure and MC we noted in EM interns.10 It is possible that MC arises during years 3 and 4 of medical school. The relatively abrupt increase in patient care responsibility and legal exposure that occurs upon starting internship likely intensifies malpractice awareness and defensive medicine concerns.

Our study is subject to all of the well-described limitations inherent in the convenience sampling method. Additionally, further DM and MC that occurs during the third and fourth year of medical school may not be captured by our early third-year sampling. Another limitation of our study may be the Hawthorne Effect, the change in behavior of subjects when they know they are being studied. However, our questions about DM and MC were mixed with a similar number of other unrelated questions to obscure our study objectives and minimize this effect. Social desirability bias against divulging a DM hidden curriculum may have also impeded students’ willingness to report episodes of DM. Additionally, while we noted both exposure to physician DM and MC actions, and students’ own malpractice concerns, the influence of the former on the latter is not known.

Although our survey was based on a well-validated instrument, the malpractice fear that students may experience in real patient encounters may be more dramatic. Finally, we implemented our study at a medical school with most rotations in county and public university hospitals in a state with a $250,000 limit on malpractice awards for pain and suffering (noneconomic) damages. The levels of DM and MC observed by medical students rotating at private hospitals or in states without capitations may be higher.

Although third-year medical students have little concern about being sued, they are exposed to malpractice concerns and taught a considerable amount of defensive medicine from faculty and residents, less so from nurses. Most students believe that fear of lawsuits will decrease their future enjoyment of the practice of medicine. However, less than a quarter of students felt that their choice of specialty would be influenced by malpractice worries, and a modest number of students felt that malpractice concerns lessened their enjoyment of learning medicine.

The Emergency Medicine Group Standardized Letter of Evaluation as a Workplace-based Assessment: The Validity Is in the Detail