Predictors of Psychiatric Boarding in the Emergency Department

The emergency psychiatric care is system is overburdened in the United States. Patients experiencing psychiatric emergencies often require resources not available at the initial treating facility and frequently require transfer to an appropriate psychiatric facility. Boarding of psychiatric patients, defined as a length of stay greater than four hours after medical clearance, is ubiquitous throughout emergency departments (EDs) nationwide. Boarding is recognized as a major cause of ambulance diversions and ED crowding and has a significant adverse impact on healthcare providers, patient satisfaction, and hospital costs. We sought to identify differences between patients who boarded versus patients who did not board, to identify factors amenable to change and identify interventions that could lead to a decrease in overall psychiatric patient length of stay and improve patient care.

This study is a retrospective multicenter cohort study of all patients assessed to require inpatient psychiatric hospitalization at two community EDs in Illinois from July 1, 2010 through June 30, 2012. We identified 671 patients and collected insurance status, sex, age, time of arrival, time of disposition and time of transfer.

There was a statistically significant difference in the insurance status between the cohort of patients boarding in the ED compared to non-boarders prior to inpatient psychiatric admission. Our study identified 95.4% of uninsured patients who were boarded in the ED, compared to 71.8% of Medicare/Medicaid patients and 78.3% of patients with private insurance (χ2=50.6, df=2, p<0.001). We found the length of stay to be longer for patients transferred to publicly funded psychiatric facilities compared to those transferred to private facilities, with a mean time spent in the ED of 1,661 minutes and 705 minutes, respectively (p<0.001). Patients with Medicare/Medicaid were nearly twice as likely to return to the ED for psychiatric emergencies than self-pay and privately insured patients, requiring repeat inpatient psychiatric admission (estimate=0.649, p=0.035, OR=1.914).

Emergency department (ED) “crowding” is an international problem that has received much attention as it is associated with increased morbidity and mortality.3 A major contributing factor in ED crowding is patient boarding. A 2008 American College of Emergency Physicians survey found that nearly 80% of EDs reported boarding psychiatric patients who were not admitted to their facility.1 Psychiatric patients have been “deinstitutionalized” over recent decades with their care shifting from the inpatient to outpatient setting. In 1970, state and county psychiatric inpatient beds numbered approximately 400,000 and in 2006 numbered at just 50,000.4,5 Concurrently, patients with substance abuse or mental health problems have surged from 5.4% of all ED visits in 2000 to 12.5% of the 95 million ED visits in 2007.6 The decrease in inpatient psychiatric beds combined with the increase in mental health-related ED visits have amplified the number of patients boarding in the ED.1

Recently, Chang et al.7 explored characteristics of patients who boarded over 24 hours at five Massachusetts’ hospitals and found that homelessness, inter-hospital transfer, public insurance and use of restraints or sitters placed the patient at a higher risk for boarding in the ED.7 Only 2.6% of Massachusetts residents were uninsured in the state’s integrated healthcare system at the time of the study. A similar study by Weiss et al.8 found that a medical need for hospitalization, restraint use and use of diagnostic imaging as factors associated with prolonged boarding.8 Additional research identified high variability in boarding times between hospitals and postulated that this was due to differences in psychiatric services offered and inpatient bed availability.9 In pediatric patients requiring inpatient psychiatric admission, one study found patients who boarded were more likely to have presented over the weekend, during school vacation or with suicidal ideations.10 A prospective cohort study in which psychiatric clinicians were surveyed found that staff and bed availability, need for clinical stability, obtaining additional information and patients’ financial issues as the rate limiting step for discharge of psychiatric patients.9 While several studies have evaluated the characteristics of psychiatric boarders in Massachusetts, few have studied this cohort of psychiatric boarders in a state without an integrated healthcare system in place.11,12 Our hypothesis was that patients without insurance are at highest risk for boarding in the ED. Through the identification of predictive factors that lead to ED boarding we hope to bring attention to the need for increased psychiatric services for this group as well as improve ED efficiency and allocation of resources.

The authors conducted a retrospective multicenter cohort study of adult patients presenting to two suburban teaching hospital EDs in Illinois from July 1, 2010 through June 30, 2012 assessed to require inpatient psychiatric hospitalization. Exclusion criteria consisted of patients under 18 years of age, patients over 65 years of age, patients who required stabilization of a medical condition prior to transfer, patients who were pregnant, and patients who were discharged from the ED prior to transfer to a psychiatric facility. The main outcome was placement into a psychiatric facility or boarding in the ED. All patients were evaluated in the ED and deemed to require inpatient psychiatric treatment by the attending emergency physician. Institutional review board approval was granted by the host hospital system and the host educational institution.

The hospital’s medical record department generated a list of patients meeting inclusion criteria into an Excel spreadsheet. Using patient encounter numbers, data were collected from each chart in the hospital’s general medical record system and entered into the spreadsheet by student research assistants. One of the researchers (RM) then coded these data. De-identified coded data were sent to the host institution statistician for analysis. We analyzed data using statistical package for the social sciences/predictive analytics software statistics.

The main outcome measure was placement into a psychiatric facility or boarding, defined as remaining in the ED for four hours or longer following disposition decision. Patients who boarded were followed to see if they re-presented to one of the two participating EDs within a year of initial presentation for a complaint requiring psychiatric evaluation. Study participants were evaluated for the following: time from presentation to the ED to decision to admit; time from admission decision to transfer to a psychiatric facility; time of ED presentation to transfer to a psychiatric facility; and date of first re-presentation, or “bounce back,” to the ED within 12 months following initial ED psychiatric visit. We collected additional demographic and treatment data to compare the boarding to the non-boarding cohort to examine factors that may contribute to the “bounce back.” These factors included race, sex, age and insurance coverage (private, Medicare/Medicaid or self-pay).

Table. Insurance effect on psychiatric boarding in the emergency department. 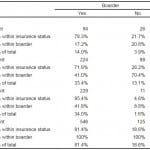 ED crowding is a multifactorial problem faced by hospitals nationwide. The boarding of patients is recognized as a major cause of ambulance diversions and ED crowding, and has a significant impact on healthcare providers, patient satisfaction, and hospital costs.2,13 Psychiatric boarding is becoming an increasingly more prevalent practice disrupting patient care as well as ED throughput and is only expected to increase with the continued closures of state-run psychiatric facilities. Our findings show that indeed patients without insurance are at highest risk for boarding in the ED. Medicare/Medicaid patients, in our study, were most likely to require repeat inpatient psychiatric admission. This could be because Medicare/Medicaid patients are better connected to the healthcare system than the uninsured; further research is needed to investigate this correlation. We have also identified at risk cohorts of psychiatric patients, uninsured and Medicare/Medicaid, for whom we can improve care and ED throughput.

Secondary outcomes identified a population of psychiatric patients who were likely to return to the ED during the study period and require inpatient psychiatric admission. Medicare/Medicaid patients were nearly twice (OR=1.919) as likely to return to the ED during the 24-month study period requiring psychiatric admission. Ironically, these patients spent the least time boarding in the EDs compared to privately funded patients. The variables of age, sex, boarder status, race/ethnicity, were not found to be significantly related to “bounce back.” This suggests that Medicare/Medicaid patients may be a population at risk for psychiatric decompensation. Whether this is due to lack of outpatient options or other factors should be further investigated.

Limitations of this study, as with any retrospective cohort study, are an increased risk for errors due to confounding and selection bias. We attempted to limit selection bias as data were collected by research assistants blinded to the primary and secondary outcomes. Furthermore, data were analyzed by an outside statistician who was also blinded to the outcome measures. While it is difficult to establish a cause-and-effect relationship from retrospective cohort studies, our research identifies several areas for future prospective studies to include the relationship of insurance status to boarder status and frequency of return to the ED. Another limitation is that the study was limited to patients from two community EDs in Illinois, and results may not be applicable to other regions or hospital systems. Results on “bounce back” may also be skewed as data were not available on patients who may have presented to a hospital outside of our catchment area.

Our study found patients without insurance boarded significantly longer than Medicare/Medicaid and privately insured patients. In addition, patients with private insurance boarded longer than those with Medicare/Medicaid. Secondary analysis identified significantly longer ED length of stay for patients transferred to publicly funded facilities compared to those transferred to private facilities.

Dumpster Diving in the Emergency Department: Quantity and Characteristics of Waste at a Level I Trauma Center