Introduction: Starting in 2008, emergency ultrasound (EUS) was introduced as a core competency to the Royal College of Physicians and Surgeons of Canada (Royal College) emergency medicine (EM) training standards. The Royal College accredits postgraduate EM specialty training in Canada through 5-year residency programs. The objective of this study is to describe both the current experience with and the perceptions of EUS by Canadian Royal College EM senior residents.

Methods: This was a web-based survey conducted from January to March 2011 of all 39 Canadian Royal College postgraduate fifth-year (PGY-5) EM residents. Main outcome measures were characteristics of EUS training and perceptions of EUS.

Results: Survey response rate was 95% (37/39). EUS was part of the formal residency curriculum for 86% of respondents (32/37). Residents most commonly received training in focused assessment with sonography for trauma, intrauterine pregnancy, abdominal aortic aneurysm, cardiac, and procedural guidance. Although the most commonly provided instructional material (86% [32/37]) was an ultrasound course, 73% (27/37) of residents used educational resources outside of residency training to supplement their ultrasound knowledge. Most residents (95% [35/37]) made clinical decisions and patient dispositions based on their EUS interpretation without a consultative study by radiology. Residents had very favorable perceptions and opinions of EUS.

Emergency ultrasound (EUS) in Canada has developed in a delayed fashion compared to the United States. The Canadian Association of Emergency Physicians (CAEP) initially issued a position statement in 1999 supporting the availability of focused ultrasound 24 hours per day in the emergency department (ED).1 It has since undergone revisions in 2006 and most recently 2012.2,3 The 2006 position statement was the first revision supporting the incorporation of EUS training into emergency medicine (EM) residency programs accredited by the Royal College of Physicians and Surgeons of Canada (Royal College).2 The Royal College accredits postgraduate EM specialty training in Canada through 5-year residency programs. From 2008, EUS was officially introduced as a core competency to the Royal College EM training standards.4

In the United States, the American College of Emergency Physicians (ACEP) first published a position statement supporting the use of ultrasound by emergency physicians in 1990.5 Starting in 1996, the Accreditation Council for Graduate Medical Education (ACGME) EM core curriculum required EUS competence for residency graduation.6 Furthermore, many prominent EM and non-EM organizations have endorsed the use of EUS, including ACEP, the Society for Academic Emergency Medicine (SAEM), the Council of Emergency Medicine Residency Directors (CORD), and the American Institute of Ultrasound in Medicine (AIUM).7–10

Although EUS training has been well described in the United States, there is only a paucity of data about the state of EUS training in Canadian Royal College EM residency programs.11–13 There are currently no data about resident perceptions of EUS training in Canada, yet it is important to incorporate this feedback into training programs to optimize the resident educational experience with ultrasound. Both the Royal College and the ACGME include residents in the accreditation processes of their postgraduate medical programs, through direct participation in accreditation teams and through program evaluations or surveys.14,15 The objective of this study is to describe both the current experience with and the perceptions of EUS by Canadian Royal College EM senior residents.

This was a web-based survey study approved by the Sunnybrook Health Sciences Research Ethics Board.

The study investigators designed a website-based survey instrument (Appendix) based on previously published survey studies focusing on EUS training.11,13,17 Seven EM residents reviewed the survey for language and ease of use. Their comments were incorporated into the revision of this instrument. Potential resident participants were emailed a link to the website-based survey on Zoomerang (MarketTools Co, San Francisco, California) in January 2011. The survey consisted of 23 mandatory close-ended questions assessing EUS training and perceptions. Questions assessing perceptions of EUS were answered on a 5-point Likert scale (1=strongly agree, 2=agree, 3=neutral, 4=disagree, 5=strongly disagree). Non-respondents were sent reminder emails at 2, 4, 6, and 8 weeks after the initial email. An incentive in the form of an iTunes (Apple Inc, Cupertino, California) email gift certificate in the amount of $10 was provided for successful survey completion. All respondents were immediately de-identified from their responses after completion of the survey.

Table 1 outlines EUS training received by residents as well as ultrasound applications performed by residents in their own clinical practice. Table 2 summarizes ultrasound-guided procedural training received and ultrasound-guided procedures performed in clinical practice. Table 3 details the different types of EUS instructional material provided by EM residency programs to their residents. The most commonly provided instructional material was an ultrasound course for 86% (32/37). The majority of residents (73% [27/37]) used other educational resources outside of residency training to supplement their EUS knowledge beyond that offered or required by their residency program. Table 3 also breaks down the different types of instructional material used by the 27 respondents who used supplementary educational resources. 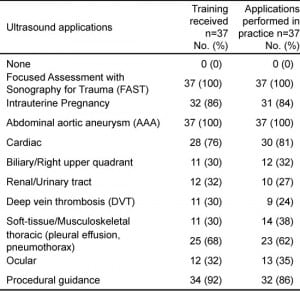 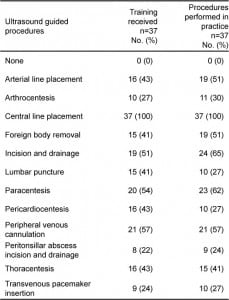 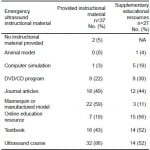 Almost all respondents (95% [35/37]) make clinical decisions and patient dispositions based on their EUS interpretation without a consultative study by radiology. In this group, 89% (31/35) only apply this type of decision making for specific EUS applications. Table 4 describes these EUS applications. Figure 1 summarizes resident perceptions of EUS and EUS training. 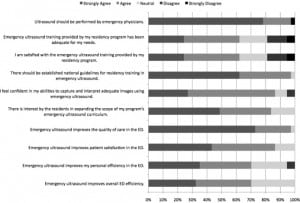 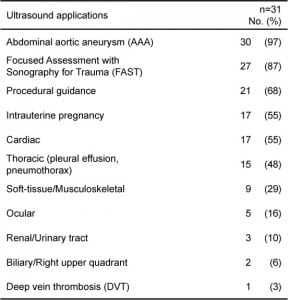 Bedside ultrasound is a paradigm shift from traditional consultative imaging to the performance of a focused, dynamic study to allow direct correlation with a patient’s signs and symptoms.18 It has been shown to improve outcomes, decrease costs, and decrease complications.19–21 The majority of EUS education in the United States occurs during EM residency training, but there is only a paucity of corresponding data about the state of EUS training in Canadian Royal College EM programs and no information about resident perceptions of their EUS training.11–13,17

Our data demonstrate that the majority of Royal College EM residents receive training in EUS as part of their residency curriculum. While EUS training is prevalent, the scope of training is limited to focused assessment with sonography for trauma (FAST), intrauterine pregnancy, abdominal aortic aneurysm (AAA), cardiac, and procedural guidance. This scope satisfies the 2008 Royal College objectives of training in EM and reflects the applications listed in CAEP’s 2006 position statement on EUS.2,4 However, this is a smaller scope of practice compared to the 2008 ACEP EUS guidelines, which additionally list biliary, urinary tract, deep vein thrombosis (DVT), soft tissue/musculoskeletal, thoracic, and ocular as core EUS applications.7 The 2012 CAEP position statement now includes these additional applications as advanced EUS applications.3 There was no significant difference between the EUS applications for which residents received training and the EUS applications performed by residents in their own clinical practice.

Despite the seemingly focused scope of training, more than half of respondents reported using advanced EUS applications like thoracic ultrasound and ultrasound guidance for arterial line placement, foreign body removal, incision and drainage, paracentesis, and peripheral venous cannulation. However, a survey study of Royal College EM program directors in 2011 reported that less than half of all programs offer training in these specific advanced applications.13 This discrepancy between residents and program directors has several possible explanations, including the under-reporting of training by program directors or the over-reporting of training by residents.

Our results provide another possible explanation. With 73% of residents using other educational resources outside of residency training, the use of advanced EUS applications may be driven by the residents themselves. The most commonly used supplementary educational resources were online educational resources (56%), textbooks (52%), and ultrasound courses (52%). Residents had very favorable perceptions and opinions of EUS, and most strongly believed that ultrasound should be performed by emergency physicians. Residents also believed that there was interest by their resident group in expanding the scope of their program’s EUS curriculum. There is a high level of enthusiasm for training in EUS, and educators should be aware that a majority of residents are using supplementary educational resources. It is up to educators to direct residents to EUS resources that are accurate, effective, and evidence-based. We would also argue that educators need to ensure that their faculty continues to hone their skills in such advanced applications to provide appropriate supervision to their residents.

This study specifically surveyed PGY-5 EM residents and reported their responses. As these responses are based on the perceptions of each resident, they may not reflect the actual reality of EUS training in their residency programs. It is also possible that the monetary incentive resulted in rapid and factitious completion of the survey simply to receive the incentive; however, given the small overall value of the incentive, the likelihood of this occurrence is low. Additionally, we did not observe any obvious patterns in the data to suggest such responses. The survey instrument was designed by the study investigators and is not a formally validated survey instrument. Finally, 4 respondents (11%) self-reported participation in an external EUS fellowship program during residency training, so these results may provide an overestimate of EUS training provided by Royal College EM residency programs.

EUS training in Royal College EM programs was prevalent and perceived favorably by residents, but there is heterogeneity in resident training and practice of EUS. This suggests variability in both the level and quality of EUS training. These results suggest a potential role for national guidelines to standardize ultrasound training for all Royal College EM programs. Additionally, the use of ultrasound for advanced applications is popular and prevalent among residents. Future research is needed to determine the best methods for delivering EUS education and training.

Conflicts of Interest: By the WestJEM article submission agreement, all authors are required to disclose all affiliations, funding sources and financial or management relationships that could be perceived as potential sources of bias. Michael M. Liao was supported by the Agency for Healthcare Research and Quality (AHRQ) (F32 HS018123). The other authors disclosed none.