Recent research has investigated the use of ultrasound (US) for confirming endotracheal tube (ETT) placement with varying techniques, accuracies, and challenges. Our objective was to evaluate the accuracy of a novel, simplified, four-step (4S) technique.

We conducted a blinded, randomized trial of the 4S technique utilizing an adult human cadaver model. ETT placement was randomized to tracheal or esophageal location. Three US experts and 45 emergency medicine residents (EMR) performed a total of 150 scans. The primary outcome was the overall sensitivity and specificity of both experts and EMRs to detect location of ETT placement. Secondary outcomes included a priori subgroup comparison of experts and EMRs for thin and obese cadavers, time to detection, and level of operator confidence.

Rapid and reliable confirmation of endotracheal tube (ETT) placement during intubation is essential. The incidence of esophageal intubation during emergency conditions has been reported to be as high as 8-14%.1,2 Methods of confirmation include direct visualization of passage, chest and abdominal auscultation, esophageal detector devices, pulse oximetry, and end tidal capnography (both colorimetric and quantitative). With the exception of continuous end tidal CO2 monitoring, each alternative method is fraught with potential problems resulting in poor sensitivities and specificities. Although continuous end tidal CO2 has become the preferred method,3 there are still significant risks of false positives with hypopharyngeal placement and false negatives during cardiac arrest.4-6 Moreover, continuous end tidal CO2 monitoring is not widely available in many emergency departments (EDs).7

As a result, there has been increasing research into the use of ultrasound to visually confirm ETT placement. Multiple studies assessing the use of transcricoid ultrasonography to confirm ETT placement have been proposed.8-10 Of note, all of these studies have utilized a midline approach, which has been suggested to miss the second hyperechoic air-mucosa (A-M) interface in cases where the esophagus is located posterior to the trachea – a situation noted in as many as 16% of patients.11 Additionally, prior studies have demonstrated that dynamic ultrasonography provides better accuracy than static ultrasonography. However, in a busy emergency department environment, having an ultrasound on top of the patient’s neck during the intubation process is an additional impediment that may deter its use by many providers. Hence, current research has yet to describe a reliable method to exclude esophageal intubation without performance of the ultrasound during the actual intubation.

The purpose of this study was to determine the accuracy of a novel, rapid, four step (4S) US technique to confirm correct endotracheal tube placement (Figure 1).

This was a two-part, randomized pilot study of a novel technique for airway ultrasonography. Local institutional review committee acknowledgement for the study was obtained. All experts and residents signed an informed consent prior to entering the study.

Study Setting and Selection of Participants

This study was performed in the cadaver lab of an academic hospital in Chicago, IL. The study subjects for part one included an Emergency Ultrasound Director and two Emergency Ultrasound fellows at the end of their fellowship year with prior training in airway ultrasound. The study subjects for part two included 45 postgraduate years two through four (PGY 2-4) emergency medicine residents (EMRs) with no prior training in airway ultrasound.

Two thin (body mass index [BMI] 17.8 and 20.1) and two obese (BMI 33 and 36.5) adult human cadavers were used for all of the intubations. A random number generator was utilized to decide whether the ETT would be placed into the esophagus or the trachea with the goal of equivalent numbers of esophageal and tracheal intubations in order to best define the test characteristics. Each cadaver was carefully intubated by a separate attending emergency physician using a video laryngoscope prior to the entrance of the study subjects into the room. All physicians performing the ultrasound were blinded to the ETT location.

To adequately assess for greater than 90% sensitivity and specificity with 90% power level and a two-tailed alpha error of 0.05, we calculated a total required sample size of 126. In order to better assess the experts for subgroup analysis, we increased the expert scans to 60 and the resident scans to 90 for a total of 150 scans.

After the technique was developed, expert accuracy was assessed as described above. Three blinded emergency US experts each performed ten independent scans on the thin model, followed by ten additional scans on the obese model. The accuracy, operator confidence, and performance time were recorded for all three operators.

In part two, 45 blinded PGY 2-4 EMRs were given a ten minute, hands-on, bedside educational module on the 4S technique by the same US expert (J.B.) during a regularly scheduled EMR cadaver lab (Figure 6). The thin and obese cadavers were then intubated as described in the above methods. The EMRs were assessed for accuracy, operator confidence, and performance time.

A research coordinator recorded the true location of the ETT, study subject prediction of ETT location, and time to ETT prediction. Additionally, operator confidence was assessed by the research coordinator utilizing a Likert scale ranging from 1-5. All descriptive and performance data were arranged by participant with each US expert and EMR having their own unique column for each variable.

All statistical analyses included in this study were performed using Statistical Package for the Social Sciences (Version 21.0. Armonk, NY). In order to determine US expert and EMR accuracy, two-by-two contingency tables were generated comparing each operator’s ETT prediction to the ETT true location for each cadaver. Descriptive statistics, including population estimates at a 95% level of confidence, were also generated for US expert and EMR sensitivity and specificity of endotracheal placement, operator confidence and performance time. 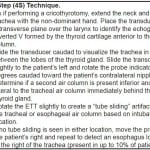 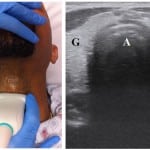 Figure 2. Transverse view of the tracheal air column (A) between the lobes of the thyroid gland (G). 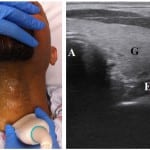 Figure 3. Initial oblique view of the tracheal air column (A), thyroid gland (G), and collapsed esophagus (E) in the typical location between the trachea and carotid artery (C). 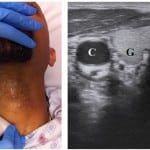 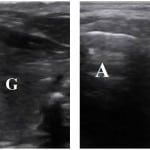 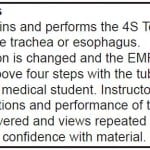 In the ED setting, it is essential to quickly confirm correct ETT placement. Although many tools and clinical examination findings are available, each has limitations. Even colorimetric end tidal CO2 detectors may have false positives and negatives resulting in accuracy as low as 67.9% during cardiac arrest.4-6 Moreover, most methods require multiple ventilations, thereby increasing the risk of gastric distension and aspiration if incorrectly placed.

As a result, there has been increasing research into the use of airway ultrasound to quickly confirm ETT placement. Airway ultrasonography utilizes equipment readily available in most EDs without requiring ventilation of the patient. Multiple prior studies assessing the utility of transcricoid ultrasonography to confirm ETT placement have had variable success.8-10,12-15 However, the majority of these trials have required either the addition of the sliding lung sign with an extra series of steps that may deter providers from performing the exam; or dynamic ultrasonography that requires an additional provider to perform the airway ultrasound at the crowded head of the bed while a separate provider is intubating.

This cross-sectional, randomized trial aimed to assess the accuracy, confidence, and speed of a novel approach to the airway ultrasound exam for ETT confirmation. Building on earlier work, we developed a practical approach to airway ultrasound for endotracheal tube placement confirmation. One unique component of our approach was the use of a paramedian transverse view, rather than a midline longitudinal view, thereby potentially improving the ability to visualize an esophageal intubation when located posterior to the trachea. Additionally, the use of 30 degrees of oblique angulation allowed for greater surface area of the trachea and esophagus, facilitating the detection endotracheal tube movement.16 Finally, the use of slight tube rotation mimics the motion artifact associated with dynamic ultrasonography, while allowing the exam to be performed after the intubation has occurred. Benefits include the ability to avoid ventilation prior to confirmation, decreased number of instruments near the patient’s head and neck during the actual intubation attempt, and the potential ability to perform this when only one provider is present.

Our pilot results suggested that the 4S approach was quite accurate in identifying endotracheal and esophageal intubation in both thin and obese cadavers when performed by expert sonographers. Previous studies by Saglam et al.8 and Park et al.13 demonstrated good results, but required the addition of the lung sliding that requires multiple ventilations for confirmation. Ma et al.,9 Werner et al.,12 Milling et al.,14 and Muslu et al.,15 demonstrated excellent sensitivity and specificity with the dynamic transtracheal approach. However, this requires multiple providers and an ultrasound probe on the trachea during the actual intubation attempt. Finally, a recent study by Chou et al.10 demonstrated 98.9% sensitivity and 94.1% specificity for endotracheal intubation utilizing a static transtracheal approach. The authors note in their study that the missed esophageal intubations may have been secondary to a posterior esophagus, which is more likely to be identified correctly with our paramedian approach. Additionally, most of the patients studied were relatively thin with an average BMI of 23, thus limiting its applicability to obese patients.

This study also suggested that the 4S technique is accurate in identifying correct ETT location in thin patients, but appears less accurate in obese cadavers, when performed by novice sonographers. In the study by Chou et al.,10 the two senior residents were supervised by certified ultrasound experts and had received a one hour lecture and eight hours of practice time prior to the study. The residents in our study demonstrated a slightly lower accuracy. However, our residents included all levels of training and only a short, ten-minute educational session. Additionally, the nine hour training session performed by Chou et al.10 may not always be feasible for all locations. Our study was performed during a regularly scheduled cadaver lab and demonstrated only slightly lower accuracy with the ten minute training session. This suggests that the ideal training time may, in fact, be sometime between ten minutes and nine hours.

The primary limitation of this pilot study was the use of a cadaver model. Although fresh cadavers were used, this may not completely mimic the anatomy or experience in a live patient in the ED environment. As a pilot study of a novel technique, the cadaver model provided a safe research and educational environment. Moreover, the cadaver model allowed for a significantly increased number of esophageal intubations when compared to an ED-based population. This provided the opportunity to determine a more accurate assessment of the detection of both endotracheal and esophageal intubations than would be possible in an ED environment. Another limitation was the pooling of expert sonographers with EMRs for assessing the primary outcome. It became apparent by subgroup analysis that the lower overall specificity was strongly influenced by the EMR obese cadaver group. Finally, due to a busy cadaver lab agenda, teaching sessions were limited to 10 minutes which may have been a significant contributing factor to the lower accuracy. In subsequent studies, we will confirm the accuracy of the 4S technique in ED patients as well as the optimal teaching time required.