The Appropriate Use of Testing for COVID-19

Many public officials are calling for increased testing for the 2019 novel coronavirus disease (COVID-19), and some governments have taken extraordinary measures to increase the availability of testing. However, little has been published about the sensitivity and specificity of the reverse transcriptase-polymerase chain reaction (RT-PCR) nasopharyngeal swabs that are commonly used for testing.

As an emergency and wellness physician, scientist, father, and 55-year-old man, I have a keen interest in the coronavirus and the resulting COVID-19/severe acute respiratory syndrome (SARS) CoV2 illness. Based on all I have heard from the scientific community, a review of the literature, and a review of historical facts related to other epidemics, I believe we are missing some key points, particularly with regard to how we are approaching prevention of morbidity and mortality.

Healthcare Ethics During a Pandemic

As clinicians and support personnel struggle with their responsibilities to treat during the current COVID-19 pandemic, several ethical issues have emerged.

During the current COVID-19 pandemic, the limited surge capacity of the healthcare system is being quickly overwhelmed. Similar scenarios play out when an institution’s systems fail, or when local or regional disasters occur. In these situations, it becomes necessary to use one or more alternative care sites (ACS).

In disasters such as the COVID-19 pandemic, we need to use all available resources to bolster our healthcare workforce. Many factors go into this process, including selecting the groups of professionals we will need, streamlining their licensing and credentialing processes, identifying appropriate roles for them, and supporting their health and well-being.

Ibuprofen During the COVID-19 Pandemic: Social Media Precautions and Implications

The ongoing spread of COVID-19, also known as the novel coronavirus, has created significant concerns often leading to panic throughout the world as to its virulence and lethality. Regularly published media track newly infected patient rates and deaths further driving public panic, which invariably leads to people seeking information.

Humanism in the Age of COVID-19: Renewing Focus on Communication and Compassion

The global novel coronavirus (COVID-19) pandemic continues to worsen and has become one of the largest clinical and operational challenges faced by emergency medicine since its inception as a specialty. As the virus spreads across the United States, our emergency departments (ED) continue to see increased volumes of infected patients, many of whom are not only critically ill, but acutely aware and fearful of their circumstances and potential mortality.

On March 10, 2020, the World Health Organization declared a global pandemic due to widespread infection of the novel coronavirus 2019 (COVID-19). We report the preliminary results of a targeted program of COVID-19 infection testing in the ED in the first 10 days of its initiation at our institution.

The National Institutes of Health is conducting a Phase 1 clinical trial to evaluate for a potential vaccine and the recipients have started to receive the investigational vaccine.2 We present a brief overview of the potential prophylactic and treatment agents under investigation, some which could be initiated in the ED if proven effective.

Sex- and Gender-specific Observations and Implications for COVID-19

Angiotensin-converting enzyme 2 (ACE2) and its role in viral transmission and associated morbidity has also been a topic of recent COVID-19 associated discussion. ACE2 receptors on pulmonary endothelium serve as a main entry point for coronavirus.

The lack of COVID-19 testing capacity threatens the ability of both the United States (US) and low middle income countries (LMIC) to respond to this growing threat, The purpose of this study was to assess the effectiveness through participant self-assessment of a rapid response team (RRT) mobile laboratory curriculum.

Scabies is a highly contagious, globally prevalent, parasitic skin infestation caused by Sarcoptes scabiei var. hominis, also known as the itch mite. There have been outbreaks not only in the developing world, but also in the developed world among refugees and asylum seekers.

This paper reports a modification of the 3I Tool for use in the initial detection and management of patients under investigation for 2019-nCoV. After initial assessment for symptoms and epidemiological risk factors, including travel to affected areas and exposure to confirmed 2019-nCoV patients within 14 days, patients are classified in a risk-stratified system.

Our purpose here is to highlight the areas where evidence is only as strong as the methodological constructs of the research used. This article is a narrative review of the available, limited evidence on which the one-hour bundle was based.

We conducted a retrospective cohort study among patients transported by emergency medical services to compare the use of ETCO2 ≤ 25 mmHg with qSOFA score of ≥ 2 as a predictor of mortality or diagnosis of severe sepsis in prehospital patients with suspected sepsis.

Spinal epidural abscess (SEA), a highly morbid and potentially lethal deep tissue infection of the central nervous system has more than tripled in incidence over the past decade. Early recognition at the point of initial clinical presentation may prevent irreversible neurologic injury or other serious, adverse outcomes. To facilitate early recognition of SEA, we developed a predictive scoring model.

The objective of this study was to determine the frequency of sterile pyuria in women with confirmed STIs, as well as whether the absolute number of leukocytes on microscopy or nitrite on urine dipstick correlated with positive urine cultures in patients with confirmed STIs. We also sought to determine how many patients with STIs were inappropriately prescribed a UTI antibiotic.

Infection with hepatitis A virus (HAV) causes a highly contagious illness that can lead to serious morbidity and occasional mortality. Although the overall incidence of HAV has been declining since the introduction of the HAV vaccine, there have been an increasing number of outbreaks within the United States and elsewhere between 2016 and 2017.

The purpose of this study was to examine community-associated methicillin resistant Staphylococcus aureus (CA-MRSA) carriage and infections and determine risk factors associated specifically with MRSA USA300.

Dengue, Zika and Chikungunya: Emerging Arboviruses in the New World

The arboviruses that cause dengue, chikungunya, and Zika illnesses have rapidly expanded across the globe in recent years, with large-scale outbreaks occurring in Western Hemisphere territories in close proximity to the United States (U.S.). In March 2016, the Centers for Disease Control and Protection (CDC) expanded its vector surveillance maps for A. aegypti and A. albopictus, the mosquito vectors for these arboviruses.

Perception of the Risks of Ebola, Enterovirus-E68 and Influenza Among Emergency Department Patients

Emerging infectious diseases often create concern and fear among the public. Ebola virus disease (EVD) and enterovirus (EV-68) are uncommon viral illnesses compared to influenza. The objective of this study was to determine risk for these viral diseases and then determine how public perception of influenza severity and risk of infection relate to more publicized but less common emerging infectious diseases such as EVD and EV-68 among a sample of adults seeking care at an emergency department (ED) in the United States.

Identify-Isolate-Inform: A Tool for Initial Detection and Management of Zika Virus Patients in the Emergency Department

First isolated in 1947 from a monkey in the Zika forest in Uganda, and from mosquitoes in the same forest the following year, Zika virus has gained international attention due to concerns for infection in pregnant women potentially causing fetal microcephaly. More than one million people have been infected since the appearance of the virus in Brazil in 2015. Approximately 80% of infected patients are asymptomatic. An association with microcephaly and other birth defects as well as Guillain-Barre Syndrome has led to a World Health Organization declaration of Zika virus as a Public Health Emergency of International Concern in February 2016. Zika virus is a vector-borne disease transmitted primarily by the Aedes aegypti mosquito. Male to female sexual transmission has been reported and there is potential for transmission via blood transfusions. After an incubation period of 2–7 days, symptomatic patients develop rapid onset fever, maculopapular rash, arthralgia, and conjunctivitis, often associated with headache and myalgias. Emergency department (ED) personnel must be prepared to address concerns from patients presenting with symptoms consistent with acute Zika virus infection, especially those who are pregnant or planning travel to Zika-endemic regions, as well as those women planning to become pregnant and their partners. The identify-isolate-inform (3I) tool, originally conceived for initial detection and management of Ebola virus disease patients in the ED, and later adjusted for measles and Middle East Respiratory Syndrome, can be adapted for real-time use for any emerging infectious disease. This paper reports a modification of the 3I tool for initial detection and management of patients under investigation for Zika virus. Following an assessment of epidemiologic risk, including travel to countries with mosquitoes that transmit Zika virus, patients are further investigated if clinically indicated. If after a rapid evaluation, Zika or other arthropod-borne diseases are the only concern, isolation (contact, droplet, airborne) is unnecessary. Zika is a reportable disease and thus appropriate health authorities must be notified. The modified 3I tool will facilitate rapid analysis and triggering of appropriate actions for patients presenting to the ED at risk for Zika.

As hospitals across the nation were preparing for the
possibility of Ebola or Middle Eastern respiratory syndrome
(MERS-CoV) cases, healthcare workers underwent intricate
training in the use of personal protective equipment (PPE).
An Ebola or MERS-CoV patient requiring intubation places
a healthcare worker at risk for exposure to bodily secretions.
The procedure must be performed only after appropriate
PPE is donned.1
Intubating while wearing PPE is yet another
challenge identified in caring for these patients. Manual
dexterity and free movement decreases when wearing PPE,
and may increase length of time to successful intubation. 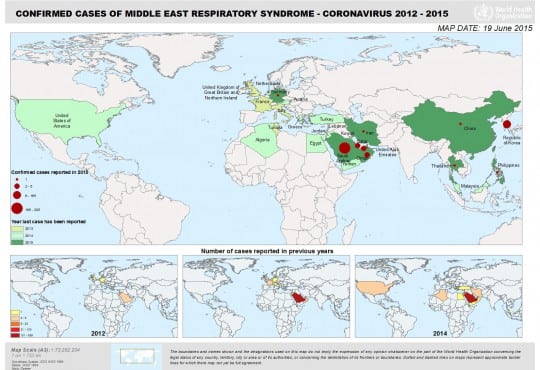 Identify-Isolate-Inform: A Modified Tool for Initial Detection and Management of Middle East Respiratory Syndrome Patients in the Emergency Department

Middle East respiratory syndrome (MERS) is a novel infectious disease caused by a coronavirus
(MERS-CoV) first reported in Saudi Arabia in September 2012. MERS later spread to other countries
in the Arabian Peninsula, followed by an outbreak in South Korea in 2015. At least 26 countries
have reported MERS cases, and these numbers may increase over time. Due to international
travel opportunities, all countries are at risk of imported cases of MERS, even if outbreaks do not
spread globally. Therefore, it is essential for emergency department (ED) personnel to be able to
rapidly assess MERS risk and take immediate actions if indicated. The Identify-Isolate-Inform (3I)
tool, originally conceived for initial detection and management of Ebola virus disease patients in the
ED and later adjusted for measles, can be adapted for real-time use for any emerging infectious
disease. This paper reports a modification of the 3I tool for use in initial detection and management
of patients under investigation for MERS. Following an assessment of epidemiologic risk factors,
including travel to countries with current MERS transmission and contact with patients with confirmed
MERS within 14 days, patients are risk stratified by type of exposure coupled with symptoms of fever
and respiratory illness. If criteria are met, patients must be immediately placed into airborne infection
isolation (or a private room until this type of isolation is available) and the emergency practitioner
must alert the hospital infection prevention and control team and the local public health department.
The 3I tool will facilitate rapid categorization and triggering of appropriate time-sensitive actions for
patients presenting to the ED at risk for MERS.