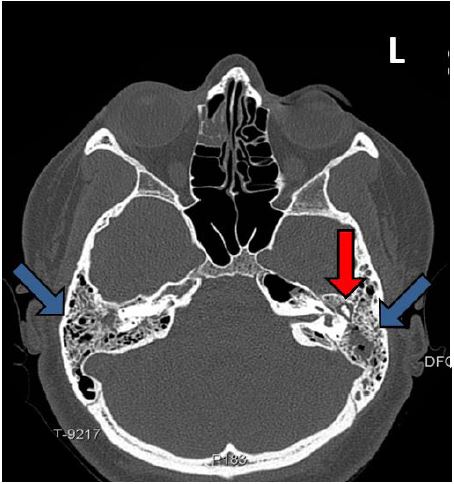 Image 2
Coronal computed tomography of the mastoid demonstrates an intact right tympanic membrane with fluid in the middle ear (blue arrow). The left external auditory canal is filled with bubbly fluid, which communicated directly with the left middle ear due to a ruptured tympanic membrane (red arrow). 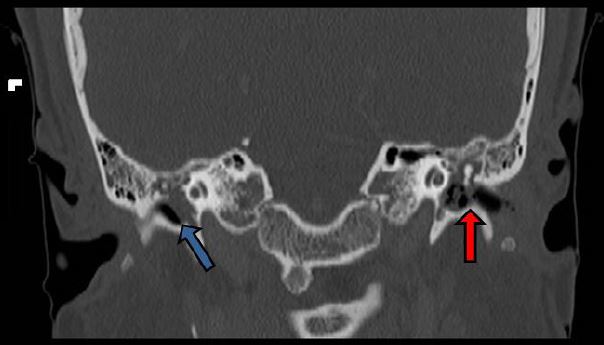 Acute mastoiditis (AM) is a rare but dangerous complication of otitis media (OM) with incidence of less than one per year per 100,000, primarily affecting children (median age 2.5 years)1,2,3,4,5 Bilateral AM is uncommon in children (0.3% of all AM cases), but has not been reported in healthy adults. Neither has postpartum AM been described. No CT images of AM in adults have been published. The aditus ad antrum is an anatomic connection between the middle ear and the mastoid antrum. Blockage, typically a result of swelling, traps infectious material in the antrum and prevents re-aeration. Causative organisms are similar to acute OM, including Streptococcus pneumoniae (most common), Group A streptococcus, Staphylococcus aureus, and Haemophilus influenza.2,3,4,6

The mastoid air cells are in close proximity to the posterior cranial fossa, lateral sinuses, facial nerve canal, semicircular canals, and the petrous tip of the temporal bone. Erosions and coalescence of air cells can cause temporal lobe abscess, lateral sinus septic thrombosis, facial nerve palsy, or meningitis.7,8,9 Ceftriaxone and vancomycin were administered intravenously to the patient, and she was admitted to medicine. Ear, nose and throat consult recommended amoxicillin clavulanate and ciprofloxacin/dexamethasone ear drops. Symptoms and exam were improved at follow-up four days later.

Mastoiditis is uncommon, affecting mostly children. Bilateral disease has not been reported in healthy adults, but may cause abscess or meningitis.

What is the major impact of the image?

Emergency clinicians should recognize historical and physical exam features of mastoiditis and have an appreciation of radiographic findings to expedite definitive treatment of the patient.

The images serve as a primer for recognition of mastoiditis, and remind the emergency provider that otitis externa is not always a benign process, but may progress to more serious disease.

Conflicts of Interest: By the CPC-EM article submission agreement, all authors are required to disclose all affiliations, funding sources and financial or management relationships that could be perceived as potential sources of bias. Dr. Canine is active duty with the U.S. Army, but received no special funding for this work or submission. No other conflicts to report for Dr. Canine or Dr. Masullo. The opinions or assertions contained herein are the private views of the authors and are not to be construed as official or reflecting the views of the Department of the Army or the Department of Defense.

4. Stenfeldt K, Hermansson A. Acute mastoiditis in southern Sweden: a study of occurrence and clinical course of acute mastoiditis before and after introduction of new treatment recommendations for AOM. Eur Arch Otorhinolaryngol. 2010;267(12):1855-61.