Screening for QT Prolongation in the Emergency Department: Is There a Better “Rule of Thumb?”

Identification of QT prolongation in the emergency department (ED) is critical for appropriate monitoring, disposition, and treatment of patients at risk for torsades de pointes (TdP). Unfortunately, identifying prolonged QT is not straightforward. Computer algorithms are unreliable in identifying prolonged QT. Manual QT-interval assessment methods, including QT correction formulas and the QT nomogram, are time-consuming and are not ideal screening tools in the ED. Many emergency clinicians rely on the “rule of thumb” or “Half the RR” rule (Half-RR) as an initial screening method, but prior studies have shown that the Half-RR rule performs poorly as compared to other QT assessment methods. We sought to characterize the problems associated with the Half-RR rule and find a modified screening tool to more safely assess the QT interval of ED patients for prolonged QT.

When compared to other methods of QT correction, the Half-RR rule appears to be more conservative at normal and elevated heart rates, making it a safe initial screening tool. However, in bradycardia, the Half-RR rule is not sufficiently sensitive in identifying prolonged QT. Adding a fixed QT cutoff of 485 milliseconds (ms) increases the sensitivity of the rule in bradycardia, creating a safer initial screening tool.

For a rapid and more sensitive screening evaluation of the QT interval on electrocardiograms in the ED, we propose combining use of the Half-RR rule at normal and elevated heart rates with a fixed uncorrected QT cutoff of 485 ms in bradycardia.

In the emergency department (ED), emergency providers encounter patients with prolonged QT for many reasons, including drug overdose, hypokalemia, hypomagnesemia, and therapeutic use of QT-prolonging medications. QT prolongation is a known risk factor for torsades de pointes (TdP). While TdP often self-terminates, it can be associated with hemodynamic instability and collapse and may degenerate into ventricular fibrillation and resultant cardiac death. Identifying ED patients with prolonged QT and risk of TdP is crucial to allow for appropriate monitoring, interventions, and disposition.

Unfortunately, computer electrocardiogram (ECG) algorithms are unreliable in identifying prolonged QT. Prior studies have shown that computer ECG algorithms are often inaccurate in measuring QT interval, particularly in abnormal or poor-quality ECGs. 1 Additionally, when these algorithms do identify prolonged QT, they often fail to report the findings in the computer-generated diagnostic statement. 1,2 For this reason, clinicians should not rely on computer algorithms; they should have an independent method of assessing the QT interval so as not to miss this critical diagnosis.

The “rule of thumb” or “Half the RR” (Half-RR) rule is one such option. It estimates the QT segment to be prolonged if it occupies greater than one-half the R wave to R wave interval, and is a favored clinician screening tool due to its ease of use. Other options for clinician-driven QT interval assessment are more laborious. QT correction formulas require the user to measure the raw QT interval, then calculate a “corrected” QT (QTc) to determine QT prolongation. QTc formulas have their own associated errors, and no QTc formula is clearly superior. 3-7 The Chan QT nomogram offers an outcome-oriented assessment of the QT interval but requires the user to plot the raw QT interval against heart rate to determine whether the patient is at risk of TdP. 8 This clinically-oriented approach is promising but has not been prospectively validated and requires additional analysis on the part of the clinician, which limits its widespread use.

We used R software (open source, version 3.4.4) to create graphs comparing the prediction of the Half-RR rule to various common QT assessment methods, including the Chan QT nomogram and the Bazett, Fridericia, Framingham, and Hodges QTc formulas. These graphs considered all possible QT-heart rate pairs, with QT intervals ranging from 300 milliseconds (ms) to 1000 ms and heart rates ranging from 40 beats per minute (bpm) to 150 bpm. The prediction of the given QT correction method (ie, prolonged vs not prolonged QT interval) for each QT-heart rate pair was calculated and is reflected on the graph. For the QT correction formulas, a QTc of 485 ms and higher was considered prolonged. We chose this value recognizing that the upper limit of normal for QTc varies by gender and formula used. While no perfect cutoff has been established, prior studies suggest that a QTc of 485 ms is beyond the upper limit of normal in both genders and in all formulas used in this study. 4,7

We then created a series of agreement graphs to better identify occasions that prediction of the Half-RR rule differed from the other methods. All possible QT-heart rate pairs were plotted and identified as “prolonged” or “not prolonged” according to the correction method used in that graph. We then compared the Half-RR graph to each of the various other QT assessment methods to highlight areas of agreement and disagreement between the Half-RR rule and that particular method.

The “Half the RR” (Half-RR) rule is a popular screening tool for prolonged QT, but it performs poorly compared to other QT assessment methods.

To identify the pitfalls of the Half-RR rule and find a modified screening tool that safely assesses for prolonged QT.

Adding a fixed QT cutoff of 485 milliseconds in bradycardia increases the sensitivity of the Half-RR rule, creating a safer screening tool.

Using this modified rule will enhance screening for prolonged QT and improve the identification of patients at acute risk of torsades de pointes and sudden cardiac death.

The performances of the various QT assessment methods over a range of QT interval and heart rate pairs is depicted in Figure 1. 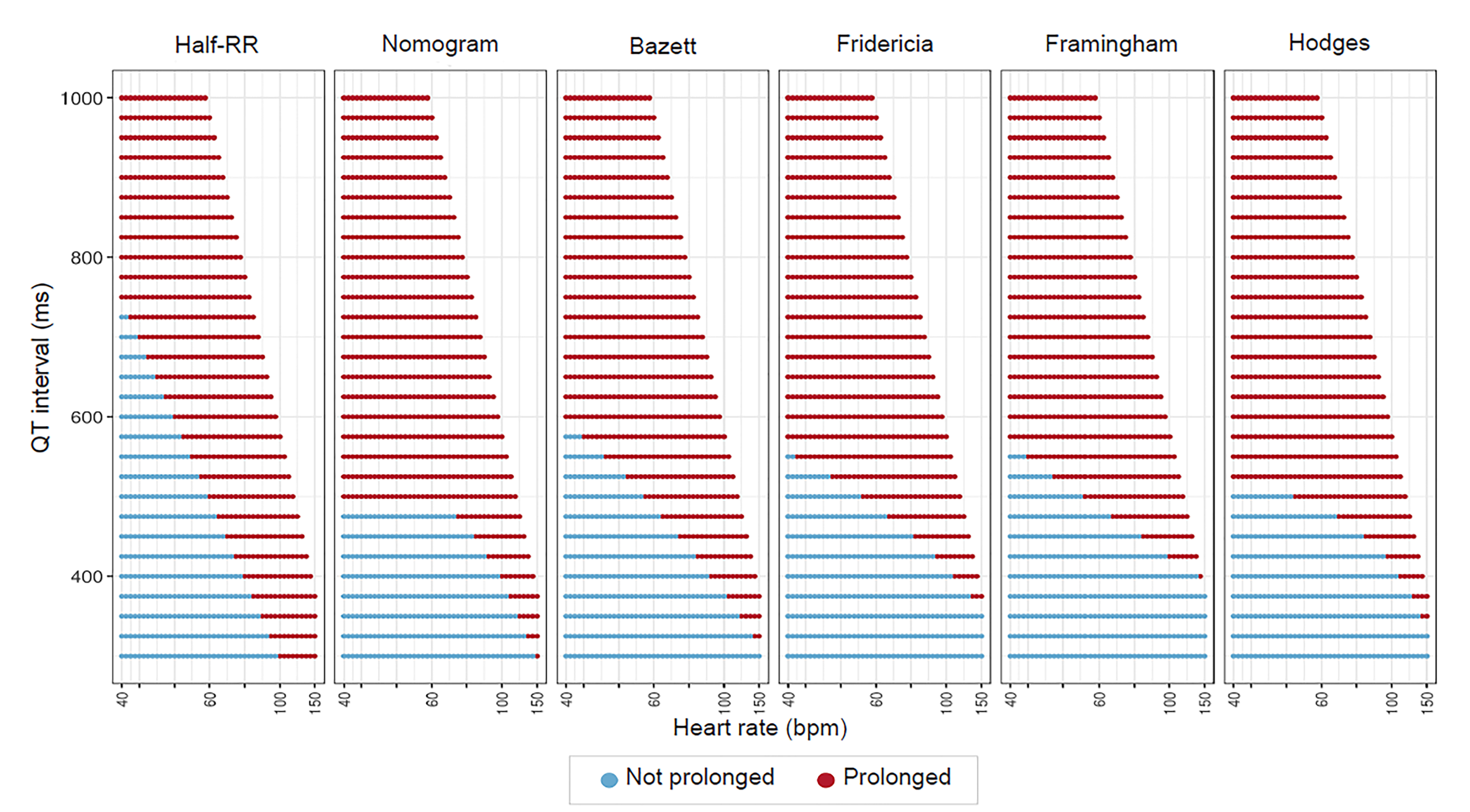 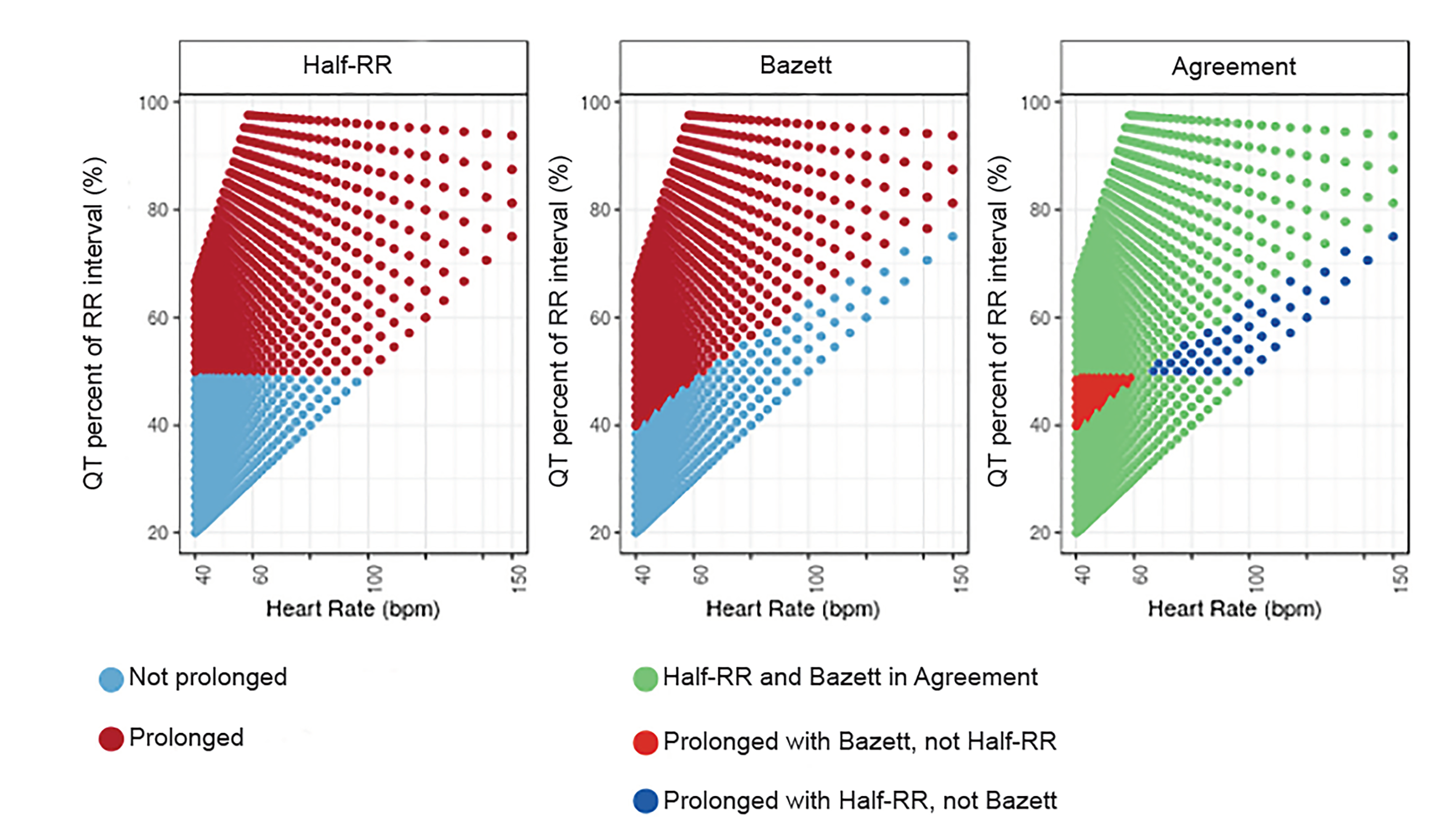 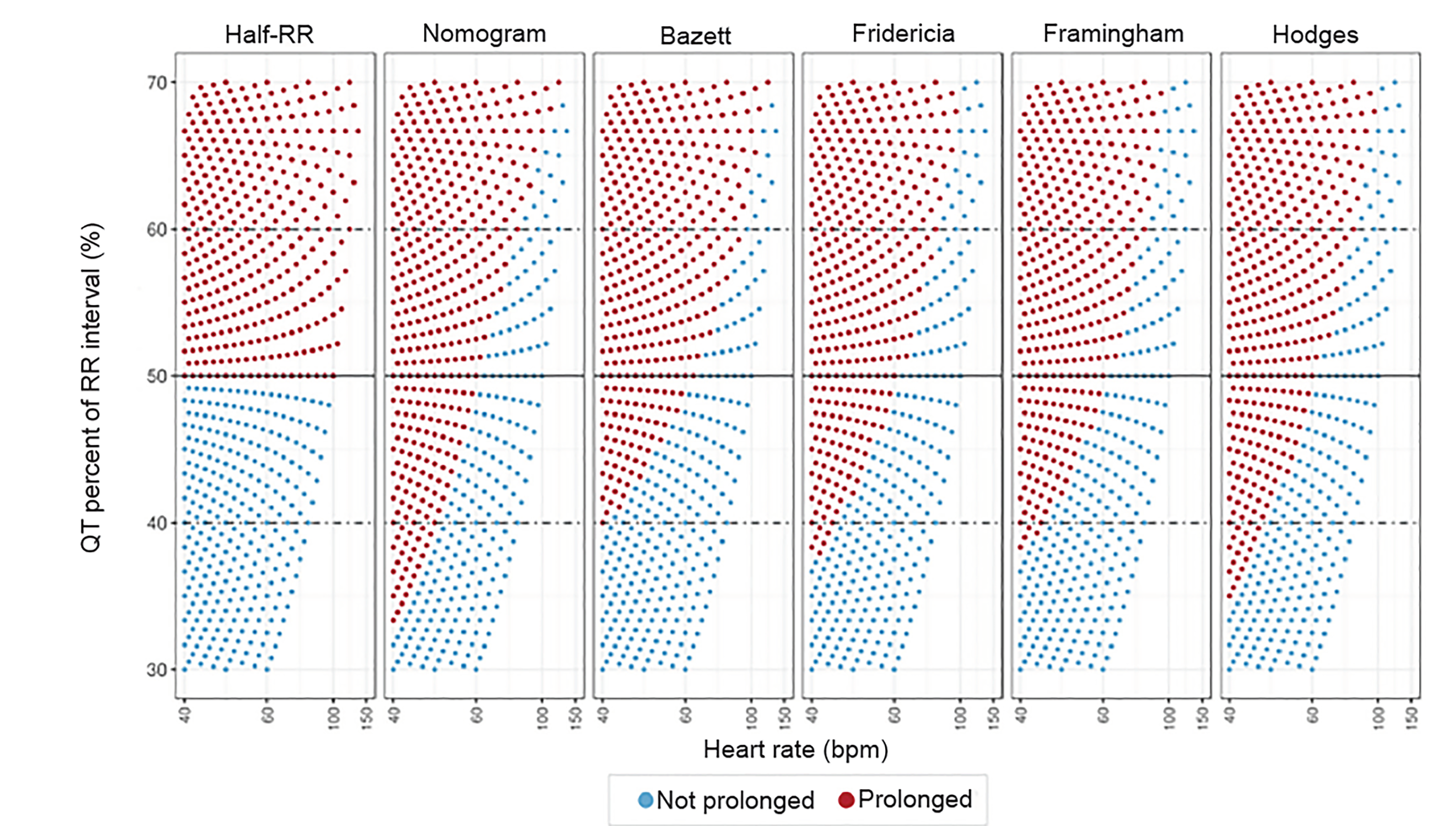 Keeping in mind our goal of creating a screening rule for clinicians to use to routinely assess QTc prolongation by mental math, we developed several new rules of thumb aimed at improving the sensitivity of the rule in bradycardia without sacrificing specificity at higher heart rates. The proposed rules (Table 1) focus on percentages and fixed cutoffs so that they would be easy to calculate and remember.

The proposed screening rules were compared to the QT nomogram given its promising data and clinically-oriented focus. Figure 5 demonstrates how the increasingly complex rules successively fill in the additional area where the traditional half-RR rule of thumb disagrees with the nomogram.

Figure 5
Comparison of the performance of various, newly proposed “rules of thumb.” The proposed “fixed” rule most closely mimics the QT nomogram and improves the sensitivity of the Half-RR rule in bradycardia. 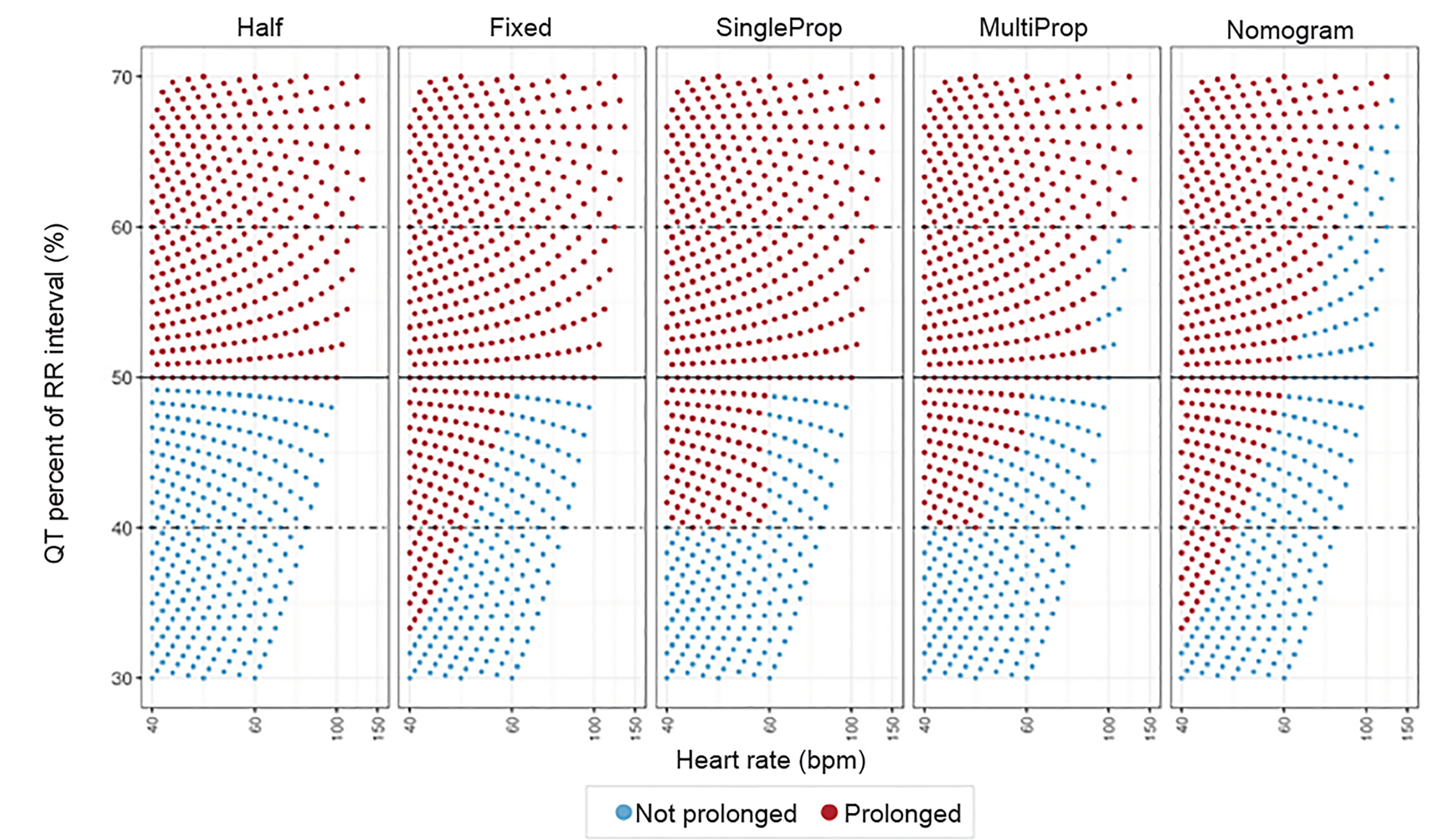 Table 2Diagnostic test characteristics of the proposed rules of thumb compared to the Chan nomogram.

The Half-RR rule is used primarily as a screening tool; thus, a low sensitivity in any clinical context is problematic. The poor sensitivity in bradycardia is of particularly serious concern given that patients are most clinically at-risk of TdP when they are bradycardic due to the pause-dependent TdP phenomenon. Lowering the percentage used in the rule of thumb was not an acceptable solution to this problem, as doing so negatively impacted the specificity of the rule. Of the newly considered modified rules of thumb, the “fixed” rule adds a simple modification to the Half-RR rule to resolve the poor sensitivity in bradycardia. For heart rates below 60 bpm, the raw QT is declared prolonged when above 485 ms, achieving excellent sensitivity (100%, CI, 99.5–100.0%) without unduly decreasing specificity.

At normal and elevated heart rates, our analysis shows that the Half-RR rule is more conservative than other QT assessment methods and produces many more apparent false positives. The new “fixed” RR rule does not address this issue. Thus, if the “fixed” RR rule deems a QT interval “prolonged” at any heart rate above 66 bpm, the clinician should proceed with formal measurement and risk assessment based on the QT nomogram or one of the correction formulas.

The proposed “fixed” RR rule is simple to use and remember. It is a safe and realistic initial screening tool for QT prolongation for emergency clinicians. Using this screening tool should improve recognition of prolonged QT in bradycardia in the ED and assist clinicians in safely “ruling-out” prolonged QT at normal and elevated heart rates.

There are several limitations to this discussion. First, the Half-RR rule ideally would be evaluated by comparing it to a gold-standard formula or nomogram that has been carefully calibrated against a large database with mortality as the outcome. Such a gold standard does not exist. The existing QT correction rules were not derived with mortality outcomes in separate validation samples, although the Bazett correction has been used to correlate long QTc with long-term, but not short-term, outcomes. 9 Instead, we compared the Half-RR method to each of the four formulas and the QT nomogram, effectively substituting usual care for the unattainable gold standard.

Second, these measures depend on the population values. While sensitivity and specificity do not vary with population prevalence in theory, in practice they seem to do so. 10 Since we have arbitrarily generated a population of values, these values may change slightly if we knew that particular ratios of RR intervals to QT intervals were more common. Still, in the absence of data on prevalence of RR and QT pairs in the ED, it is difficult to improve upon this strategy of comparing to the existing – and more complicated – rules.

Finally, the above discussion implies that the variation of QT interval across heart rates is alike in all individuals. However, a substantial body of research shows that there is great interindividual variability and even intrasubject variability. 3,11,12 The most accurate way to know a patient’s true corrected QT at a given heart rate is to measure and plot the individual patient’s QT interval over a range of heart rates. Of course, this task is not realistic in the ED setting. The discussion and strategies offered above provide a reasonable and more realistic approach to QT interval assessment without highly personalized patient data.

Recognizing and addressing prolonged QT intervals is critical in the ED. Accurately identifying patients with dangerously prolonged QT intervals allows emergency clinicians to intervene on patients who are at acute risk of TdP and to avoid discharging patients at risk of sudden death. There are many complexities in measuring and correcting the QT interval, and, unfortunately, computer algorithms cannot be relied upon for accurate QT measurement and correction. When the heart rate is above 60 bpm, the Half-RR rule is a conservative screening tool and may be safely used. In bradycardia, the Half-RR rule is prone to false negatives and should not be used. Instead, a fixed cutoff of 485 ms is likely a better measure, but further validation is required.

Emergency Department Patients Who Leave Before Treatment Is Complete