Firearm injuries can result in a myriad of health outcomes, with both short- and long-term sequelae, including spinal cord injuries (SCI). Firearms are the main cause of traumatic spinal cord injuries in Brazil (28.4%). This rate varies from one country to another, dropping down to 8.4% in Thailand and as low as 1.9% in Turkey.5-7 In the US, 12.2% (784 out of a total of 17,730 new annual SCIs) are secondary to gunshot injuries.8,9 Spinal cord injuries also result in a significant health and financial burden at the level of the individual patient and their families, as well as at the level of the healthcare system. Less than 1% of affected individuals achieve complete neurological recovery upon hospital discharge, with the most frequent sequela being incomplete tetraplegia. Mortality rates are also highest during the first year post-injury.10

In contrast to most injuries that take priority in the management of trauma cases, SCIs can often be missed initially and not detected until later in the management process via imaging. They are often obscured by the presence and or need to manage more life-threatening concomitant injuries, particularly severe head trauma or hemorrhage, in addition to the performance of emergent procedures such as intubation, sedation, and surgical procedure.6,11-12

This is the first study to identify general and clinical predictors of firearm-induced SCI and/or vertebral column injury (VCI), which would serve as cues for earlier detection and management of SCI/VCIs.

This study examines firearm-related spinal cord injuries in adult trauma patients in the US and identifies predictors of presence of such injuries in this patient population.

For this retrospective cohort study we used the public release dataset from the 2015 National Trauma Data Bank (NTDB). This dataset is an annually issued, US population-based, multicenter cohort and is considered the largest aggregation of US-based trauma registry data.13 The institutional review board at the American University of Beirut approved the use of the de-identified dataset to conduct this study. 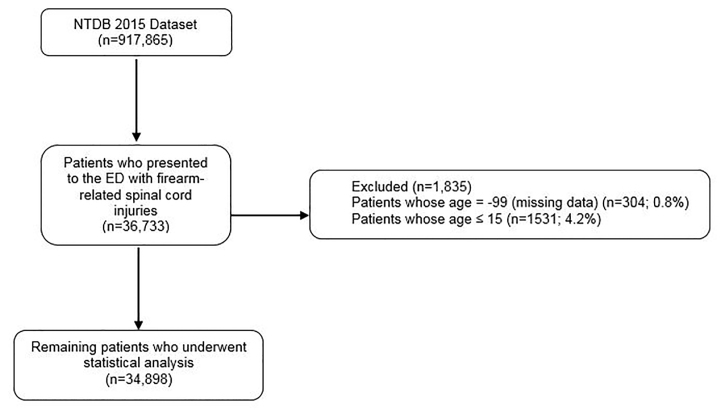 Firearm-related spinal cord injuries (SCI) are commonly missed in the initial assessment as they are often obscured by more life-threatening injuries.

This study examines firearm-related SCI in adult trauma patients and identifies predictors of such injuries.

SCI and/or vertebral column injury (VCI) were present in 7.9% of adult patients with trauma. Several clinical and non-clinical predictors were identified.

The identified predictors can help with early detection of SCI/VCI injuries, avoid management delays, and improve outcomes of trauma patients.

We conducted descriptive analyses to summarize the categorical variables by calculating their frequencies and percentages and to present the mean ± standard deviation (SD) of the continuous variables. Comparison of the percentages of all categorical variables according to the two groups of the cord injuries (none vs SCI and/or VCI) was done by using Pearson’s chi-square test. Due to the non-normal distribution, we used the Mann-Whitney test instead of Student’s t-test to compare the means of the continuous variables. More than 5% of the variables (ethnicity, whether patient used alcohol, whether patient used drug, the patient’s primary method of payment) were categorized as being not known/not recorded, and as a result we performed multiple imputation procedures to account for these missing data and thus to provide accurate estimates.

We conducted a multivariate logistic regression using a backward selection procedure to determine the predictors of SCI/VCI in patients with firearm-related injury. A receiving operating characteristic (ROC) curve was plotted to assess the validity of the logistic regression results. It indicated that the generated model discriminated excellently patients with no SCI or VCI from those with SCI and/or VCI (area under the ROC curve = 0.9, 95% confidence interval (CI), 0.88 – 0.89, P<0.001). Statistical significance was considered at an alpha value set at 0.05 and below. We performed analyses using the SPSS 24 (IBM Corporation, Armonk, NY) statistical package.

Table 1Demographics of the general study population and the two groups: patients with no spinal cord injury (SCI) or vertebral column injury (VCI), and patients with SCI and/or VCI.

*The Mann-Whitney test was used to calculate the P-value.
**Missing values were disregarded when calculating percentages.
†“Other” race includes Asian, American Indian, Native Hawaiian, or other Pacific Islander and other race.
‡P-values are comparing the “no SCI or VCI” group to the “SCI and/or VCI” group.

Table 2Firearm injury characteristics and locations of the general study population and the two groups: patients with no spinal cord injury (SCI) or vertebral column injury (VCI) and patients with SCI and/or VCI.

Table 3Outcomes of the general study population and the two groups: patients with no spinal cord injury (SCI) or vertebral column injury (VCI) and patients with SCI and/or VCI.

This retrospective cohort study of 2768 patients who sustained a firearm-induced injury to the spinal cord or vertebral column is the largest to date to report on such injuries. With the exception of a study conducted by Jain et al on traumatic spinal cord injuries in general in the US,8 most studies were limited to small sample sizes and to single centers. Firearm-induced SCIs are relatively uncommon. The rate of SCI and/or VCI in firearm injuries in the current study was found to be 7.9%. This rate of SCI and/or VCI is lower than the previously reported rates of 10%12 and 23%15 among the civilian population, and the 11.10%16 rate of combat firearm injuries in the military population. The difference in rates across different studies is probably related to civilian vs military setting characteristics and firearms types.

While the mortality rate was not different among patients with SCI or VCI compared to those without, patients with firearm-induced SCI and/or VCI had more severe injuries than those without SCI or VCI. They more frequently had higher ISS, lower GCS scores, and lower SBP. These findings further reiterate the high impact of spinal injuries on affected victims in terms of clinical outcomes. However, this analysis may have missed patients with severe injuries or those who died from other major injuries, as they may not have survived long enough for evaluation for SCI and/or VCI.

Patients with SCI and/or VCI were more commonly found to have concomitant fractures, internal organ injuries, and blood vessel injuries compared to patients with no SCI or VCI. Furthermore, the injury location among patients with SCI and/or VCI involved the torso and head and neck more commonly than those with no SCI and/or VCI injury. These findings are in line with those of a previous study that examined patients who presented with gunshot wounds to the trunk, neck, or head over a 10-year period to a trauma center in Miami, Florida, where concomitant spine injuries were found in 10% of cases. It is worth noting that in the latter study, 13% of the detected cases of spine injuries were unsuspected, particularly when they involved the face (75%), abdomen (27%), chest (10%), shoulder (10%), back (5%), and flank (5%), but not the head.12

The mean length of hospital stay of 13.8 days (± 17.3) is slightly higher than the mean of 11 days reported by the National Spinal Cord Injury Statistical Center. Rehabilitation duration is not reported in the NTDB, but the national average rehabilitation length of stay is estimated to be around 31 days.10 The intensive care unit stay and ventilator days in the current study were also found to be significantly higher for patients with SCI and/or VCI compared to none. This translates into high healthcare costs secondary to firearm-induced SCI and/or VCI. According to the National Spinal Cord Injury Statistical Center, the average yearly expenses of affected individuals vary between US dollars $44,766 – $1,129,302, depending on the degree of neurological impairment, level of education, and pre-injury employment history.10 This is important in estimating the potential impact of the high cost of care of these injuries on patients and the government, especially given that a large portion of the study population is covered by Medicaid. Mitigation strategies, such as the adoption and enforcement of strict gun control laws, are needed to prevent such injuries and reduce their financial burden on affected victims.

This study is the first to identify predictors of firearm-induced SCI and/or VCI. A previous study examined prehospital predictors of traumatic spinal cord injuries in general: male gender; neurological deficit; altered mental status; high falls; diving injuries; and bike/motorbike collisions.17 Main predictors for firearm-induced SCI and/or VCI included unintentional injuries, assault forms of injuries, public or unspecified location of injuries, concomitant drug use by the subject, injury of the torso, as well as concomitant fractures, injuries to blood vessels, internal organs, or open wounds. Familiarity with these predictors is important for emergency providers, which would translate into earlier detection and management of SCI and/or VCI injuries and ultimately improved patient outcomes. Nevertheless, the full clinical utilization of such predictors, among others, would require further studies and the development and verification of clinical prediction rules.

This study did have a number of limitations. While the NTDB cohort is the largest registry representative of US-based trauma, some data elements that better characterize firearm-induced SCI and/or VCI (such as types of firearms, interval neurological examinations, and neurological outcomes at discharge) are not collected or reported. For instance, low GCS may be related to different factors and not limited to traumatic brain injury, which is not specified in the NTDB. While missing data is also considered a limitation of this study, the latter was addressed in the analysis via multiple imputations. Despite these limitations, the findings of this study, which used the NTDB dataset, apply in hospitals and trauma centers across the US and in similar clinical settings.

Firearm-induced spinal cord and/or vertebral column injuries have a high burden on affected victims. This study identifies important general and clinical predictors for the presence of these injuries in trauma patients with firearm injuries. These predictors can help physicians suspect and detect the presence of SCI and/or VCI injuries for earlier management in order to improve outcomes of affected patients. Future studies involving databases with more detailed, neurological clinical data points can help further define the impact of such injuries on affected victims.

The Challenging Case Conference: A Gamified Approach to Clinical Reasoning in the Video Conference Era