This was a retrospective cohort study of patients 65 years and older evaluated with a cervical spine MRI following a ground-level fall. Inclusion criteria included age 65 years and older, ground-level fall, normal cervical spine CT followed by a cervical spine MRI. We abstracted data following accepted methodologic guidelines. Patients with any focal neurological finding were considered to have an abnormal neurological examination. Imaging studies were considered to be abnormal if there was a report of an acute traumatic injury. The primary outcome was a traumatic abnormality identified on MRI. We described data with simple descriptive statistics.

As the population ages, ground-level falls in older adults are an increasing presentation to emergency departments (ED).1,2 These visits are costly and often involve extensive diagnostic evaluations.3 Evaluating older patients following a ground-level fall with a suspected acute cervical spine injury can be challenging due to pre-existing neurologic deficits, frailty, and cognitive impairment. Furthermore, degenerative and osteoporotic changes frequently occurring in the elderly make cervical spine radiographic interpretations difficult. These factors along with limited research contribute to uncertainty in the appropriate radiologic evaluation of the cervical spine in this population.

This was a retrospective, observational cohort study using data from the site’s electronic health record (EHR). The study was approved by the institutional review board.

The study site is an urban, academic, Level I trauma center. The annual ED volume is approximately 66,000 adult patients. The trauma service admits approximately 3500 patients annually. Inclusion criteria consisted of patients 65 years of age and older who had a ground-level fall with a cervical spine CT without evidence of an acute injury and then underwent sequential cervical spine MRI. Exclusion criteria included interfacility transfers, prisoners, patients without falls, those being evaluated for advanced malignancy or other established pathology, or whose initial CT showed an acute injury.

We identified eligible patients from an EHR search for cervical spine MRI orders placed in the ED from May 23, 2017–May 22, 2019. The following elements were directly extracted from the EHR: gender; age; date and time of presentation; and MRI cervical spine order. The EHR was manually reviewed for inclusion and exclusion criteria; 341 patient charts were reviewed, and 87 patients met the final criteria. Manual abstraction of data from the EHR followed the Gilbert methodologic guidelines.14,15 The primary abstractor was trained prior to data abstraction, and investigators met after abstracting 10 charts for abstraction review. The following elements were manually abstracted from the EHR using a standardized form designed a priori: ground-level fall; trauma team activation; midline cervical spine tenderness; documentation of focal neurological deficit; history of cognitive impairment; altered mental state; evidence of intoxication; Charlson Comorbidity Index including anticoagulation use; CT and MRI reports; hospital admission; outcomes; and cervical spine interventions.16 Clinical findings not explicitly stated as present were considered absent. We calculated ED length of stay, Injury Severity Score (ISS) and revised trauma score from data directly and manually abstracted from the EHR.

Is a negative computed tomography (CT) sufficient to exclude clinically significant injuries in older patients who have fallen?

Magnetic resonance imaging (MRI) in older patients who have fallen is generally unnecessary after a normal, atraumatic CT scan.

MRI after a normal cervical spine CT scan rarely contributes clinically significant information in older patients after a fall and adds time and expense to the emergency department stay.

One reviewer who was blinded to the study’s hypothesis abstracted patient data for all outcomes. An independent reviewer randomly selected 20 charts to measure abstractor reliability. Study data were collected and managed using Research Electronic Data Capture tools (REDCap, Vanderbilt University, Nashville, TN) hosted at the University of California, Davis.17,18 The primary outcome was any acute traumatic injury identified on the cervical MRI.

We desctibe data with simple descriptive statistics. Continuous data are described with the median and interquartile range (IQR). We calculated 95% confidence intervals (CI) where appropriate. Inter-rater agreement for duplicate data abstraction was measured with the kappa statistic.

A total of 341 older patients underwent cervical spine MRI imaging ordered in the ED during the 24-month study period. This study included 87 patients who met all the inclusion/exclusion criteria (Figure); there were no duplicate encounters. The median age was 74 (IQR 69, 83) years, and 48 (55%, 95% CI, 44–66%) were female. The median ED length of stay was 8.2 (IQR 5.3, 13.5) hours. Overall, 72 patients (82.75%) received a trauma team activation on ED arrival. Indications for cervical spine MRI were not consistently documented in the EHR. 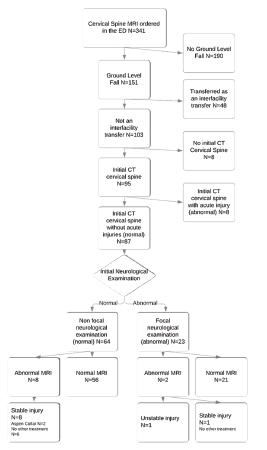 One patient (1.1%) was ultimately diagnosed with an unstable cervical spine injury and received the highest level trauma activation on arrival to the ED for mild weakness in the upper extremities and severe bilateral lower extremity weakness. Initial cervical spine CT did not show evidence of an acute injury. Cervical spine MRI revealed radiologic evidence of a central cord syndrome with a large C4 disc protrusion with cord compression and edema. The patient subsequently underwent a C3–C6 laminectomy. In the other 22 patients with an initial abnormal neurological examination, the initial focal deficit either resolved or was found to be non-acute/chronic. Inter-rater agreement for duplicate abstraction ranged from kappa = 0.47 (moderate) to 1.0 (perfect).

One patient presented with clinical evidence of an unstable cervical injury; the cervical spine CT did not show acute injuries, even on repeat radiological interpretation, and the MRI revealed a large C4 disc protrusion with cord compression and edema. The patient ultimately underwent operative stabilization for this injury.

Patients with acute traumatic injuries on cervical spine CT routinely undergo MRI for further injury delineation and evaluation of the spinal cord. In addition, cervical spine MRI continues to be recommended in obtunded patients after a nondiagnostic cervical spine CT if concerns for a cervical ligamentous injury exist.19 The EAST trauma practice guidelines for advanced imaging and cervical spine clearance in obtunded trauma patients, however, were recently revised, recognizing that high-quality CT identifies the majority of clinically significant injuries and noting that injuries found only on MRI are of uncertain clinical significance.20 This recommendation questions the utility of MRI after a normal CT. Older patients with dementia are usually not obtunded and can identify and communicate tenderness when carefully examined. The process of obtaining a cervical spine MRI in any trauma patient is complicated by prolonged cervical spine precautions, claustrophobia during the scan and, typically, delays in disposition while the MRI is obtained and resulted. Sedation was provided to one-third of this study’s patients during their ED stay, in many instances to facilitate cervical spine MRI. Sedating elderly patients should be avoided when not necessary as complications may occur.

In the current study, the reasons for an adjunctive cervical spine MRI being ordered after a normal cervical spine CT were not well documented. Almost all our patients received a trauma team evaluation on arrival, as the activation pathway prioritizes trauma patients receiving anticoagulation. Most of the patients were admitted to the hospital, despite low ISS. In this study population, baseline cognitive impairment was uncommon, few patients had an altered mental state, and very few patients were found to be intoxicated. A large minority of patients were documented to have midline cervical spine tenderness. Nearly a quarter of patients had a neurological deficit on initial examination, which was often the initial trauma examination in the resuscitation room, focused on identifying traumatic injuries. Many of these neurological deficits, however, either resolved or were found to be non-acute and did not contribute further to the admission.

This was a retrospective medical record review and subject to the limitations of this methodology. We followed the Gilbert methodologic guidelines for retrospective medical record review to limit the introduction of bias.14,15 In addition, this was a single-site study with a small sample size, limiting the generalizability of the findings. Furthermore, indications for cervical spine MRI were not defined and not consistently recorded in the EHR. Patients with similar mechanisms and ages did not all proceed with advanced imaging of the cervical spine, and some of these patients may have had MRI abnormalities if imaged. Although distracting injuries were not specifically identified in this review, all patients were ultimately discharged, and low ISS suggest the absence of other substantial injuries.