A 61-year-old female was brought in by ambulance after being the restrained driver of a head-on motor vehicle collision at 40MPH. There was positive airbag deployment and intrusion from the other vehicle. During workup, the patient complained of midline chest pain, and left chest wall pain. The patient was not in acute respiratory distress, and had the following vital signs: temperature 37°C, heart rate 84, blood pressure of 150/64, respiratory rate 18, and oxygen saturation of 97% on two liters of oxygen. On physical exam, breath sounds were heard bilaterally, with no acute cardiopulmonary issues identified. A bruise was identified on the lower abdomen, which was thought to be a potential seatbelt sign. A focused assessment with sonography for trauma was negative, and an ultrasound of additional chest and mediastinal structures was performed for the chest tenderness (Figure 1).

Figure 1
Ultrasound image of the sternum, with the red labeling the two ends of a displaced sternal fracture. 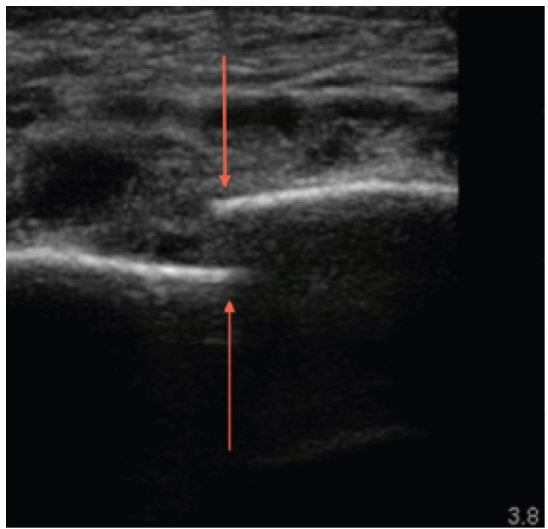 Sternal fracture has been observed in approximately 10% of patients with blunt chest trauma, with the most common mechanism of injury being motor vehicle accidents.1 Isolated sternal fractures most often have a benign course, but can rarely cause secondary cardiac injury.2 Patients with chest trauma typically undergo radiograph imaging in the emergency department to help rule out acute life-threatening cardiopulmonary injuries such as aortic dissection, tension pneumothorax, and cardiac tamponade, among other pathologies. Typically, these imaging techniques involve a portable chest radiograph, followed by a computed tomography (CT) of the chest if applicable.3 Standard AP chest radiographs have a low sensitivity for diagnosing sternal fractures, with the majority of fractures being identified by lateral chest radiograph or CT (Figure 2). Because lateral chest radiographs are typically not performed in the acute trauma workup, many sternal fractures are not diagnosed until later in the trauma evaluation.1,4 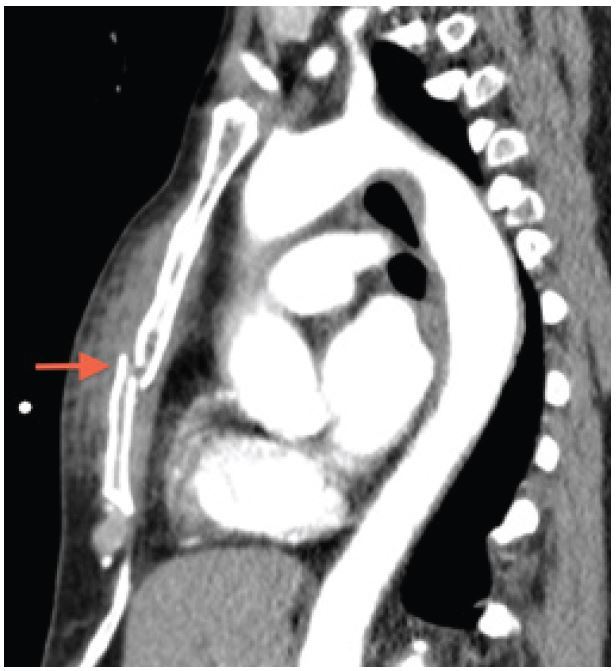